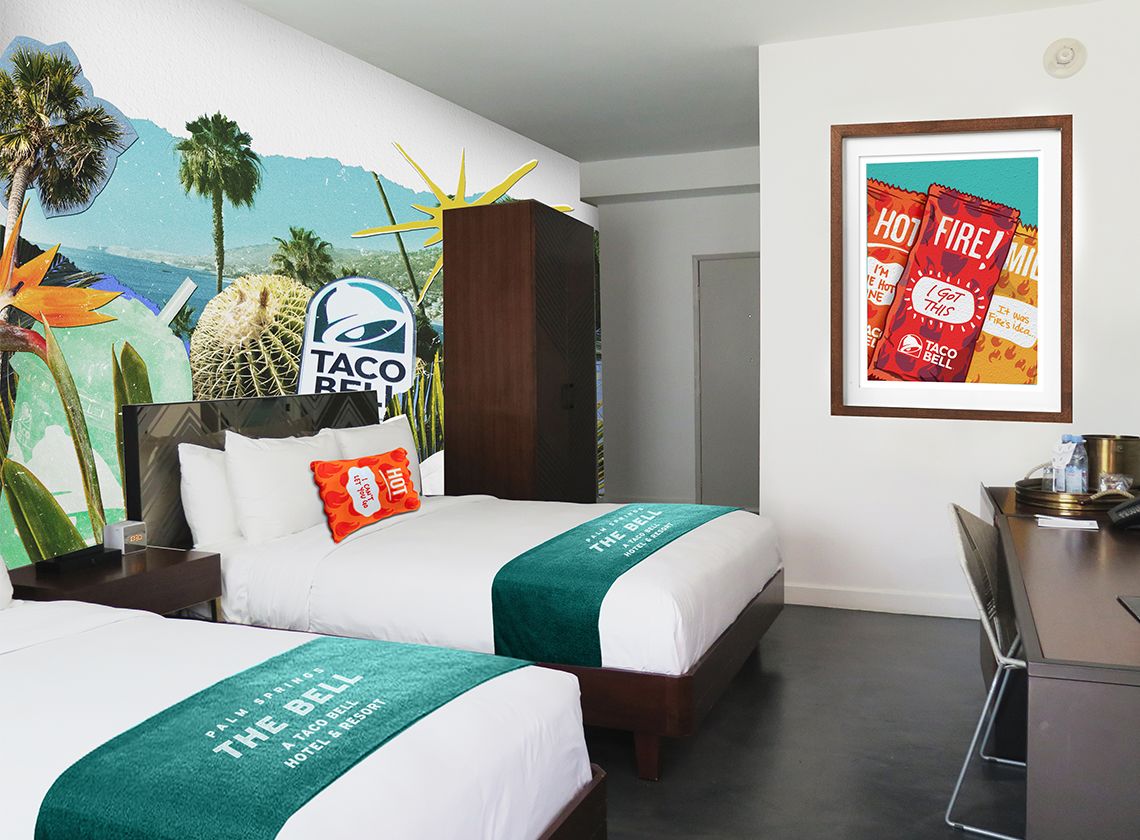 Guest room at The Bell, A Taco Bell Hotel & Resort

All available rooms were snatched up just two minutes into taking reservations. And with that, the Yum Brands unit proved once again how much its customers love Taco Bell.

The chain started taking reservations at 1 p.m. ET Thursday for the roughly 70 rooms at its Palm Springs hotel.

Less than a minute after bookings went live, the website was already overwhelmed by the demand. Some users attempting to book a room received a message saying the website was experiencing “higher than normal traffic” and to “keep your crossed fingers on that refresh button.”

“Taco Bell fans are truly one of a kind and today was one of the best expressions of that fandom yet,” Taco Bell’s Chief Global Brand Officer Marisa Thalberg said in a statement.

Rooms started at $169 per night, with no minimum required stay. The Bell, which is taking over the V Palm Springs Hotel, will open its doors August 8 and close August 12.

Taco Bell anticipated high demand for its hotel. The chain’s U.S. president, Julie Felss Masino, said that only one employee from a company-owned store will win a coveted room as part of a customer service contest.

“We’re really trying to make it a fan experience,” Masino said in an interview last week.

The Bell will also feature a gift shop with exclusive Taco Bell-themed apparel and an on-site salon with Taco Bell-inspired nail art and hair styling services. To round out the experience, hotel guests can expect performances from up-and-coming musicians, feature-length movie showings, and a lounge inspired by Mountain Dew Baja Blast.

Taco Bell has a history of connecting with its customers through off-beat experiences. Fans can get married in a Taco Bell-themed ceremony for $600 at its Las Vegas Cantina flagship location. As of May, Taco Bell has registered over 165 couples. The brand has also teamed up with fast-fashion retailer Forever 21 to sell clothes featuring its logo and imagery.

Mike Kelly, co-founder and CEO of State of Mind Partners, said a branded hotel wouldn’t be right for every fast food chain. But it fits for Taco Bell, he said.

“I think there are certain brands that sort of have this fanbase, and they also have these crazy branded products,” Kelly said.

Rent the Runway is bringing its drop boxes to Nordstrom stores
PepsiCo tests selling canned water as it looks to cut down on plastic
To Top
error: Content is protected !!