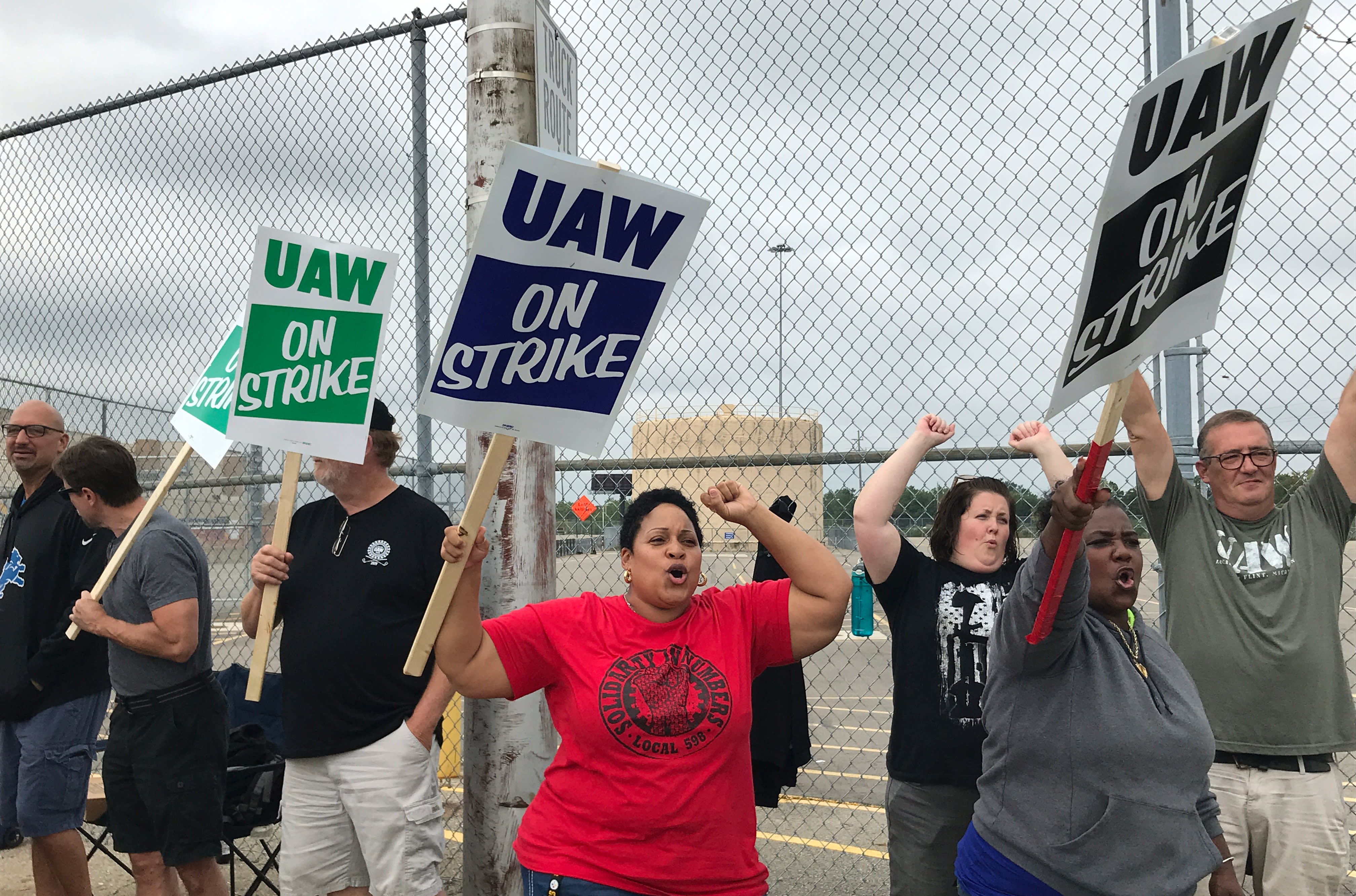 UAW members on strike outside a GM plant in Flint Michigan on Sept. 16th, 2019.Michael Wayland | CNBCFLINT, Mich. – Some United Auto Workers members walking picket lines outside General Motors plants in Michigan would like President Donald Trump to stay out of their negotiations with the automaker.”He didn’t support us when we went bankrupt. I don’t think that’s something the UAW will ever forget,” said Adriane Hall, a UAW member of 12 years who was picketing on Monday outside the automaker’s truck plant in Flint, Michigan. “He didn’t support us then, why should he say anything now?”Hall was one of roughly 48,000 of GM’s unionized employees who went on strike at midnight Sunday after contract talks between the company and union broke down over the weekend.”Here we go again with General Motors and the United Auto Workers,” Trump tweeted after union leaders called for a strike on Sunday. “Get together and make a deal!”Trump, in late 2008, supported the government in assisting the auto industry: “You have to save the car industry in this country. General Motors can be great again. Ford can be great again. And Chrysler could be great,” he told CNBC at the time.However, once Trump became a Republican candidate for president, he also voiced support for letting the car industry go bankrupt on its own.UAW members on strike outside a GM plant in Flint Michigan on Sept. 16th, 2019.Michael Wayland | CNBC”You could have let it go bankrupt, frankly, and rebuilt itself, and a lot of people felt it should happen,” Trump said during a campaign appearance in Michigan in 2015. “Or you could have done it the way it went. I could have done it either way. Either way would have been acceptable. I think you would have wound up in the same place.”Despite Trump winning the presidency as a “blue-collar billionaire,” Dekiea Rawls, a UAW worker of 12 years who works in Flint, said Trump should let the union negotiate its own contracts.”To quickly or hurry up to get a deal, I don’t think he cares too much about the union workers,” Rawls said.Judy Batterbee, a UAW member of 22 years, agreed. “I don’t feel like it’s necessary,” she said, standing with a UAW strike picket sign in her hand outside the Flint facility.Brian Pannebecker, a UAW member of 23 years with more than 30 years of experience in the auto industry, said he fully supports Trump’s public opinion the negotiations.”I have no problem with him weighing in,” Pannebecker, a Ford employee, told CNBC during a phone interview. “Nothing controversial about that. He wants labor and management to sit-down and strike a deal.”Pannebecker, organizer of a social media group called “Autoworkers for Trump 2020,” believes if Trump got more involved with the negotiations, they’d come to a better solution more quickly.”He wants us to get a good deal and he wants GM to keep the plants in the United States,” he said. “He’s a hero to most of the autoworkers. I’m 100% in favor of him weighing-in. God bless him.”A spokesman with the UAW on Sunday declined to comment on the president’s tweet. A GM spokesman said “We couldn’t agree more,” when asked about the tweet.This is the second time Trump has weighed in on the negotiations. In March, the U.S. president urged both parties to start negotiations “now” rather than wait until closer to the union’s contract expiration.”General Motors and the UAW are going to start ‘talks’ in September/October,” he tweeted on March 18. “Why wait, start them now! I want jobs to stay in the U.S.A. and want Lordstown (Ohio), in one of the best economies in our history, opened or sold to a company who will open it up fast!”

FAA chief to test out changes to Boeing 737 Max software in simulator
Netflix snags ‘Seinfeld’ as streaming wars heat up
To Top
error: Content is protected !!