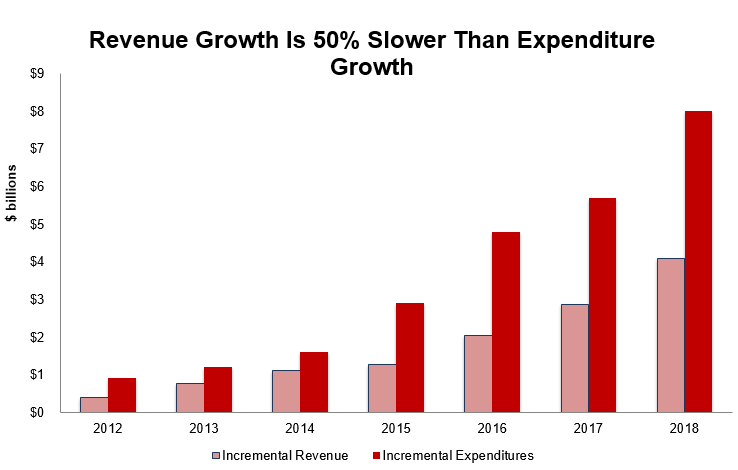 A scene from Netflix’s “Stranger Things”.

From T-shirts and collectibles to pool floats and Burger King Whoppers, it’s hard to escape the massive advertising campaign for the upcoming third season of Netflix’s hit TV show “Stranger Things” due out on July 4.

Retro Coca-Cola cans and Eggo waffle packages have been stocked on shelves, branded ice cream cartons and cakes are now in freezers at Baskin Robbins and an entire section of Target has been dedicated to housing backpacks, socks, toys and games featuring characters from the show.

The massive advertising campaign gives you a glimpse of what Netflix could be capable of if it actually owned more of its content. The company doesn’t have a consumer products arm, instead, it relies on brand partnerships. Meaning, Netflix works with retail companies to create merchandise, but doesn’t get money from licensing its brand to retailers or from the sales of that merchandise, a company spokesman said. Instead, it reaps the benefit of more exposure, as the products act as advertisements.

Baskin Robbins has partnered with Netflix to bring four collectible quarts of unique ice cream flavors to stores in honor of the third season of “Stranger Things.”

While the extensive reach of Netflix’s marketing arm is driving buzz ahead of this season of “Stranger Things,” this branding push reveals a big shortcoming in its business model: It is a perpetual renter and not an owner of content. Netflix makes the majority of its money from subscriptions. If it doesn’t want to branch out of its current strategy, it really only has three options to combat its high licensing costs: raise prices, get more subscribers or cut spending.

What ‘original’ means to Netflix

For Netflix, “original” means it’s the first market in a country to stream a show or movie. Michael Pachter, an analyst at Wedbush, estimates Netflix owns less than 10% of its original content.

It’s why you don’t see massive advertising campaigns and merchandising for shows like “The Crown,” “House of Cards,” “Orange is the New Black,” “BoJack Horseman” “Big Mouth” and “The Chilling Adventures of Sabrina.”

Netflix started out as a rental service, but morphed, partially, into a production company. Prior to 2013, Netflix relied entirely on licensing content from other brands like Disney, Warner Bros. and Universal in order to fill its library. It wasn’t until “House of Cards,” “Hemlock Grove” and “Orange is the New Black,” that Netflix had content on its platform that was made just for Netflix.

Claire Foy as Queen Elizabeth II and Matt Smith as Philip Mountbatten, Duke of Edinburgh in The Crown a Netflix Original

However, at that time, the shows were exclusively made by other companies and then licensed by Netflix. “Wet Hot American Summer: First Day of Camp,” which launched in 2015, was the first show to actually be produced and owned by the company.

To secure popular TV shows like “The Office” and “Friends” as well as to sign exclusive deals with content creators, Netflix has been burning through cash over the last decade. Guillermo del Toro (“Shape of Water”), Ryan Murphy (“Glee”) and Shonda Rhimes (“Grey’s Anatomy”), among others, have been hired to create unique content only available on Netflix. In some cases, these contracts span several years and are said to be worth hundreds of millions of dollars.

Last year, Netflix shelled out more than $12 billion to purchase, license and produce content. This year, that figure will rise to $15 billion. It will spend $2.9 billion more on marketing. These costs come as Netflix is expected to report $20.2 billion in revenue in 2019, according to analysts surveyed by Refinitiv.

Netflix expects its cash burn will peak in 2019, and then improve thereafter. While the company will continue to increase its spend, it is forecasting that its subscriber growth and previous price increases will lessen its negative cash flow.

Part of what Netflix is spending on is its own original content, with the idea these shows would help drive subscriber growth. But it’s difficult to say what drives members to sign up and stick around. The company doesn’t often release viewership data for its shows or movies and, since Netflix releases so many new programs and shows each month, it’s difficult to connect a spike in members to one individual program.

While domestic memberships have grown to around 60 million in 2018, up from 21.67 million in 2011, growth in this segment has slowed over the last year.

Internationally, Netflix has grown its subscriptions to nearly 81 million, up from just 1.86 million in 2011. Since 2015, the company has seen double digit growth in this area. Altogether, the company has just under 150 million subscribers.

Also, of the top 20 most watched shows on Netflix, six are “originals,” but only one of those are actually owned by the company, according to data from Nielsen and Pachter.

In fact, since mid-2014, Netflix has been cash flow negative, which means more money is flowing out of its business than it is taking in.

Netflix’s massive content investments come as the company’s rivals, Disney, WarnerMedia and NBCUniversal, get ready to launch their own streaming platforms and pull some, if not all, of their content from Netflix.

A lesson from ‘The Office’

Only last week, NBC-parent company Comcast outbid Netflix for the rights to “The Office.” It is currently the most watched show on Netflix and will find a home on NBC’s forthcoming streaming service for at least five years starting in 2021.

Even as what happened with “The Office” drives home the looming threat Netflix faces, investors have given Netflix a rich valuation. Perhaps, some have an expectation it will hold its own against its rivals, fix its cash flow issues and come out on top. In the past, Netflix has been an adaptable company and been willing to disrupt itself when certain aspects of its business are not thriving. Just look at how the company has handled its DVD rental business.

“We see that with Tesla, too,” Trainer said. “They trade untethered to fundamentals. That’s just a game of musical chairs. At some point, the music stops.”

Currently, 73% of analysts consider Netflix a “buy” and consensus puts the company’s price target at $410.99.

But Wedbush’s Pachter has “underperform” rating on the stock and a price target of $183, saying it needs to generate more cash than it spends.

Netflix has been spending nearly twice as much as it has earned over the last few years in an effort to differentiate itself from other streaming services.

“I have a hard time seeing how Netflix is going to be trading much above 50 bucks over the next couple years,” Trainer said.