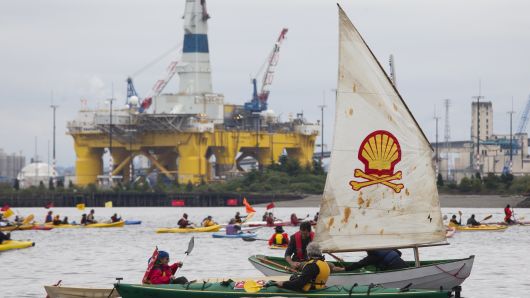 ShellNo flotilla participants float near the Polar Pioneer oil drilling rig during demonstrations against Royal Dutch Shell on May 16, 2015 in Seattle, Washington.

An activist investor group that has filed resolutions for three years to pressure Royal Dutch Shell to act on climate change said it will withdraw from this year’s filing.

Follow This, which has also invested in BP, ExxonMobil, Chevron and Equinor, made the decision to acknowledge that Shell has made progress by setting its first short-term carbon dioxide target last month.

The resolution, which was opposed by Shell’s board, called on the company to set and publish targets aligned with the 2015 Paris Climate Agreement guidelines to limit global warming to below 2 degrees Celsius by the end of the century.

Shell on Monday announced plans to invest $300 million over the next three years in reforestation projects. And in April, it became the first major oil company to leave U.S. refining lobby American Fuel & Petrochemical Manufacturers over clashes on climate policies, citing its support for the Paris climate agreement goals.

Oil companies have come under mounting pressure from activist shareholder communities who urge them take action over climate and pollution and acknowledge risks to their bottom lines. Last year, Shell caved in to investor pressure over climate change and rolled out carbon emissions targets linked to executive pay.

However, other investor efforts have failed. Last week, the Securities and Exchange Commission threw out a shareholder proposal that called for Exxon Mobil to set targets to reduce its greenhouse gas emissions.

Mark van Baal, founder of Follow This, said Shell still did not align with the Paris climate goals, but it’s made progress. After discussions with six major Dutch investor groups, Follow This withdrew from the resolution and will focus on other companies’ environmental goals.

“We have therefore decided to give Shell time to bring that climate ambition into line with the Paris Climate Agreement,” he said in a statement.

In the past, Shell’s board has consistently opposed the Follow This resolutions. Similar resolutions from the group in 2017 and 2018 were only met with 6 percent support of Shell shareholders.

Climate change will crush real estate values for unprepared investors: Report
Teen workers are heading back to restaurants, but the scramble continues
To Top
error: Content is protected !!