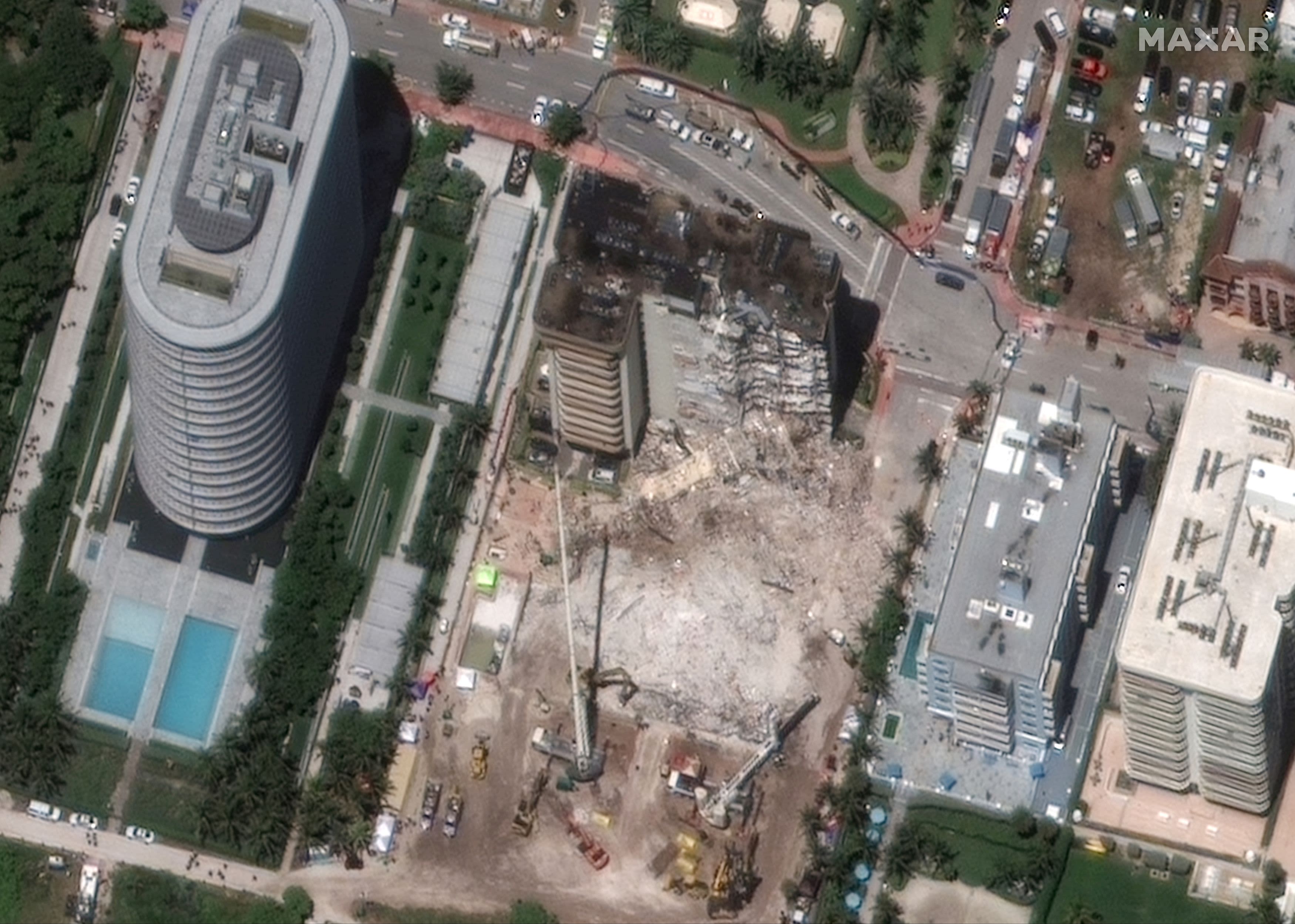 A satellite view shows the collapsed Champlain Towers condo building, in Surfside near Miami Beach, Florida, U.S., July 3, 2021.MAXAR TECHNOLOGIES | via REUTERSSearch-and-rescue operations at the partially collapsed condominium tower in Surfside, Florida came to a temporary halt Saturday, as authorities move to raze the rest of the building in a controlled demolition before the unstable structure is threatened by winds from Tropical Storm Elsa.During a press briefing, Miami-Dade Mayor Daniella Levine Cava said operations were paused temporarily at 4:00 p.m. ET Saturday due to preparations for the demolition, which includes drilling into unstable columns. The search can restart once the remaining part of the building is demolished. “We’re proceeding as quickly as we possibly can,” Levine Cava said Saturday evening.”It is all of our fervent desire that this can be done safely before the storm so that we can direct the demolition,” the mayor said earlier Saturday. “This demolition would be one that would protect and preserve evidence and allow maximum search-and-rescue activity to continue.”The death toll from the fallen building rose to 24 as of Saturday, and 121 people are still missing. No one has been rescued since the first few hours after Champlain Towers South, a 12-story condominium built in 1981, partially collapsed on June 24.Florida Gov. Ron DeSantis said the building can be brought down within 36 hours once the final plan is in place, while Surfside Mayor Charles Burkett said the demolition could occur as early as Sunday.”The fear was that the hurricane might take the building down for us and take it down in the wrong direction on top of the pile where we have victims,” Burkett said, referring to Elsa which was downgraded to a tropical storm Saturday.Levine Cava signed a local state of emergency for Elsa on Saturday morning. “Out of an abundance of caution, we’re ensuring we’re mobilizing everything we need in the county to prepare for any possible impacts,” she said at the briefing.The long-term forecast track shows Elsa heading toward Florida as a tropical storm by Tuesday morning, but some models would carry it into the Gulf or up the Atlantic Coast.Search and rescue personnel work at the site of a collapsed Florida condominium complex in Surfside, Miami, U.S., in this handout image July 2, 2021.MIAMI DADE FIRE DEPARTMENT | via REUTERSThe accelerated plan comes a day after Levine Cava said the demolition might not occur for weeks as engineers studied and signed off on next steps. Officials have restricted access to parts of the building zone that threaten public health and safety.However, Levine Cava said a demolition expert came forward Friday evening with the experience to move more quickly than originally anticipated. Engineers and state, local and federal authorities reviewed the plan and agreed it was the best path forward, Levine Cava said.”This proposed demolition is a very narrow footprint so we’re not looking at major impacts to the area or additional evacuations,” Levine Cava said. “We are still in the due diligence process.”The decision to demolish the portion of the building that’s still standing comes after search-and-rescue operations were halted most of Thursday out of concern that the remaining structure could fall, endangering first responders searching the site.The cause of the building collapse is still unknown. An engineering firm reviewed the condo tower in 2018, nearly three years before the collapse, and issued a report which found failed waterproofing below the building’s pool was causing “major structural damage.””Failure to replace the waterproofing in the near future will cause the extent of the concrete deterioration to expand exponentially,” the report said.The National Institute of Standards and Technology has launched a full investigation into the collapse and will make recommendations about how to improve building safety.Levine Cava ordered a 30-day audit of buildings 40 years or older in Miami-Dade County which are five stories or taller and have not completed the re-certification process. The county is reviewing 14 such buildings and 10 that recently began recertification.A condo building in North Miami Beach was closed and more than 300 residents evacuated Friday after an audit and building inspection report found unsafe structural and electrical conditions.

Just as the box office hit its stride, the delta variant appeared, with the power to halt progress
Richard Branson believes the space market has room for 20 companies launching tourists
To Top
error: Content is protected !!