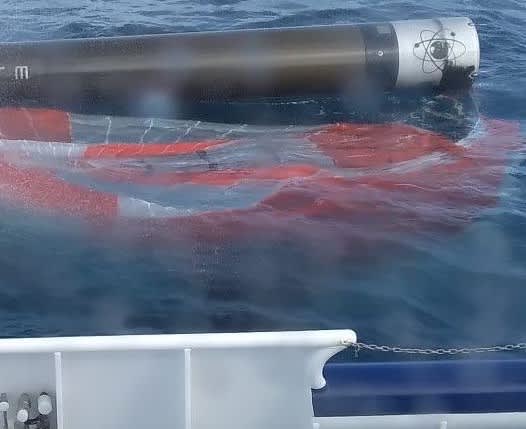 An Electron rocket gets ready to launch.Rocket LabRocket Lab, the leading company building and launching small rockets, on Thursday took what CEO Peter Beck described as a “huge milestone” in its work to reuse rockets.The company recovered the booster of its Electron rocket after it splashed down in the Pacific Ocean. The recovery came after Rocket Lab’s 16th launch to date, which carried 30 satellites to orbit for a variety of customers including TriSept, Swam Technologies and Unseenlabs.”Welcome back to Earth Electron!” Rocket Lab CEO Peter Beck said in a tweet, with an image showing the booster floating in the ocean next to one of the company’s ships.Beck’s company, much like Elon Musk’s SpaceX, wants to recover the boosters so it can launch more often – while simultaneously decreasing the material cost of each mission. But Rocket Lab’s approach to recovering its boosters is notably different than SpaceX’s, which uses the boosters’ engines to slow it down during reentry and add wide legs to land on large concrete pads.Rocket Lab, instead, is testing a technology Beck calls an “aero thermal decelerator” — essentially using the atmosphere to slow down the rocket. After reaching space, Rocket Lab’s onboard computer guides the booster through reentry. Then a parachute deploys from the top of the booster to slow it down and, eventually, allow the company to pluck it from the sky with a helicopter.”This is the first time we’re actually going to do everything but catch it under a helicopter,” Beck told reporters before the launch.The recovery happened in the ocean about 400 kilometers off the coast of New Zealand. Rocket Lab, which has operations and facilities in the United States as well, launches from a private complex on New Zealand’s Mahia Peninsula. Rocket Lab will now transport the booster back to the company’s production facility, where its engineers will inspect the rocket and gather data to further the recovery program.Beck acknowledged before the launch that, even with a few tests conducted previously, “it’s way too early” for Rocket Lab to “understand what condition we’re going to get it back in.””The strongest driver [of the recovery program] is not having to rebuild rockets, so being able to increase production rate is really the key driver,” Beck said. “The ultimate goal here is to get it back in such a condition that we can put it back on the pad, gas it back up, charge the batteries and go. And if we can achieve that milestone then the economics certainly do change quite significantly.”The benefits and economics of reusing rockets remains a contentious issue in the space industry. SpaceX’s Musk recently blasted competitor United Launch Alliance as “a complete waste of taxpayer money” because its rockets are not reusable. SpaceX has steadily pushed the boundaries of reusing rockets, most notably by landing the booster – which makes up the largest and most expensive part.Subscribe to CNBC PRO for exclusive insights and analysis, and live business day programming from around the world.