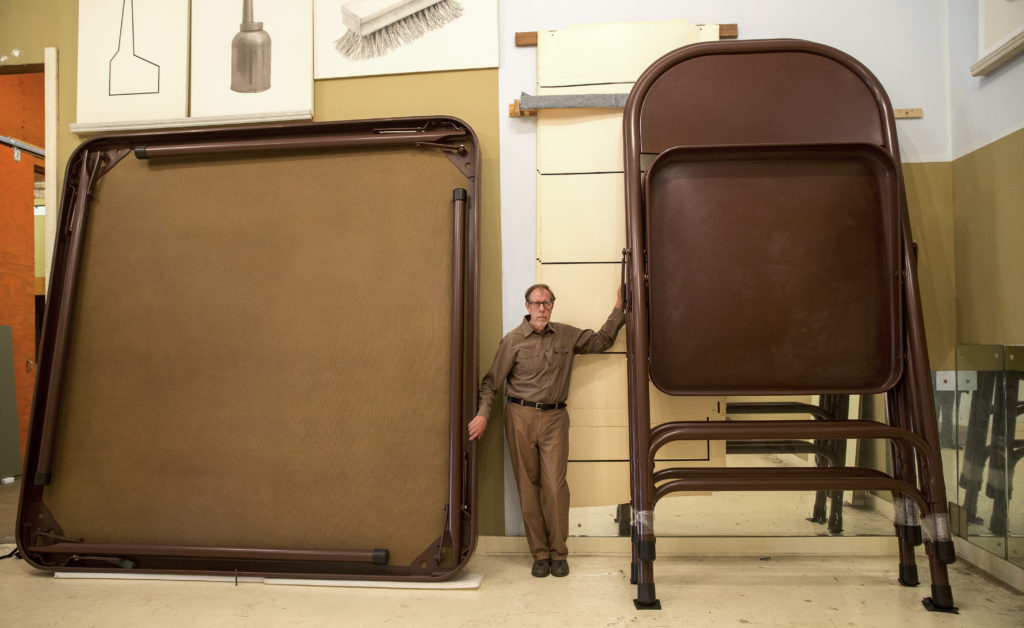 Robert Therrien, whose sculptures of objects bend viewers’ perception of scale, has died, according to Gagosian gallery, which represents him along with Sprüth Magers. He was 71.

Therrien was best-known for his oversized sculptures of chairs and tables that he produced at larger-than-life, room-filling scale. In doing so, everyday pieces of furniture seem unreal, and viewers become like children, crawling beneath kitchen tables. They have since become staples at art fairs and museums across the world.

In a statement, Gagosian described Therrien’s studio as “a fabled fixture in downtown Los Angeles [that] straddled the line between fantasy and reality, like much of his work. Throughout his career, Bob expressed his singular and enigmatic genius through an impeccable attention to detail, a transformative imagination with regard to scale, and an ability to translate the oft-overlooked into his own vision of beauty.”

There was often a humorous element to Therrien’s work. For a 2000–07 installation, titled RED ROOM, he created a gallery filled with 888 red objects—suitcases, shoes, articles of clothing, cleaning-product bottles, and much more. While most of the items within this cluttered space were exhibited in their original form, a few had been painted red, as if to fit with the unusual logic of creating a space dictated, seemingly at random, by one hue.

The artist frequently did not give interviews about his work. He was keen to let these sculptures speak for themselves, and as such his practice was imbued with a sense of mystery. RED ROOM was but one example involving a collection of things grouped together for reasons that were not disclosed to the viewer and known only to the artist.

Robert Therrien was born in Chicago in 1947. He began studying at the California College of Arts and Crafts in Oakland, and then transferred to the Brooks Institute in Santa Barbara, where he received a degree in photography. He went on to receive an M.F.A. from the University of South California in L.A., where he remained for the majority of his career.

His work has been shown at a variety of institutions, including Tate Modern in London, the Scottish National Gallery of Modern Art in Edinburgh, and the Albright-Knox Art Gallery in Buffalo, New York. A survey of his work opened at the Los Angeles County Museum of Art in 2000 and also traveled to SITE Santa Fe in New Mexico, the Contemporary Art Museum Houston in Texas, and the Museo de Arte Contemporáneo de Monterrey in Texas.

Therrien’s aim was to shift people’s perspectives about their relation to space that they inhabit, and many of his works resemble enlarged or altered versions of objects that do not, at first glance, reveal their original source material. A 2017 show at Gagosian in New York was emblematic of his practice where he exhibited a sloping obelisk with a circular form at its top. Only by looking at the press materials would one know that it was based on an aerial view of a flagpole.

“There is a diversity in the way people see,” he said in a statement accompanying a show held at Gagosian’s San Francisco gallery earlier this year. “Some always see flat. Others always in perspective.”