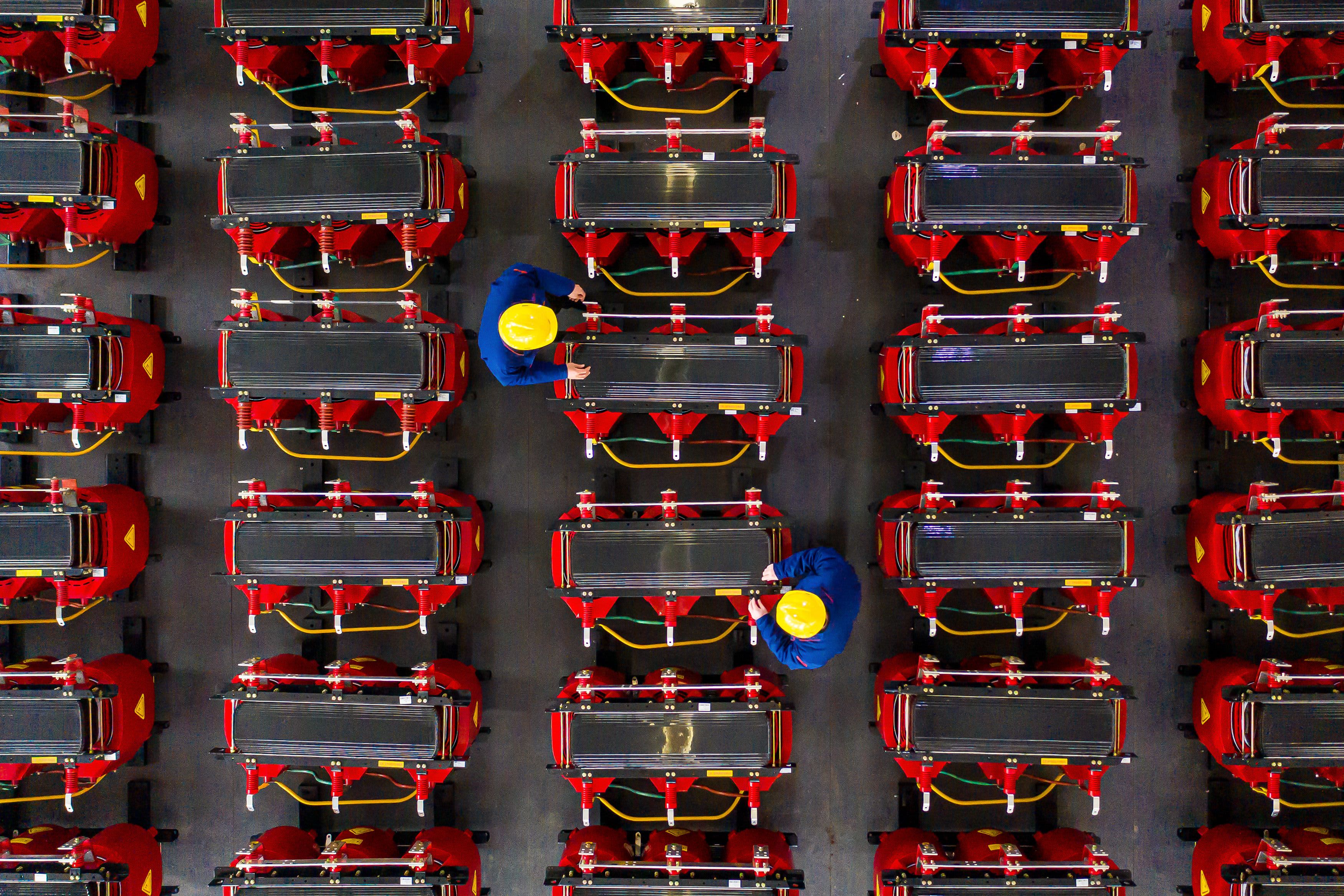 Employees working on a dry-type transformer production line at an electrical production factory in Haian, in eastern China’s Jiangsu province on Jan. 4, 2021.Stringer | AFP | Getty ImagesBEIJING — China reported Monday that its economy grew 2.3% last year as the world struggled to contain the coronavirus pandemic.Gross domestic product rose by 6.5% in the fourth quarter from a year ago, official data from the National Bureau of Statistics showed. Those numbers beat analysts’ expectations.However, Chinese consumers remained reluctant to spend, as retail sales contracted 3.9% for the year. Retail sales for the fourth quarter rose 4.6% from a year ago.Online sales of consumer goods rose at a relatively rapid pace of 14.8% last year, the statistics bureau said, but the proportion of overall retail sales held fairly steady at around one-fourth.Economists expected China to have been the only major economy to grow last year, and predicted GDP in 2020 expanded by just over 2%. Those polled by Reuters expected the economy to grow 6.1% in the fourth quarter, faster than the 4.9% pace of the prior quarter.Chinese authorities have been trying to increase the economy’s reliance on domestic demand, rather than more traditional growth drivers such as investment.For 2020, consumption accounted for 54.3% of GDP, Ning Jizhe, commissioner of the National Bureau of Statistics, told reporters Friday. That’s lower than 57.8% of GDP that was initially reported for 2019.Bruce Pang, head of macro and strategy research at China Renaissance, expects retail sales will pick up in 2021, rising more than 10% from the prior year’s subdued levels, partly as consumers spend excess savings from 2020.Impact of Covid-19Covid-19 first emerged in the Chinese city of Wuhan in late 2019. In an effort to control the virus, Chinese authorities shut down more than half the country, and the economy contracted by 6.8% in the first three months of 2020.There’s been a resurgence of the coronavirus in parts of China this year, with the province of Hebei reporting a rise in Covid-19 cases since the start of the year.Ning said the re-emergence of the virus has increased uncertainty, and attributed the drop in retail sales to the coronavirus. But he portrayed the latest virus cases as controllable given China’s experience last year.While some economic indicators exceeded expectations last year, others were not ideal, Ning said, noting some of China’s problems can’t be resolved in the short term.China’s economy returned to growth in the second quarter. In late December, the National Bureau of Statistics lowered China’s official growth rate for 2019 to 6.0%, versus the previously reported 6.1%. The cut primarily occurred in manufacturing, as factories dealt with new U.S. tariffs on billions of dollars’ worth of Chinese goods.

Democratic governors accuse Trump administration of misleading them about vaccine stockpile
Natural gas prices in Asia may have peaked after recent highs: Eurasia
To Top
error: Content is protected !!