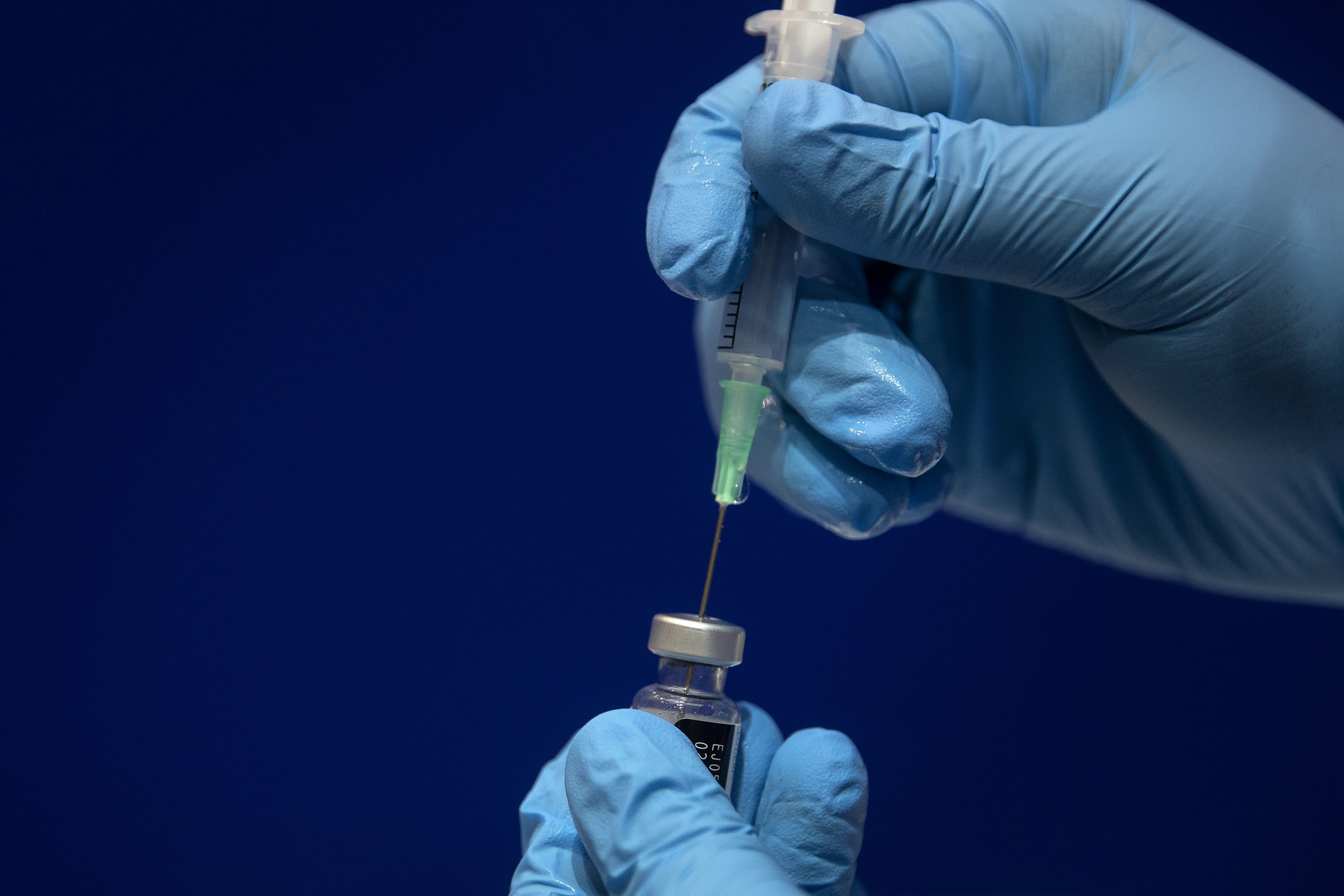 1.8ml of Sodium chloride is added to a phial of the Pfizer/BioNTech COVID-19 vaccine concentrate ready for administration at Guy’s Hospital at the start of the largest ever immunization progran in the U.K.’s history on December 8, 2020 in London, United Kingdom.Victoria Jones – Pool | Getty ImagesLONDON — New data from England has revealed how effective coronavirus vaccines are at fighting the disease, even after just one dose.In December, the vaccine developed by Pfizer and BioNTech became the first shot to be approved and rolled out in the U.K.Elderly people, health workers and care home staff were the first in line to be immunized. That was soon followed by the shot developed by British firm AstraZeneca and the University of Oxford, another vaccine that requires two doses.Fighting infectionFigures in a research paper from Public Health England, released Monday but awaiting peer-review, showed that the Pfizer and Oxford-AstraZeneca vaccines are highly effective in reducing Covid infections among people age 70 years and over.Since the study started in January, protection against symptomatic Covid, four weeks after the first dose, ranged between 57% and 61% for the Pfizer vaccine and between 60% and 73% for the AstraZeneca inoculation.Vaccine effectiveness in the data for Public Health England is calculated using a mathematical statistic called an odds ratio, click here for the full data and methodology.Curbing hospitalizations and deathsThe research, which had data from over 7.5 million people, also gave evidence that a single dose provides additional protection against hospitalization and death.It said that coronavirus cases among vaccinated individuals had around half the risk of severe outcomes, compared with unvaccinated cases. It combined this with the estimates on their effectiveness against symptomatic disease, and predicted that a single dose of either vaccine is around 80% effective at preventing hospitalization in the elderly at around three to four weeks after the first dose.It also said it suggested that a single dose of the Pfizer vaccine is 85% effective at preventing death with Covid-19 for those over 80.British Health Secretary Matt Hancock called the findings “very strong.””They may also help to explain why the number of Covid admissions to intensive care units among people over 80 in the U.K. have dropped to single figures in the last couple of weeks,” he said.Policymakers in Britain feel vindicated after deciding to delay second doses to around three months, aiming to inoculate more people at a faster rate with a first dose. Experts in the U.S. have been more hesitant with the strategy, with White House Chief Medical Advisor Dr. Anthony Fauci saying Monday that “there’s risks on either side.”As of Sunday, 20,275,451 Britons have received their first dose of a vaccine, and 815,816 have received both doses, government data says.The U.K.’s vaccination program has been widely hailed as a triumph amidst tragedy; the U.K. has seen the fifth-highest number of infections worldwide, after the U.S., India, Brazil and Russia, with nearly 4.2 million infections and over 123,000 deaths, the fifth-highest death toll in the world, according to Johns Hopkins University.—CNBC’s Bryn Bache contributed to this article.

Chinese Tesla rival Nio says global chip shortage will hit its electric car production
A guide on how not to embarrass yourself while traveling in Japan
To Top
error: Content is protected !!