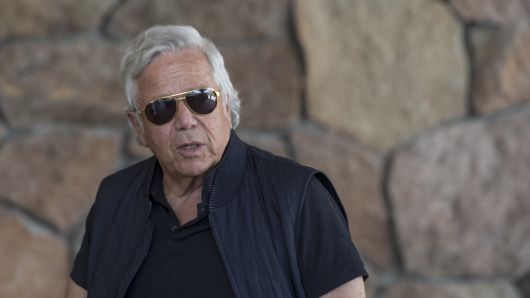 The Palm Beach County State’s Attorney’s Office — which has charged the 77-year-old billionaire Kraft with two counts of soliciting prostitution — has said in a court filing that it must release the videos, and others showing other men visting the same spa, to the public because of Florida’s open-records laws.

Kraft’s lawyers have asked a judge to bar the release of the video of the Patriots owner, which they have described as “pornography.”

The Globe reported that prosecutors have said they cannot wait for a judge’s ruling about the release of the videos in connection with a related criminal case against Lei Wang, the alleged manager of the Orchids of Asia Day Spa in Jupiter, Fla.

Kraft’s lawyers filed an emergency motion Wednesday to intervene in Wang’s case so thet can “oppose the State’s intended disclosure” the videos, according to documents seen by CNBC.

Another emergency motion was filed by a man who claims he obtained a lawful massage at the spa, and also asked a judge Wednesday to bar prosecutors from releasing a video that showed him receiving that treatment.

And lawyers for Wang herself filed a new motion requesting the videos be kept from the public for now.

Spokesmen for Kraft and for the prosecutor’s office had no immediate comment when contacted by CNBC.

Hedge funds had their best first quarter in 13 years
Amazon plans to close its marketplace for Chinese consumers
To Top
error: Content is protected !!