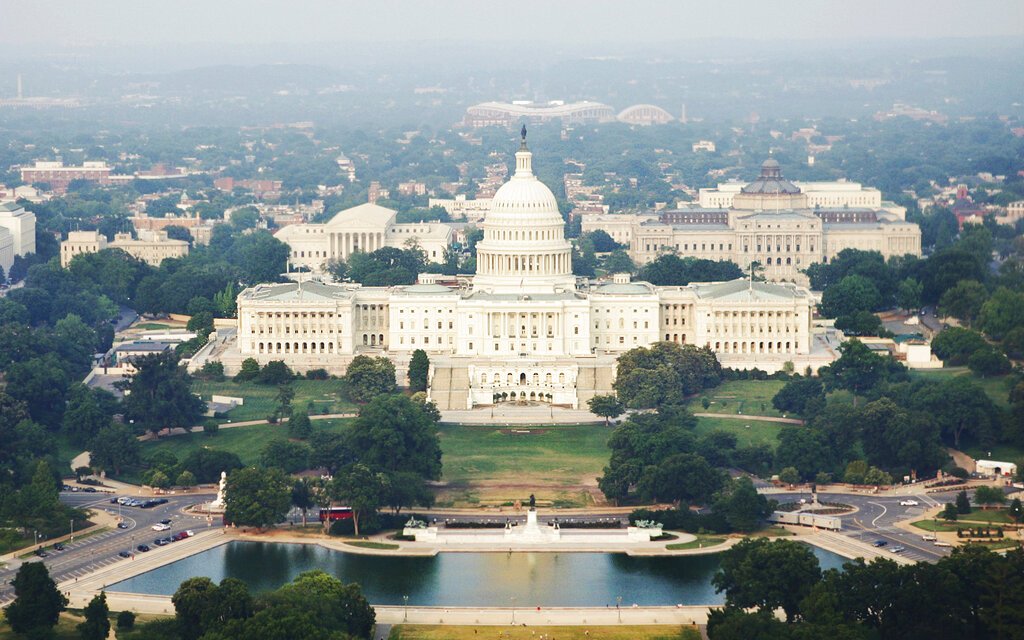 To receive Morning Links in your inbox every weekday, sign up for our Breakfast with ARTnews newsletter.
The Headlines
PRESIDENT BIDEN HAS REVOKED AN EXECUTIVE ORDER signed by President Trump that called on the federal government to create buildings in classical architectural styles, NPR’s Elizabeth Blair reports. Trump signed the order, “Promoting Beautiful Federal Civic Architecture,” last December (apparently taking a break from advancing election conspiracy theories). Blair notes that Biden’s order “may put his administration at odds with the U.S. Commission of Fine Arts,” which advises lawmakers on “design and aesthetics.” Trump appointed four tradition-minded members to the seven-member CFA late last year, as Kriston Capps of CityLab wrote at the time. Members serve four-year terms, and the first opening will arrive only in 2022. Its chairman, Justin Shubow, told NPR that “our federal architecture has been dismal for decades, and has been designed in modernist styles that do not represent what ordinary Americans actually want.”

GOOD NEWS FOR CHARM CITY MUSEUM WORKERS: The Baltimore Museum of Art and the nearby Walters Art Museum said they are raising the pay of their lowest-paid full-time employees to $15 an hour, the Baltimore Sun reports. They have lined up donations to make the hikes possible. Under Maryland law, firms with more than 15 employees are required to have a $15/hour wage by 2025. Said BMA director Christopher Bedford , ”The time to achieve a diverse and equitable environment was years and years and years ago.” The wage boost had been one component of Bedford’s controversial plan to sell three major works from its collection to fund various initiatives, which the museum nixed last October amid criticism.
The Digest
Major staff cuts may be coming at the Victoria and Albert Museum in London. [The Guardian]
Museums in Switzerland will be allowed to reopen on March 1. That’s Monday! [The Art Newspaper]
From February to December last year, California saw a 13 percent drop in employment in the “creative economy workforce,” according to a study by Otis College. In Los Angeles County, the figure was a staggering 24 percent. [The New York Times]
Jon M. Chu, who directed the 2018 hit Crazy Rich Asians, is set to helm The Great Chinese Art Heist, inspired by an eponymous GQ article that looks at the recent theft of Chinese artworks from international museums. [Deadline]

South Korean feminist groups have criticized a video by Jung Yoon-suk that includes footage of female sex dolls, saying that it objectifies women. It’s currently being shown at the National Museum of Modern and Contemporary Art in Seoul, which is standing behind the work. [The Korea Times]
A newly created James Turrell Skyspace will go on view at the Massachusetts Museum of Contemporary Art this spring. Housed in a former water tank, the work was originally dreamed up by the artist in 1987. [The Art Newspaper]
Critic Jason Farago took a first look at the Frick Collection’s installation of its collection at the former Met Breuer, aka the former Whitney Museum, on the Upper East Side of Manhattan. The Frick Madison is “an unexpectedly audacious transmutation of the city’s plushest museum,” he writes. [The New York Times]
Artist and poet Precious Okoyomon has won the 2021 Frieze Artist Award, which will provide $30,000 for Okoyomon to create a work for the New York edition of Frieze’s art fair. That event is slated to take place in May at the Shed. [Frieze]
An exhibition at the Museum of Fine Arts in Houston brings together the work of Vincent van Gogh and David Hockney. They are united by “an absolutely ecstatic joy of nature,” Ann Dumas, the MFA’s consulting curator of European art, said. [Architectural Digest]
Sculptor Lynda Benglis, who’s famed for her poured-latex sculptures, has joined the roster of Mendes Wood DM, which has galleries in São Paulo, New York, and Brussels. [Ocula]
The Kicker
WEALTHY ART COLLECTORS ARE INCREASINGLY BORROWING AGAINST their art holdings, Robert Frank reports, with Bank of America saying that its art-loan business climbed 30 percent last year. “A lot of our clients are entrepreneurs, and they use leverage across their businesses and personally,” Freya Stewart, CEO of art finance at the Fine Art Group advisory firm said. “They have a lot of valuable capital tied up in their art collections and they want to release that capital for other uses.” [CNBC]
Thank you for reading. We’ll see you on Monday.