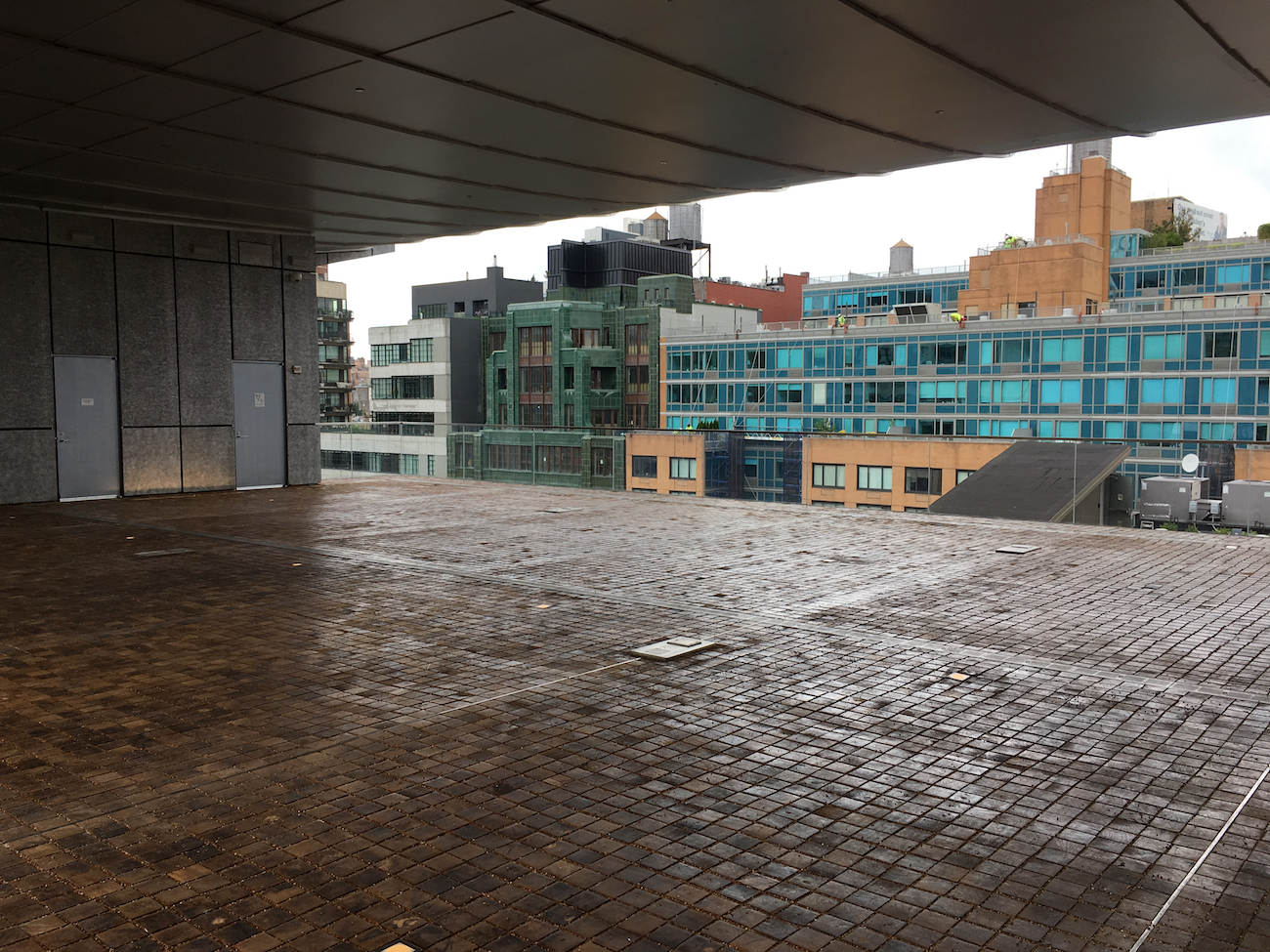 An outdoor sculpture gallery (not yet outfitted with sculptures) on the sixth floor.ANDY BATTAGLIA/ARTNEWS
Pace Gallery threw open the doors to its new eight-story headquarters in New York for a press preview on Tuesday, offering a sneak peak at exhibitions already hung while awaiting a few finishing touches before a full public opening to gallery-goers in Chelsea on Saturday.
“As you can see, we are done with the building—kind of,” Marc Glimcher, Pace’s president and CEO, said during remarks held in a dramatic seventh-floor room with views of old-fashioned water towers and Hudson Yards rising up behind him. The seventh floor will be home to performance programming for Pace Live, a new initiative whose schedule for the season was revealed at the preview, and the levels below—each with its own character and sense of size and scale—were filled with new shows of work by Alexander Calder, Yto Barrada, David Hockney, Loie Hollowell, Peter Hujar, and Fred Wilson (whose suspended exhibition “Chandeliers” lends the seventh-floor a looming sense of expectancy).ARTnews learned that a shaman had blessed the space in a ritual for employees on Monday, with a cacao ceremony that involved drinking bowls of bitter hot chocolate with special energy-giving properties. When cornered for details, Glimcher said, “Have you ever had ceremonial cacao? I was, like, on—you feel it! Everybody said blessings to the building and to each other.” (And the shamanic activities remain ongoing: “She’s still working—she’s in the boiler room right now,” Glimcher added.)During his prepared remarks, Glimcher noted that 21 babies had been born into the Pace family during the years that the new building had been in its planning stages. And now that it’s opening, “We want people to come and take their time” in what has been imagined aspirationaly as “a communal space for thinking, transcendence, and contemplation.”News was announced, including the appointments of Oliver Shultz as Pace’s new curatorial director and Michaëla Mohrmann as associate curatorial director. Schultz is joining the gallery from MoMA PS1, where he has worked in the curatorial department (including on the forthcoming show “Theater of Operations: The Gulf Wars 1991–2011,” which is being organized by Peter Eleey and Ruba Katrib). Mohrmann has been an Andrew W. Mellon Museum Research Consortium Fellow at MoMA, with a focus on Latin American art.Both will join a curatorial team overseen by Andria Hickey, who last year left the Museum of Contemporary Art Cleveland to become Pace’s senior director and curator—and who spoke at the preview of an expanding curatorial purview for exhibitions as well as programming projects like Pace Live. The performance program for the fall—to be helmed by Pace Live curatorial director Mark Beasley, recently installed after a stint at the Hirshhorn Museum & Sculpture Garden in Washington, D.C.—will include a film night with a traditional Moroccan dinner conceived by gallery artist Yto Barrada as well as two projects including outside presenters: Performa, which has commissioned a new installation and performance by Torkwase Dyson, and the roaming curatorial platform Blank Forms, which will present concerts of music by avant-garde French composer Eliane Radigue. (Live events at Pace will be free except when proceeds from ticket-sales will be donated to non-profit organizations presenting them; the Blank Forms concerts, for instance, will be ticketed for $25.)At the end of the official remarks, Arne Glimcher, who founded Pace and guided it for decades before giving over control to his son Marc, spoke of having borrowed $2,800 from his brother Herb to open the first location in Boston in 1962. It was a different situation then but similar in certain ways, he said, while dedicating the new flagship to “the artists who have shown at Pace—this is their gallery.”

A sign in deep, dark wood greeting gallery-goers at the entrance.ANDY BATTAGLIA/ARTNEWS

Pace’s new library, to be open by appointment (with a study room too).ANDY BATTAGLIA/ARTNEWS

Kota Reliquary Figure, Gabon, Attributed to Semangoy in a display of African & Oceanic art on the third floor.ANDY BATTAGLIA/ARTNEWS

An outdoor sculpture gallery (not yet outfitted with sculptures) on the sixth floor.ANDY BATTAGLIA/ARTNEWS

An outdoor sculpture gallery (not yet outfitted with sculptures) on the sixth floor.ANDY BATTAGLIA/ARTNEWS

Helsinki Is Getting an Art Biennial -ARTnews