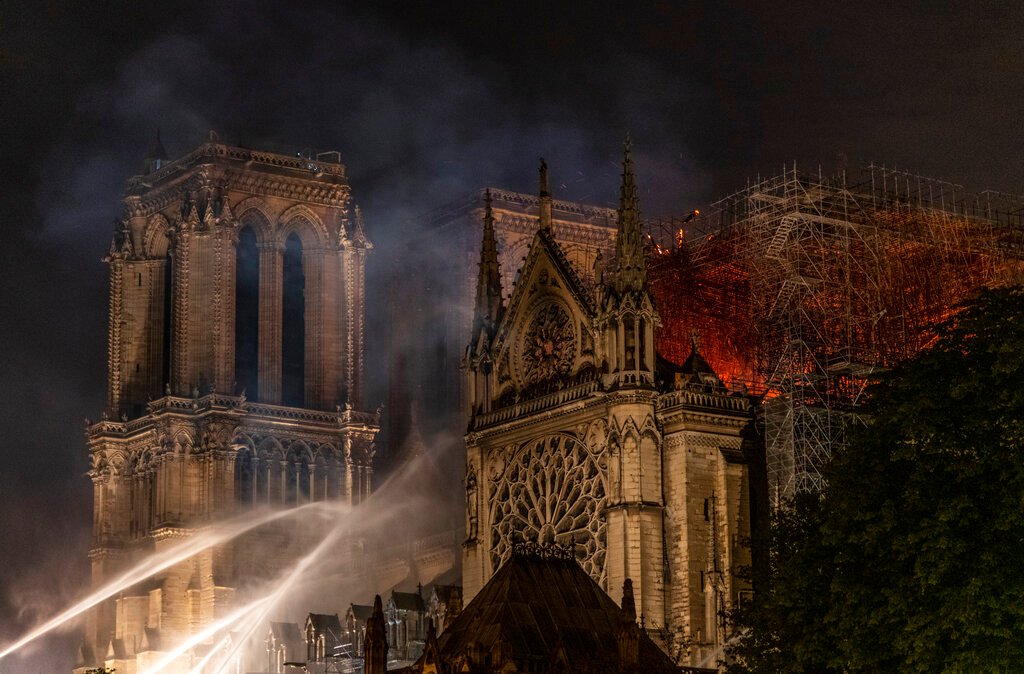 To receive Morning Links in your inbox every weekday, sign up for our Breakfast with ARTnews newsletter.
The Headlines
WHILE BILLIONAIRES AND COMPANIES RUSHED to donate money to rebuild Paris’s Notre-Dame cathedral after it burned in 2019, the Catholic diocese is still seeking more funding to restore and upgrade its interior, the AFP reports. The issue: a French law requires that cash raised through the public subscription can only go toward structural issues with the building, which is owned by the nation. So far, north of €800 million (about $970.3 million) has been raised, and the diocese is seeking €5 million to €6 million ($6.06 million–$7.28 million) for furniture, a lighting system, and other elements. Work on the building is scheduled to start later this year with the aim of having it completed for the 2024 Summer Olympics in the French capital.

AT THE NATIONAL PORTRAIT GALLERY in Washington, D.C., the portraits that Kehinde Wiley and Amy Sherald made of President Barack Obama and First Lady Michelle Obama, respectively, have drawn huge crowds. Now they are going on a national tour, which kicks off this week at the Art Institute of Chicago, the Washington Post reports. Over the coming 12 months they will also visit the Brooklyn Museum, the Los Angeles County Museum of Art, the High Museum of Art in Atlanta, and the Museum of Fine Arts in Houston. Each venue is planning its own exhibition. LACMA, for one, will include 150 other works from its collection, predominantly by Black artists. “It’s not just about Black portraits, but centering Black joy, Black abundance, Black nuance, Black family,” LACMA curator Christine Y. Kim told the Post.
The Digest
The Royal Collection in the United Kingdom has so far declined to comment about whether it will follow some museums in repatriating a Benin Bronze it has in its collection. The piece was given to the Queen as a gift in 1973 by Nigerian president Yakubu Gowon, who took it from the Nigerian National Museum in Lagos, reportedly to the horror of its director. [The Art Newspaper]
Libbie Mugrabi has asked a court to reconsider her divorce agreement with art collector David Mugrabi, alleging that her ex-husband damaged Warhol and Basquiat pieces that were to be given to her in the split. [Page Six]

Taiwanese musician, magician, pianist, rapper, and art collector (the list goes on) Jay Chou has collaborated with Sotheby’s to stage a show at K11 spaces in Hong Kong of works he has selected for the house’s “Contemporary Curated: Asia” sale. [Wallpaper]
Painter Jennifer Packer had a wide-ranging discussion with curator Hans Ulrich Obrist about her art—and art in general. “People think representation is more believable or real than abstraction,” she said. “But van Gogh’s paintings don’t look real. I’ve never seen a painting that looked real, but I’ve seen paintings that felt real.” [Cultured]
Reporter Sandra E. Garcia writes that “one of the more interesting collections of contemporary African-American art is housed inside a fairly humble Manhattan two-bedroom apartment on Madison Avenue.” It belongs to broadcaster and writer Alvin Hall, who has been collecting with a prescient eye since the 1980s. [T: The New York Times Style Magazine]
Museums have been dealing with pest issues as a result of extended closures during lockdown, and a mother-and-daughter team has created a card game to help educate staffers on how to win the battle. It is titled Save the Museum! [The Art Newspaper]
The Kicker
IT TOOK A GPS LOCATOR, A METAL DETECTOR, AND DIGGING EQUIPMENT, but after a Covid delay, repair work has finally been completed on Antony Gormley’s sculpture installation Another Place, which arrays 100 cast-iron nude men around Crosby Beach in England. The Guardian reports that some slipped into the mud when their concrete supports decayed, but they have been found and properly reinstalled, with sturdier pedestals. “I think they will still be around in 1,000 years and maybe longer,” Gormley said, and suggested that they will “turn slowly turn into Giacomettis” as water erodes them. [The Guardian]
Thank you for reading. We’ll see you tomorrow.