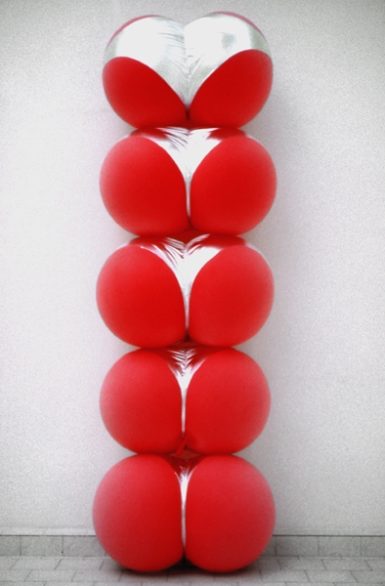 Last night at the 2019 MTV Video Music Awards, pop sensation Lizzo took to the stage to perform two rousing tracks. The Detroit-born musician danced in front of a giant, inflatable rear end in scant underwear, as she sang songs about self-love and sex positivity.

Some art types on social media soon began wondering if the backdrop for her performance was inspired by—or, in fact, was—a sculpture by the New York–based artist Nancy Davidson.

Davidson was among those recognizing a resemblance. “I know how designers are, they’re omnivorous with what they see,” the artist told ARTnews in a phone interview today. “I would just appreciate a shout-out, though.”

But Lizzo’s creative director, Quinn Wilson, who designed the set, told ARTnews she had actually not previously been familiar with Davidson’s work, but uses the same inflatable company as Davidson, Landmark Creations in Burnsville, Minnesota. “I’ve never seen her work before, until now, but it is brilliant now that I’m looking,” she said. “But no, I did not know of her work prior to this, and wouldn’t source her as inspiration.”

Davidson’s cheeky sculptures have been seen at institutions such as the Institute of Contemporary Art in Philadelphia, the Contemporary Arts Center in Cincinnati, and Robert Miller Gallery in New York.

On her Instagram, the artist posted a 1997 piece of stacked inflatable backsides in tapering metallic “underwear,” titled Buttress, that was reminiscent of the VMA backdrop. The piece had been exhibited at Shoshana Wayne gallery in Los Angeles in 1998 and Miller in 2001.

“I think Lizzo is great! I’m familiar with her music, and I love what she’s doing,” Davidson said. “I have a lot more work, though, and what if we could do something together?”