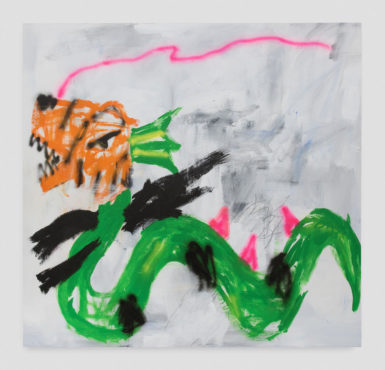 On July 20, Nava will open his first solo exhibition with the gallery. Nava’s expressionistic paintings often depict animals and have have been featured in group shows at Night, most recently in the group exhibition “Paradise” last summer.

Upcoming programming with Ruais and Bing has not yet been finalized, though both have had shows with the gallery prior to their representation.

Ruais, who is from Southern California and based in Brooklyn, had an untitled solo exhibition at Night back in 2018. She’s known for meaty, clay-based abstract work in which the touch of her hand is often dramatically visible, and has been the recipient of a Pollock-Krasner Foundation grant and a Socrates Sculpture Park Emerging Artist Fellowship.

Bing, who’s from Shandong, China, and based in Beijing, has had two solo exhibitions with Night Gallery, most recently also in 2018. She’s influenced by the American modernists, and paints brushy, variously textured abstractions.

Brian Faucette, Night Gallery’s senior director, told ARTnews over email, “The gallery is thrilled to continue to support emerging artists. As we head into our 10th season in 2020, we feel that these three artists, each with their own distinctive practices, will reflect that mission.”