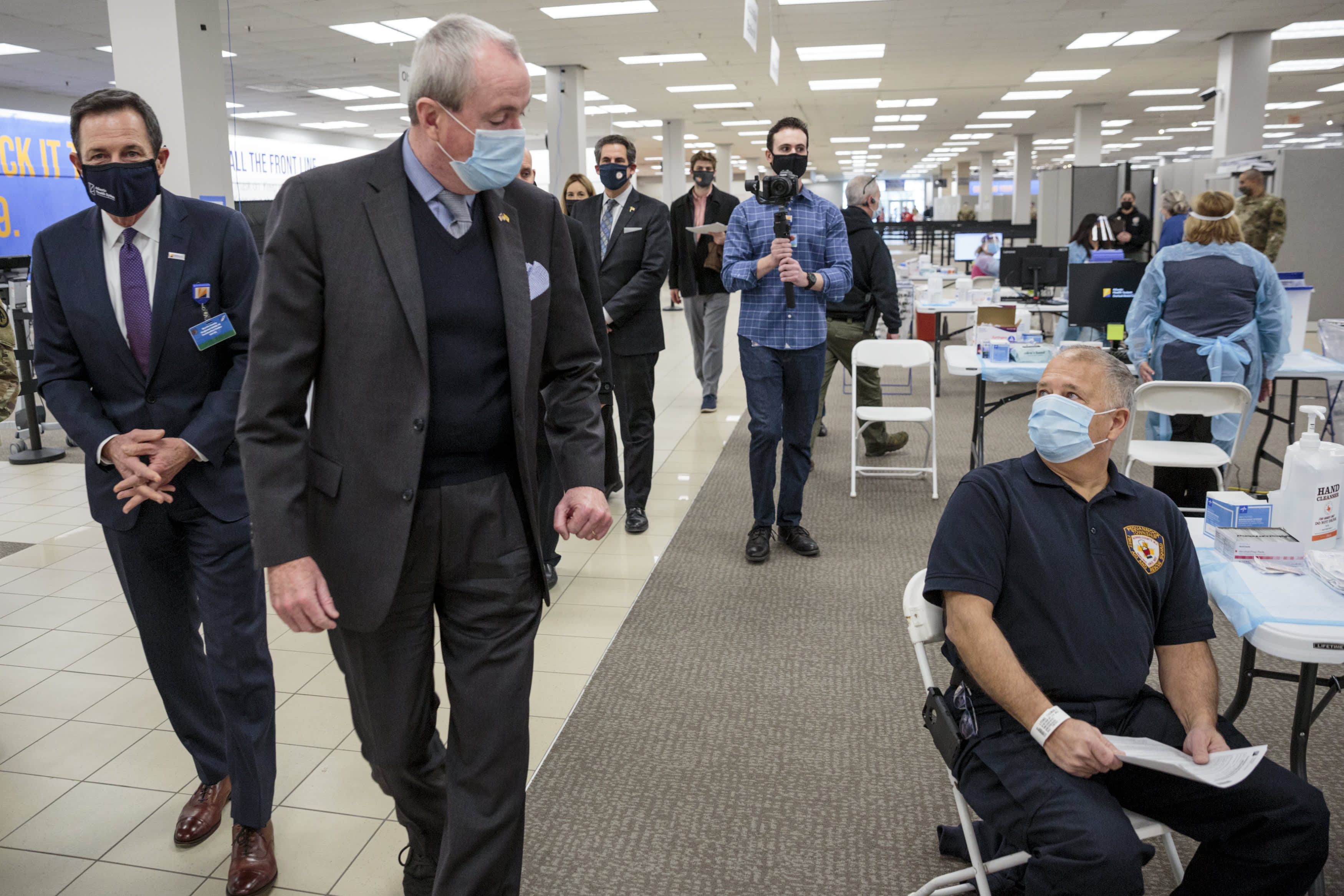 Phil Murphy, New Jersey’s governor, second left, greets police sergeant during a tour of the Morris County Covid-19 vaccination site at the Townsquare Mall in Rockaway, New Jersey, U.S., on Friday, Jan. 8, 2021.Sarah Blesener | Bloomberg | Getty ImagesNew Jersey Gov. Phil Murphy said Friday the state is keeping its indoor mask mandate in place, despite newly relaxed guidelines from the Centers for Disease Control and Prevention.The CDC updated its policy Thursday, saying it is safe for fully vaccinated Americans to ditch their masks in most settings, whether they are outside or indoors.While fully vaccinated New Jersey residents can take their masks off outdoors, Murphy said those who aren’t vaccinated should continue to wear masks outdoors when in “close proximity” to others.The outbreak in New Jersey, which peaked in January at a seven-day average of more than 6,000 new cases a day, has since subsided to a daily average of around 500 cases over the past week.The announcement comes as other states decide whether to incorporate new CDC guidelines into state policy.Hawaii Gov. David Ige said his state’s mask mandate will remain in effect for everyone, vaccinated or unvaccinated, despite the CDC’s new recommendations. Hawaii recorded its highest seven day average of about 250 cases a day in late August; it’s currently seeing less than 90 new cases a day, on average.Texas lifted its mask mandate in March, preceding the CDC’s announcement by two months. Texas recorded a peak seven-day average of more than 23,000 cases in January, just two months before it lifted its mask mandate. It’s recorded an average of just over 2,200 new cases a day over the last week.Texas’ Department of State Health Services told CNBC that the agency agrees with the new CDC guidelines and is in the process of updating its recommendations.New York Gov. Andrew Cuomo said the state is reviewing its mask guidance with experts from neighboring states after the new CDC recommendations. The state of New York reported a peak seven day average of almost 17,000 cases in January; it’s now recording just over 2,000 cases a day.In New York City, Mayor Bill de Blasio praised the move as a “monumental day in the fight against Covid-19” and said the city is reviewing its own guidelines.