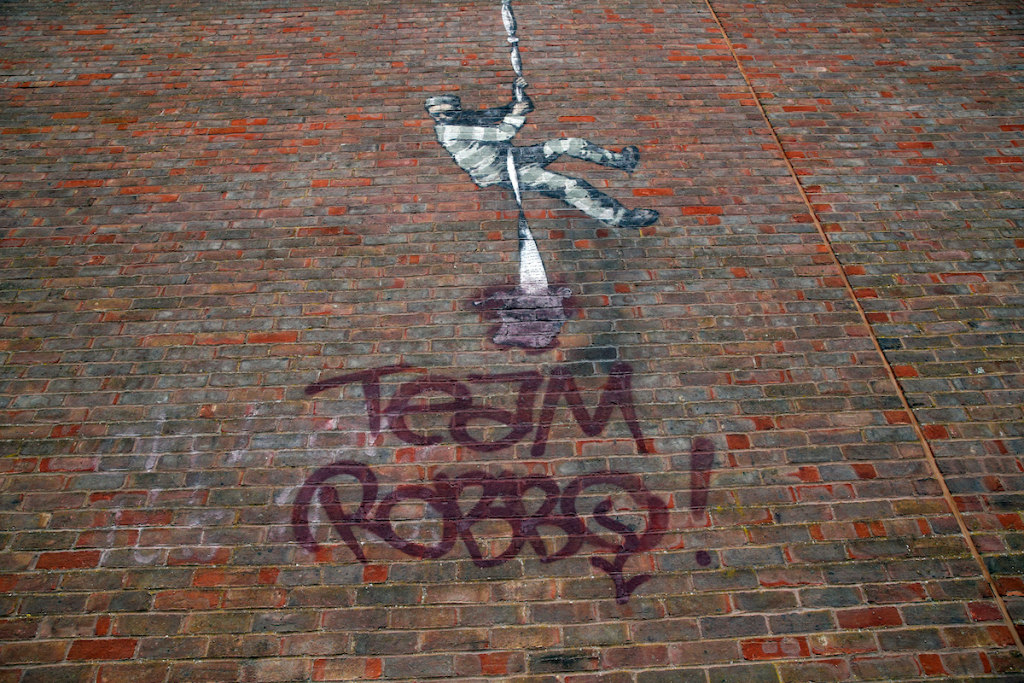 A recently created mural by Banksy has been tagged with a reference to a rival street artist. According to a report by the National, Banksy’s painting atop the wall of a former prison in Reading, England, which the artist made earlier this month, has been tagged with the words “Team Robbo” in an apparent nod to the late graffiti artist King Robbo.
Banksy’s mural depicts a prisoner scaling the wall using a sheet tied to a typewriter, which was covered up with red paint as part of the new tagging. Many believe that the work alludes to Oscar Wilde, who was incarcerated at Reading Prison in the 19th century.

The National reports that the Save Reading Gaol campaign, which aims to transform the former prison into an arts center, alerted the public to the “Team Robbo” tag via social media on Tuesday. The campaign’s account tweeted, in part, “Awful news to wake up to and to realise that the failure to protect something precious to the town has left it vulnerable to destruction…”
In another tweet, Save Reading Gaol called on the British Ministry of Justice to remove the new tag before it permanently damaged the original mural. “It would seem the @MoJGovUK has a crucial window of opportunity before the red paint which ruined the #Banksyartwork cures & becomes extremely hard to remove,” the account wrote.
Similar incidents involving Banksy’s work have occurred in recent months. In December, two Bansky murals in New Orleans were tagged with messages about King Robbo, with whom Banksy had feuded over a 2009 controversy involving a painted-over tag in London.