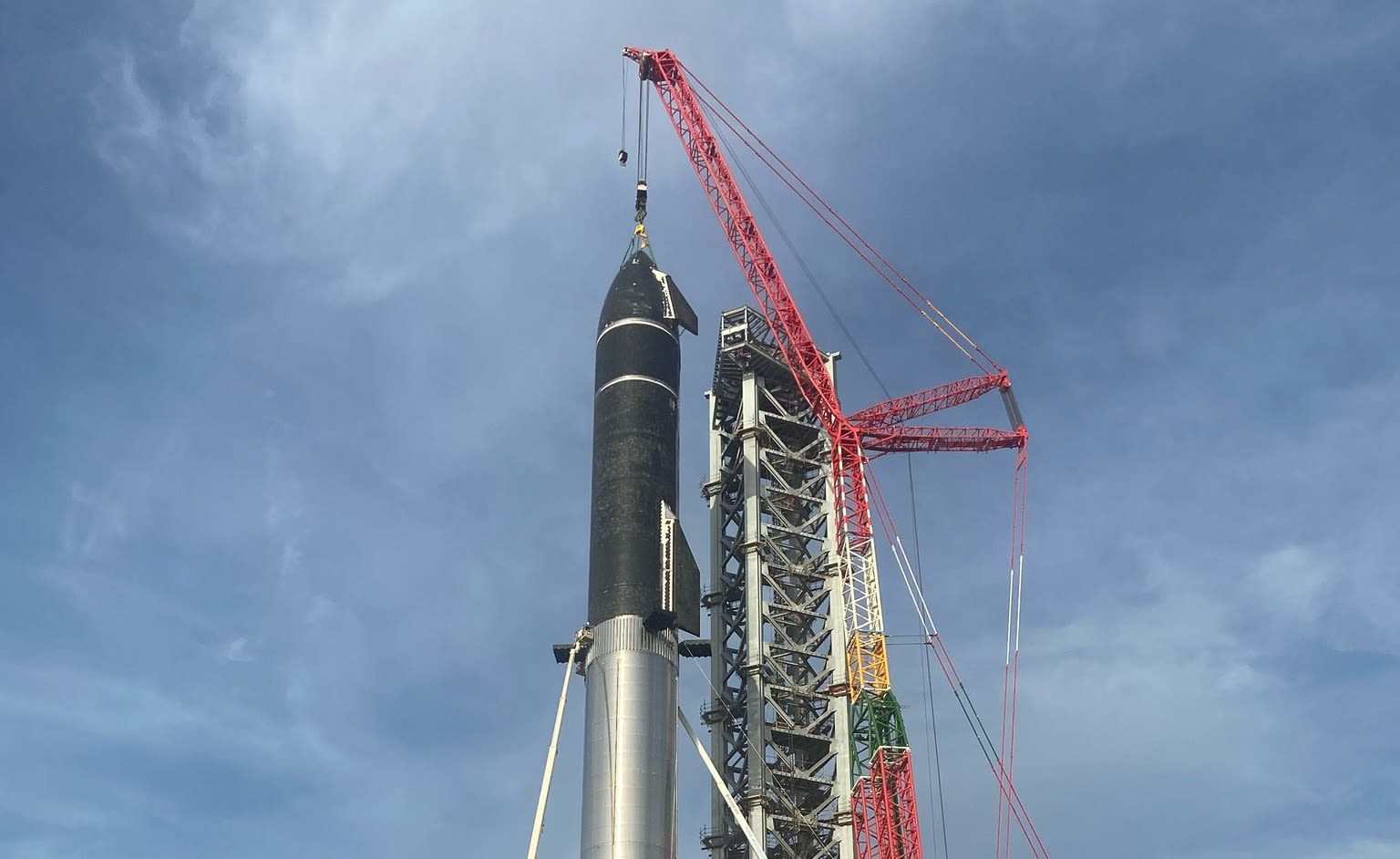 SpaceX stacks Starship prototype 20 on top of Super Heavy rocket Booster 4 on August 6, 2021.@elonmusk on TwitterElon Musk’s SpaceX stacked a Starship prototype rocket on top of a Super Heavy rocket booster for the first time Friday morning, giving a look at the scale of the combined nearly 400-foot-tall vehicle.Musk, asked by CNBC what he thought of witnessing the milestone at the company’s facility in Boca Chica, Texas, responded simply.”Dream come true,” Musk replied in a tweet.SpaceX is developing Starship to launch cargo and people on missions to the moon and Mars. Starship prototypes stand at about 160 feet tall, or around the size of a 16-story building, and are built of stainless steel — representing the early version of the rocket that Musk unveiled in 2019. The rocket lifts off on top of a Super Heavy booster, which makes up the bottom half of the rocket and stands about 230 feet tall. Together, Starship and Super Heavy are nearly 400 feet tall when stacked for launch.SpaceX rolls out Super Heavy Booster 4 in preparation for the company’s first orbital Starship launch.Elon MuskSpaceX has conducted multiple short test flights of Starship prototypes over the past year, but reaching orbit represents the next step in testing the rocket. The company in May revealed its plan for the first orbital flight, which would launch from the company’s facility in Texas and aim to splash down off the coast of Hawaii.Work to be doneA SpaceX crane lifts Starship prototype 20 on top of Super Heavy rocket Booster 4 during stacking operations on August 6, 2021.@elonmusk on TwitterMusk outlined four “significant items” that SpaceX aims to complete over the next two weeks in preparing Starship 20 for launch.He said SpaceX needs to add the “final heat shield tiles” to the ship, add “thermal protection” to the Raptor rocket engines in Booster 4, complete work on “ground propellant storage tanks” and add a quick disconnect arm to the top of the recently built launch tower. The quick disconnect arm connects power and fuel lines to the rocket before launch.While SpaceX’s fleet of Falcon 9 and Falcon Heavy rockets are partially reusable, Musk’s goal is to make Starship fully reusable — a rocket that is more akin to a commercial airplane, with short turnaround times between flights such that the only major cost is fuel.SpaceX stacks Starship prototype 20 on top of Super Heavy rocket Booster 4 on August 6, 2021.@elonmusk on TwitterOne important piece of making Starship fully reusable is improving its durability to survive the intense process of reentering the Earth’s atmosphere. Small hexagonal heat shield tiles are SpaceX’s answer to that problem, with the previously shiny Starship 20 rocket now covered in thousands of the tiles.Musk noted that work on the tiles is about “98% done” for Starship 20, as “the remaining tiles are unique shapes requiring machining.”NASA paying attentionA SpaceX crane prepares to lift Starship prototype 20 on top of Super Heavy rocket Booster 4 during stacking operations on August 6, 2021.@elonmusk on TwitterNASA has been paying close attention to Starship’s development, especially as the U.S. space agency earlier this year awarded SpaceX a controversial $2.9 billion contract to deliver astronauts to the surface of the moon using the rockets.Thomas Zurbuchen, NASA’s top official for science missions, told CNBC that he continues to watch progress on Starship.”Yes, I have been following this all along and am excited for @SpaceX achieving this milestone! Can’t wait to see it fly!” Zurbuchen wrote in a tweet.Musk replied to Zurbuchen in another tweet, touting the projected capabilities of Starship.”Due to its size & ability to return science instruments even from deep space, Starship will enable a whole new class of science missions,” Musk wrote.Become a smarter investor with CNBC Pro.Get stock picks, analyst calls, exclusive interviews and access to CNBC TV. Sign up to start a free trial today.