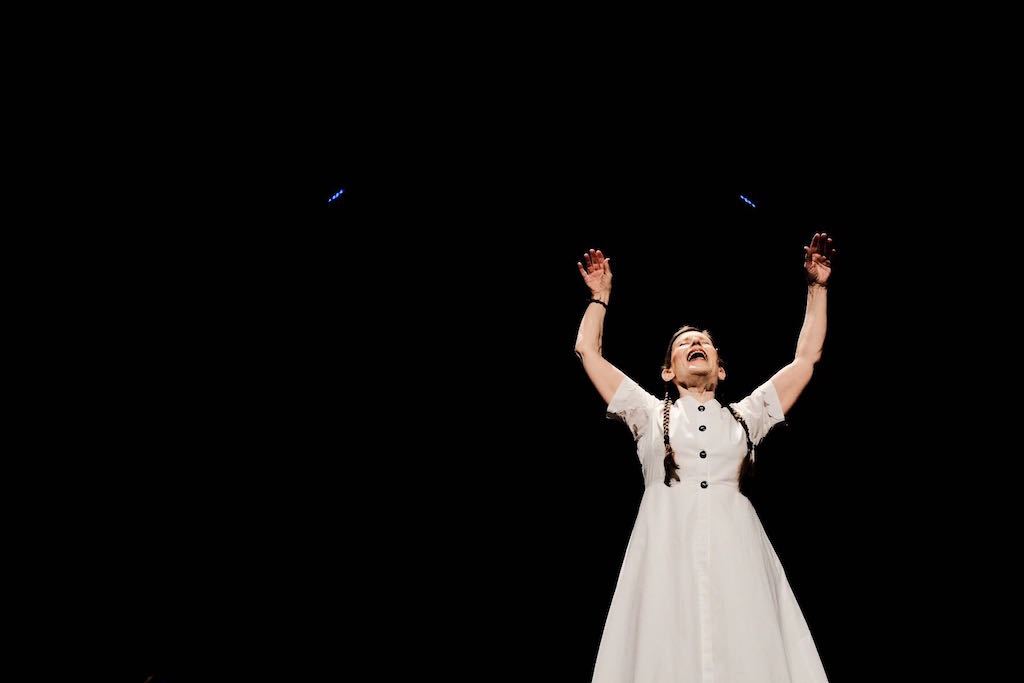 Lonnie Holley, the Alabama-born sculptor/musician, commanded the stage of a gutted warehouse turned concert venue in the Old Town district of Knoxville, Tennessee, a former industrial zone divided by railroad tracks whose weathered bricks now house apartments, java shacks, and rock ’n’ roll bars. It was barely past lunch on a Friday, but Holley seemed ready for church as he played lilting improvisations on a keyboard and offered stream-of-consciousness testimonies.

“Be still and know,” he told a crowd gathered for the annual Big Ears music festival in a city made indelible in the stories of native son Cormac McCarthy. Holley’s shirt bore the image of an all-seeing eye emitting a light beam of rainbow colors. Around him, the Messthetics—a trio featuring two former members of the punk band Fugazi—built a supple rhythmic backbone for spiritual reveries. Holley’s call for stillness was thoughtful advice, but it was also impossible to follow for anyone hoping to make the most of Big Ears, for which some 20,000 people convened two weekends ago for a supersize lineup of legendary composers, blue-chip contemporary music ensembles, rock heroes, jazz visionaries, electronic disrupters, drone mavens, folksters, punkers, and happy collaborative mashups of all of the above. Sprawling across downtown Knoxville’s cathedrals, theaters, and dive bars, the feted festival encourages constant flux, urging its audience to seep past lines of taste, genre, generation, and media to revel in everything all at once. 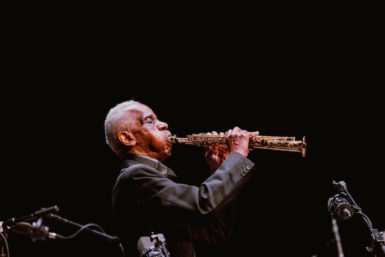 The Art Ensemble of Chicago’s Roscoe Mitchell at Big Ears.

“It’s a very open-hearted atmosphere,” said Meredith Monk, back for her second Big Ears appearances in three years. The composer and vocalist gave two public shows—including a scaled-down version of her Cellular Songs—as part of a 50th-anniversary tribute to ECM Records that brought a dozen or so artists associated with the label to Big Ears, including a radically expanded version of the jazz-minded Art Ensemble of Chicago. Monk lamented that she didn’t get to hang out much with her “old pals” because she had been working too hard: “It was nose to the grindstone,” she said.

Drawing on her past fusing choreography, theater, performance art, and her own unique vocalese since the 1960s, Monk led her ensemble through a buoyant rendition of her latest works, which evoked the origins of life itself with white-garbed performers sitting in a circle and chirping “You” in a round, over and over, each vocalist a stand-in for a biological cell.

Monk took well to the festival’s community vibe. “We were in a restaurant and a young woman came in,” she said of a fan who had seen her show with her mother and 95-year-old grandmother by her side. “We were crying the whole time,” the fan said. “Would you come and meet my family?” The grandmother, it turned out, was full of energy—and full of feedback Monk was happy to hear. “Sometimes I go to places and feel like the Lone Ranger,” the composer said. “We leave and don’t get to feel the effect that work has on people.” 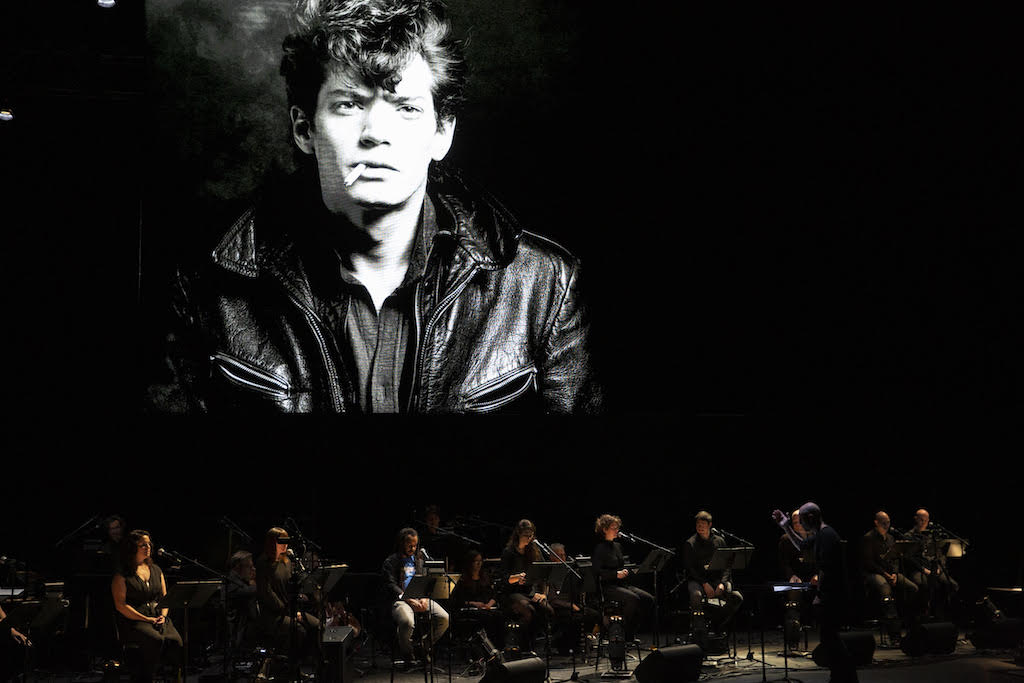 Triptych: Eyes of One on Another, as performed March 15-16 at the University Musical Society in Ann Arbor, Michigan.

The Mapplethorpe-inspired Triptych: Eyes of One on Another, which had its world premiere with the LA Phil in Los Angeles a month ago and will travel to the Brooklyn Academy of Music in June, enlisted artists and materials in what proved to be both a re-examination and an exaltation of the photographer’s enduring imagery, with its classical beauty and raw eroticism. Using poetry by Essex Hemphill and Patti Smith as well as words by librettist Korde Arrington Tuttle—all performed by the vocal group Roomful of Teeth plus Alicia Hall Moran and Isaiah Robinson—Triptych is a personal work for composer Bryce Dessner (also a member of the rock band the National). The composer grew up in Cincinnati, which in 1990 became the epicenter of the culture wars when the Mapplethorpe exhibition “The Perfect Moment” arrived at the city’s Contemporary Art Center. Dessner was then 14. “The county prosecutor shut it down and put the museum’s director in jail,” he remembered. “It was a giant event in Cincinnati and a big event for me as a teenager figuring out what a lot of issues were about, like the AIDS epidemic, censorship, and Mapplethorpe as an artist. It stuck with me.”

The new work marks the first time the Robert Mapplethorpe Foundation has granted theatrical rights to use the artist’s images as the core of a production, which in this case projected pictures above the performers on stage. “As a teenager, I was told I was not allowed to look at those,” Dessner said, “so the idea is to just look at the pictures. Looking at them in 2019 is obviously different from looking at them in 1990 or 1985 or 1978.”

Figuring out how to engage such aesthetically and politically loaded work wasn’t easy. “Making a piece about another artist’s work is difficult,” Dessner said. “Especially photography, which isn’t meant to be shown in a narrative way. We had to think a lot about how music could be a doorway into the poetry in those images. We came to it out of a great love and appreciation for the beauty of his photographs.” 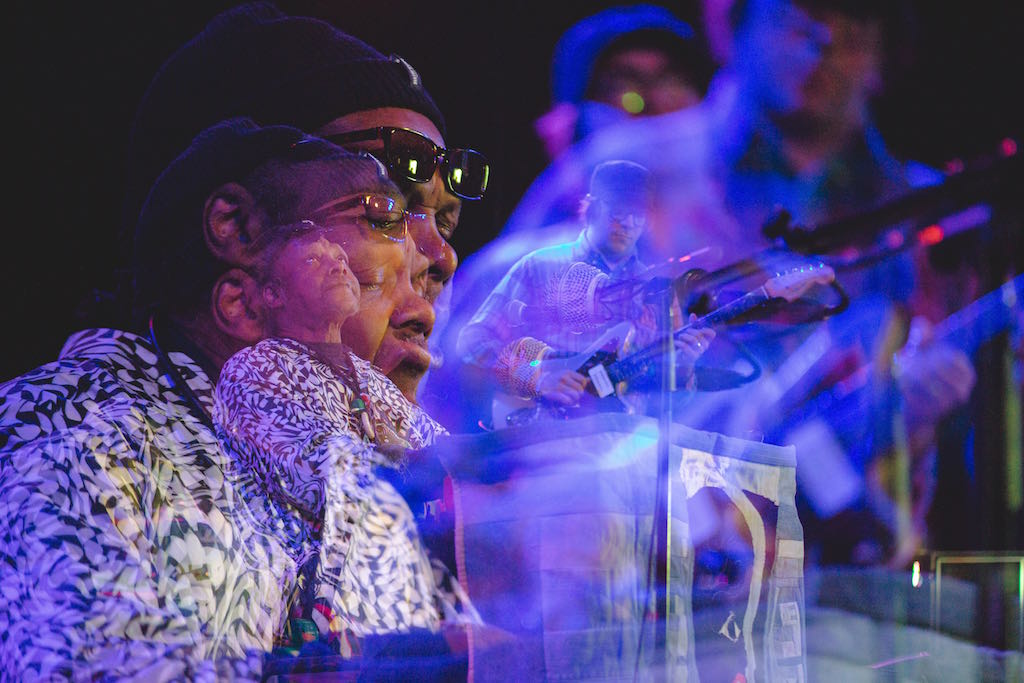 It’s not such a leap from Dessner’s thoughts about Mapplethorpe back to Holley, who frames his art-making as a sort of delivery system channeling the past and a critique of current times. He could even be describing the feelings of a teenage Dessner in the title to a recent song, from his 2018 album MITH: “I Woke Up in a Fucked-Up America.”

Though Holley himself said he holds out hope. “We are the thread for the stitches to mend up the sores,” he said while in Tennessee, signing albums at a merch table after his show. “We need to know that our activities, one way or the other, turn out to be a spiritual sacrifice to make things greater on Earth itself.”

The reason, Holley added, is clear: “Because this is the mothership.”