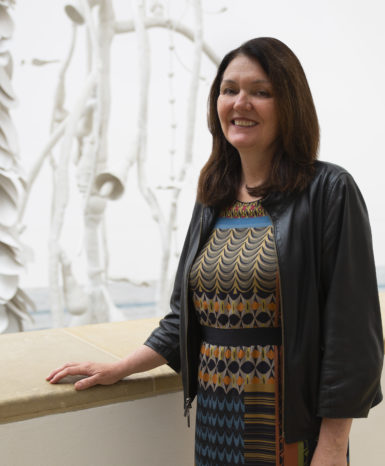 At MoMA, she will work closely with Inés Katzenstein, a curator of Latin American art and director of the museum’s Patricia Phelps de Cisneros Research Institute for the Study of Art from Latin America, to shape the collection and develop exhibition activities.

During her tenure at the Blanton Museum of Art, Adams oversaw the reinstallation of the Latin American permanent collection galleries in 2017 and played an integral role in the acquisition of Dr. Jacqueline Barnitz’s collection of Latin American art. She organized shows such as “The Avant-Garde Networks of Amauta: Argentina, Mexico, and Peru in the 1920s” (2019), “Words/Matter: Latin American Art and Language” (2019), and “Javier Téllez: Letter on the Blind for the Use of Those Who See” (2017), among others.

From 2001 to 2013, she was curator for the Diane and Bruce Halle collection in Arizona, organizing exhibitions of works at the Phoenix Art Museum, the Aspen Institute, and the Museum of Fine Arts, Houston. Adams has previously held positions at the San Antonio Museum of Art as well as the Phoenix Art Museum, and she developed and taught 20th-century Latin American art history courses at Arizona State University between 1997 and 1999.

Adams said in a statement, “MoMA has a long history of engagement with Latin American art and today has the most outstanding collection of its type. I look forward to building on that foundation and bringing new perspectives to the collection and to exhibitions.”

Ann Temkin, chief curator of painting and sculpture at the museum, said, “Beverly Adams brings to MoMA a distinguished record as a scholar and curator of Latin American art. She also brings an enthusiastic and collegial viewpoint as we think across geographical boundaries to offer new readings of the history of modern art.”