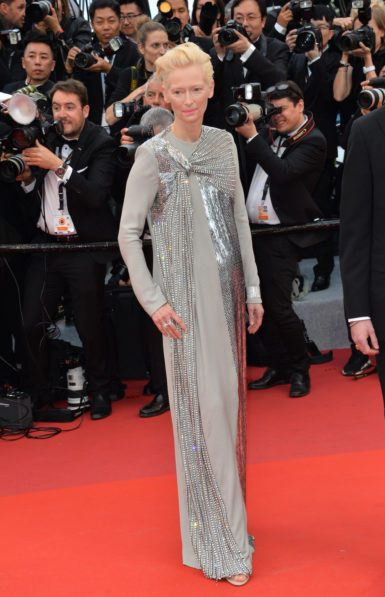 Swinton at the Festival de Cannes earlier this month.

Sotheby’s is moving its Aboriginal art auction from London to New York. The first edition is scheduled for November. [ARTnews]

Gagosian dealer Sarah Hoover shared everything that she ate during a recent two-week trip to Japan. [Vogue]

Treasury Secretary Steve Mnuchin said that a planned 2020 unveiling of a new design for the $20 bill with Harriet Tubman on it has been delayed to 2026. During the 2016 presidential campaign, Donald J. Trump described the proposed Tubman design as “pure political correctness.” [The New York Times]

Ai Weiwei slammed Volkswagen in an op-ed for using an image of one of his artworks in an advertisement and for the nature of its relationship with China. [The Guardian]

The Japanese artist Yukinori Yanagi is now represented by Blum & Poe worldwide. He’ll have a show with the gallery in Tokyo later this year, and another, at its Los Angeles branch, in 2020. [ARTnews]

Acress Tilda Swinton has curated a show of photography at the Aperture Foundation in New York. Set to open Friday, It includes work by 11 artists, including Mickalene Thomas, Lynn Hershman Leeson, and Elle Pérez. [The New York Times]

The directorship of the Frick Collection in New York has been named after Anna-Maria and Stephen Kellen, the parents of patron Marina Kellen French. [Press Release/Frick Collection]

William J. Carpenter has been named executive director of the Southeastern Center for Contemporary Art in Winston-Salem, North Carolina. [Artforum]

The new director of the Polk Museum of Art at Florida Southern College in Lakeland is H. Alexander Rich, a professor of art history at the school. [The Ledger]

Rat sightings are have increased dramatically in New York in recent years. One cause: gentrification. [The New York Times]