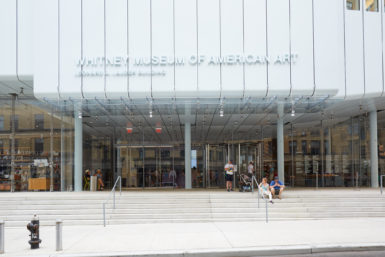 Holland Cotter looks into the recent flux of protests against museums, including those of Decolonize This Place, in the context of similar protests of the past. He writes, “Surely the moral intelligence of the entire institution should be brought to bear on judging, case by case, the nature of the support being offered, with the trust that a balance of idealism and pragmatism will prevail in decision-making.” [New York Times]

The protests at the Whitney are also throwing the upcoming Whitney Biennial into a new light, and eight participating artists are highlighted by the Times in preview of the opening next week. “All these institutions come with politics,” says artist Nicholas Galanin.  [New York Times]

Actor-turned-artist Val Kilmer denies that he ripped off the style of sculptor Bale Creek Allen, whose tumbleweed sculptures bare a resemblance to the ones Kilmer creates.
[Yahoo]

A look back at the kitschy 1983 film 2019: After The Fall of New York, which prominently features Pablo Picasso’s Guernica within a villain’s lair. [Gothamist]

The stark, shadowy portraiture of British photographer Jack Davison will be released in his first book—titled, simply, Photographs. [The Cut]

Sheron Rupp’s photos of rural America are delicate, heartfelt, and teeming with humanity. [The New Yorker]

New York’s Wildenstein & Co. gallery is being sued for $275,000 by collectors who allege they were sold a fake painting by Pierre Bonnard. [Courthouse News]