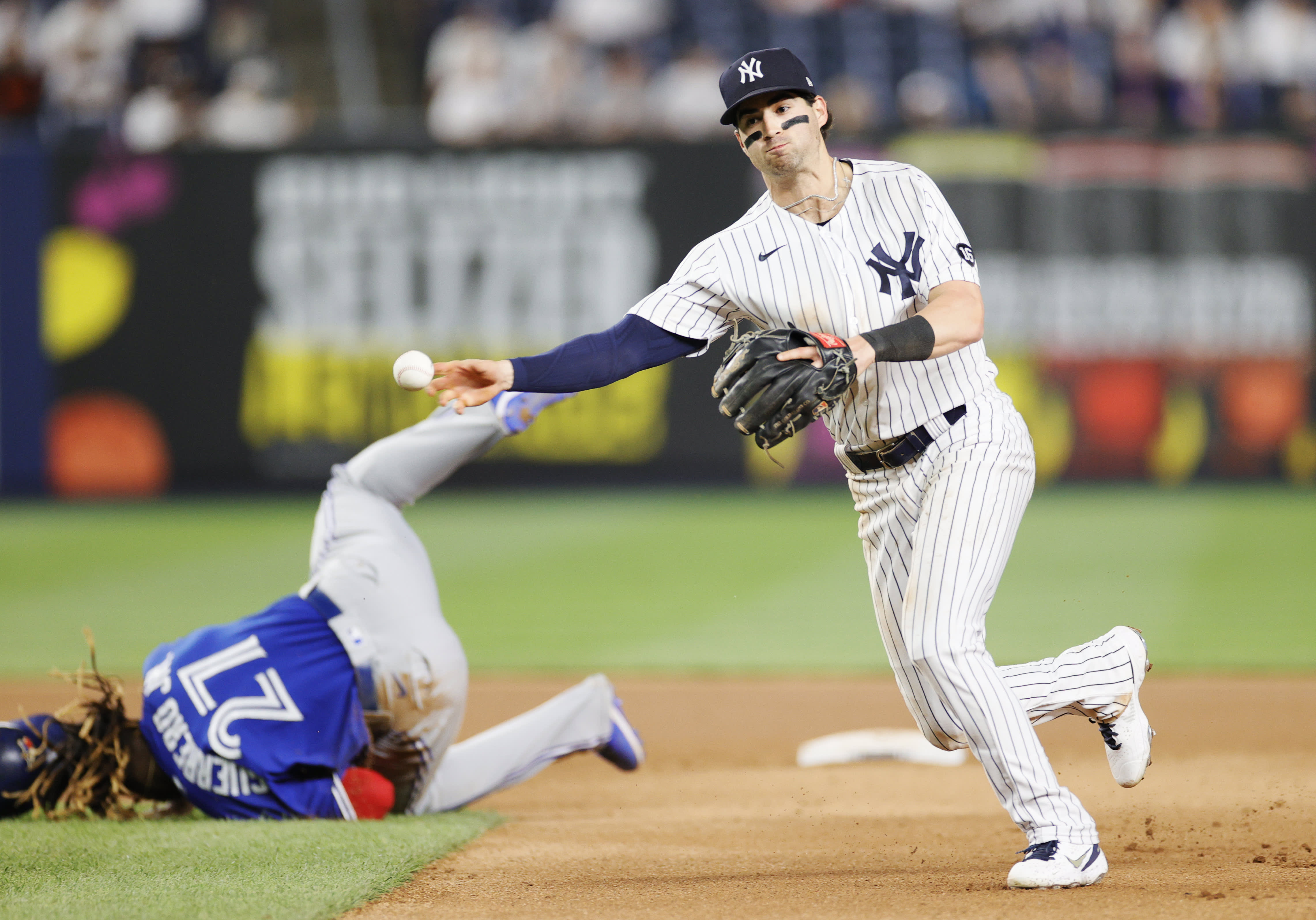 Tyler Wade #14 of the New York Yankees turns a double play as Vladimir Guerrero Jr. #27 of the Toronto Blue Jays falls to the ground during the sixth inning of Game Two of a doubleheader at Yankee Stadium on May 27, 2021 in the Bronx borough of New York City.Sarah Stier | Getty ImagesMajor League Baseball is entering the NFT space with the help of Fanatics Chairman Michael Rubin and the formation of a new company called Candy Digital.The firm agreed to a multiyear licensing agreement with MLB to produce nonfungible tokens. The first digital collectible will be an exclusive Lou Gehrig NFT, which will be available for bidding on the Fourth of July. It will honor Gehrig’s “Luckiest Man” speech on July 4, 1939, when the ironman New York Yankees first baseman retired after contracting amyotrophic lateral sclerosis, a disease that impacts the nervous system.The Lou Gehrig NFT will also commemorate MLB’s first Lou Gehrig Day on Tuesday. The league wants to raise more awareness to help combat ALS, also referred to as Lou Gehrig’s Disease. Specific terms of Candy Digital’s agreement with MLB were not made available. But in licensing deals, MLB earns a royalty from primary and secondary sales of its assets. Candy Digital will earn revenue through primary sales of MLB’s assets and from NFT trading fees.NFTs are tied to a blockchain, a digital ledger similar to the blockchains used for digital currencies like bitcoin. This effectively gives each NFT a unique and nonhackable certificate of authenticity. Candy Digital will run its baseball NFTs on the Ethereum blockchain. MLB will make its entire digital catalog available. So one day, Candy Digital could make NFTs of legends like Babe Ruth and Jackie Robinson.Lou Gehrig #4 of the New York Yankees is shown before the mic delivering his farewell speech on Lou Gehrig Day on July 4, 1939 at Yankee Stadium in the Bronx, New York.The Stanley Weston Archive | Archive Photos | Getty Images”From trading cards to autographed balls, baseball fans have demonstrated their passion for the sport and its players through collectibles for decades,” MLB Commissioner Rob Manfred said in a statement. “In working with Candy Digital to offer NFTs to MLB fans, we’re delivering an exciting new addition to the robust baseball collectible market.”Candy Digital declined to reveal its enterprise value or how much it raised to start. But in comparison, Dapper Labs, a similar firm that launched NFT product NBA Top Shots, raised $12.9 million via a Series A in 2018, according to Crunchbase. Dapper is valued at over $7 billion, according to The Information.Founders of Candy Digital include Rubin, who is also a part of the Philadelphia 76ers ownership group, and Mike Novogratz, founder of crypto merchant bank Galaxy Digital. Entrepreneur and VaynerMedia CEO Gary Vaynerchuk will serve as a board member and advisor. Fanatics will serve as the majority owner of Candy Digital, and Scott Lawin is interim CEO.Asked if MLB is an investor in Candy Digital, the company declined to comment. But the league is an investor in Fanatics through prior sports merchandise dealings.The NFT sector exploded this year, with NBA Top Shots one of the main attractions. In March, Tampa Bay Buccaneers tight end Rob Gronkowski was one of the first athletes to release his version of the digital collectible. And boxing champion Floyd Mayweather Jr. also joined the NFT space last month.Candy Digital says it will start will sports NFTs but wants to expand into entertainment and music.”At its core, Candy Digital is about allowing everyone to own a piece of their passion — whether that be sports or gaming, fashion or art, music or pop culture, the goal is to broaden the fanbase of digital collectibles,” Rubin said in a statement.