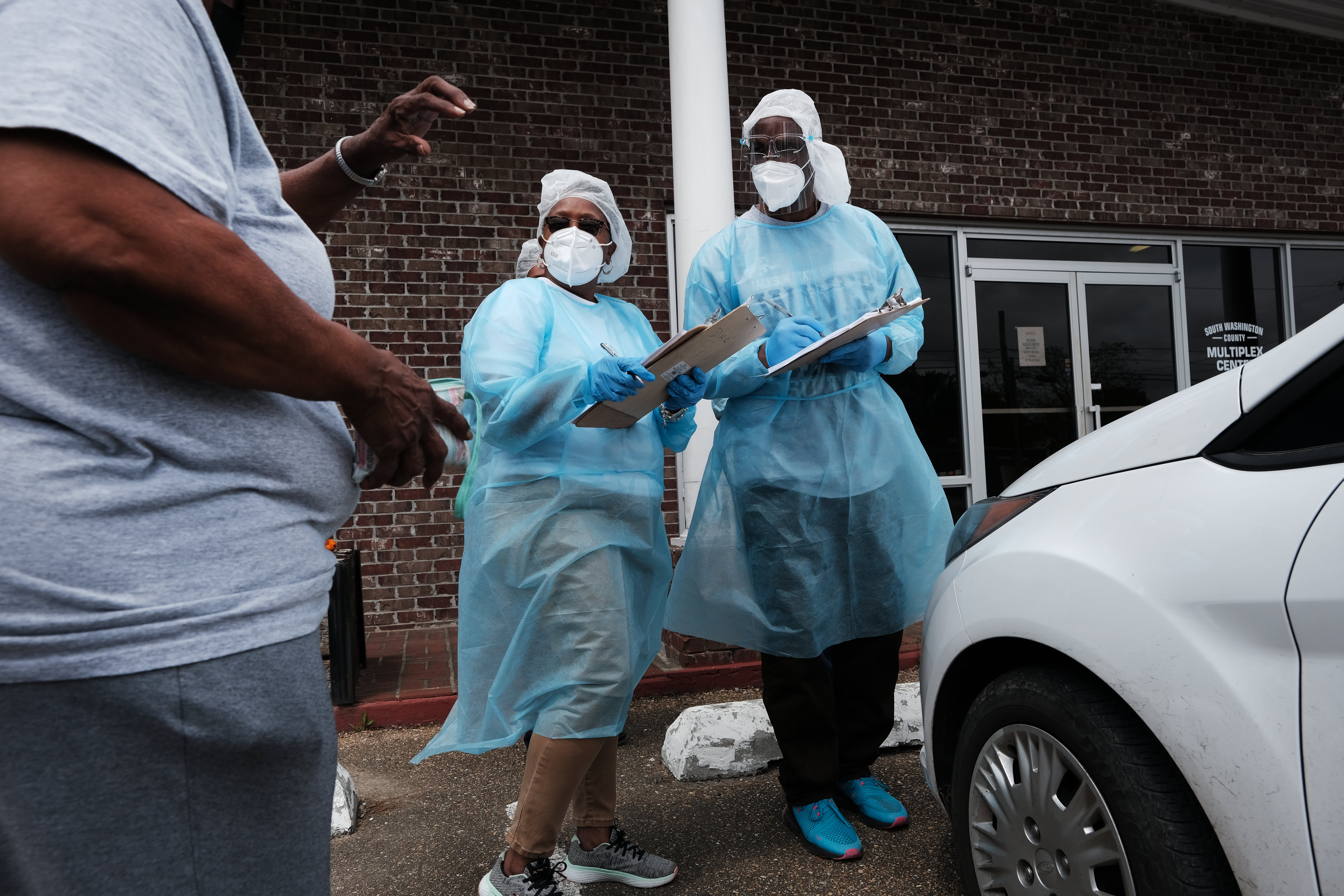 Covid cases are doubling across several states and hospitals are starting to fill up again, especially in states with lower vaccination rates as the highly contagious delta variant rips across the country.Two of the states hit hardest last week — Mississippi and Louisiana and — have the nation’s worst and fourth-worst vaccination rates and rapidly climbing Covid hospitalizations.Louisiana Health Officer Dr. Joseph Kanter, said Friday the state was in the middle of “a very dangerous surge.” Gov. John Bel Edwards said the outbreak there was so bad, the White House designated Louisiana as a “state of concern.” He and Kanter urged everyone, including fully vaccinated people, to wear masks indoors and work from home when possible.”To ensure their own safety people in Louisiana should take precautions immediately. Masking and testing will limit death and suffering until we make it through this,” he said in a press release. New Orleans officials issued a citywide indoor mask advisory earlier in the week.The surge in average new cases, which have jumped by more than 105% over the past week to a seven-day average of 7,592, has some Louisiana residents rushing to get vaccinated, state officials said. Just 41.2% of the state’s residents have had at least one Covid shot, according to CDC data, but many are rushing to get them as evidence mounts that the delta variant is attacking mostly unvaccinated people, state officials said. More than 58,000 Louisianans received their first vaccine doses last week, a 153% increase from the previous week, according to data compiled by the Centers for Disease Control and Prevention.Medical workers with Delta Health Center wait to vaccinate people at a pop-up Covid-19 vaccination clinic in this rural Delta community on April 27, 2021 in Hollandale, Mississippi.Spencer Platt | Getty ImagesNeighboring Mississippi also saw vaccinations jump last week as average daily cases climbed by more than 132% a seven-day average of 910 new cases per day as of Sunday, according to a CNBC analysis of data compiled by Johns Hopkins University. The state’s administered at least one shot to just 38.6% of its population — ranking it last in the country.In Mississippi, the state’s given almost 27,000 first doses administered over the seven days through Sunday, 42% more than the prior week.”Y’all, we’re going to have a rough few weeks,” State Health Officer Dr. Thomas Dobbs, the state’s former top epidemiologist, told reporters at a press conference last week. “Delta is hitting us very strongly. We anticipate that we’re going to continue to put additional pressure on the healthcare system.”Across the nation, roughly 73% of available hospital beds are currently in use, about 4.5% are taken up by Covid patients, according to CDC data. But they account for a greater share of available ICU beds, comprising about 11.9% of all intensive care patients.In Louisiana, Covid patients are using 8.4% of all available beds and about 16.8% of ICU beds, according to the CDC. Covid patients in Mississippi are taking up 7.2% of all hospital beds and 23% of ICU beds.Dobbs said there are currently 13 hospitals across Mississippi that have “zero ICU beds and a significantly higher number than that have less than 10% availability.” He said 93% of the state’s Covid cases and 89% of the deaths in the past month are among unvaccinated individuals.Vaccination rates there are also climbing. The the state administered almost 27,000 first doses over the seven days through Sunday, a 42% jump from the prior week. Vaccine reluctance is high across the state, officials said, adding that they are trying to convince residents one person at a time to get the shots. State officials pleaded with elderly and vulnerable residents earlier this month to avoid large indoor events.”We hear it all, from the microchip insertion to the depopulation plan using the vaccine to the magnetizing people. I mean you name it, we’ve heard it,” state health department Chief Medical Officer Dr. Dan Edney told reporters last week.Hospitals, in the meantime, are keeping a close watch on their ventilator supplies.”Our number of cases is increasing rapidly,” Dobbs said. “Our ICU utilization is starting to rise to levels not seen since last summer, and we’re also seeing an increase in the utilization of our mechanical ventilators.”CNBC’s Nate Rattner contributed to this reporting.

CDC to reverse indoor mask policy, saying fully vaccinated people should wear them indoors in Covid hot spots
Get vaccinated or fired — Ken Langone says his businesses will mandate it after full FDA approval
To Top
error: Content is protected !!