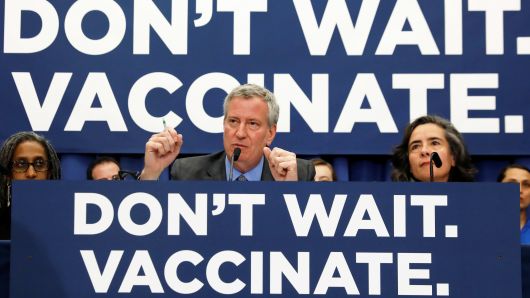 New York City Mayor Bill de Blasio speaks during a news conference declaring a public health emergency in parts of Brooklyn in response to a measles outbreak, requiring unvaccinated people living in the affected areas to get the vaccine or face fines, in the Orthodox Jewish community of the Williamsburg neighborhood, in Brooklyn, New York City, April 9, 2019.

This is the worst year for measles in the U.S. since the disease was declared eradicated from the country in 2000, the Centers for Disease Control and Prevention announced Wednesday.

As of Wednesday afternoon, 695 cases of measles have been confirmed in 22 states, the agency said, surpassing the previous high of 667 cases for all of 2014. Outbreaks in Washington and New York drove this year’s surge, the CDC said.

People traveled to countries with large measles outbreaks, and brought them back to communities where some people chose not to be vaccinated, leading to the spread of the highly contagious disease, the CDC said. The longer the outbreaks continue, the greater the chance that measles will “again get a sustained foothold” in the U.S., the agency added.

“With a safe and effective vaccine that protects against measles, the suffering we are seeing is avoidable,” Health and Human Services Secretary Alex Azar said in a statement.

Receiving both recommended doses of the measles, mumps and rubella (MMR) vaccine is 97% effective in preventing the measles, according to the CDC. Measles is highly contagious, infecting 90% of unvaccinated people who are exposed to the disease, the agency said.

For more on investing in health care innovation, click here to join CNBC at our Healthy Returns Summit in New York City on May 21.

Rockland County and New York City are home to large Orthodox Jewish populations, where some people have refused to vaccinate their children. New York City issued a mandate on April 9 requiring residents in parts of Brooklyn to get vaccinated against measles, mumps and rubella or face a $1,000 fine. It also closed a Jewish school that allegedly refused to provide vaccination records.

The CDC said a “significant factor” in the outbreaks affecting these communities are due to misinformation about the safety of the MMR vaccine.

“Some organizations are deliberately targeting these communities with inaccurate and misleading information about vaccines,” the agency said in a statement.

Jewish Orthodox nurses are trying to debunk misinformation they say people who are against vaccinations have spread through these communities. Meantime, health officials are bracing for an uptick in cases after Passover, a Jewish holiday, which ends Saturday.

Measles starts with a runny nose, high fever and cough. It spreads to a rash and can lead to complications like pneumonia or brain swelling, which can be especially dangerous for young children.

The news on semiconductors is bad, and it will likely get worse