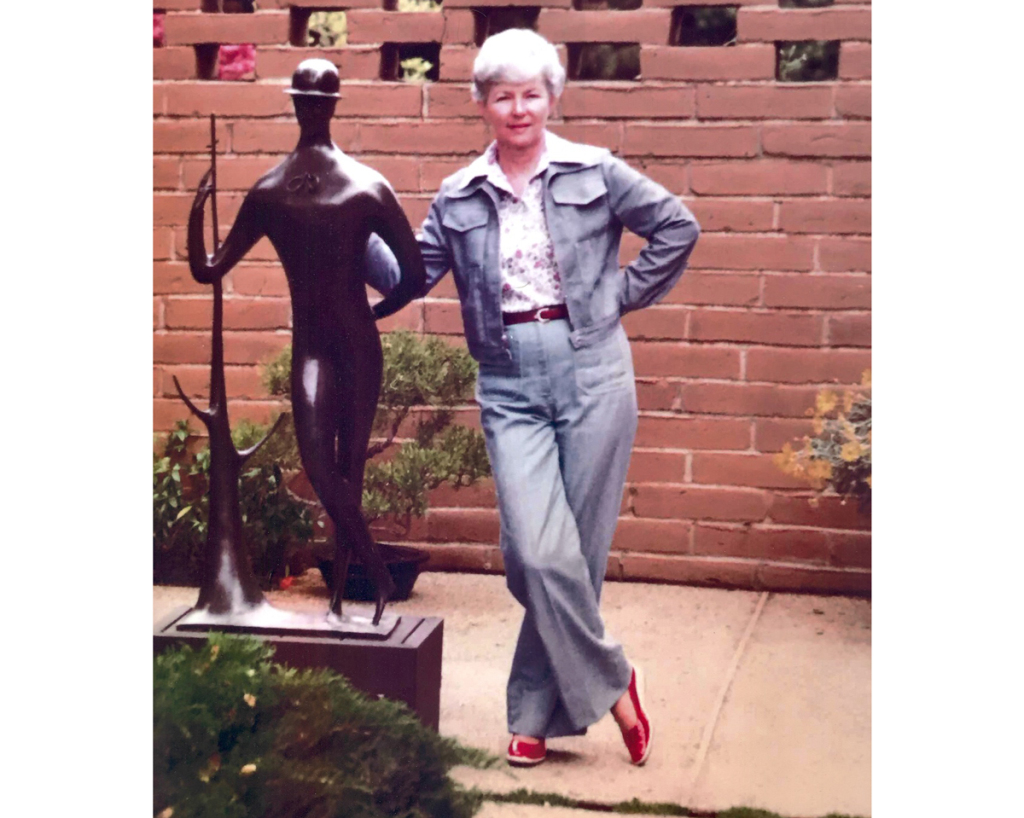 When Mary Margaret “Moo” Anderson arrived in San Francisco with her husband Harry “Hunk” Anderson in 1964, she may not have yet known that she would leave an indelible mark on the Bay Area. With the help of two locals, an art historian and an artist, Moo and Hunk would soon begin to build what would become one of the pre-eminent collections of modern and contemporary American art.
Art historian Albert Elsen and painter Nathan Oliveira, both professors at Stanford University at the time, served as guides to the Andersons for their early collecting practices, helping shape the beginnings of their art holdings. More importantly, the two professors also introduced the Andersons to the practices of local artists, like Wayne Thiebaud and Richard Diebenkorn, whose work they collected alongside pieces by New York artists like Jackson Pollock, Robert Motherwell, Helen Frankenthaler, and Mark Rothko.

And though their art collection was already legendary, in 2011 the Andersons made another decision that would allow for their vision to live on by donating 121 works, including Willem de Kooning’s Woman Standing – Pink (1954–55) and Joan Mitchell’s Before, Again IV (1985), as well as a robust selection of art books and catalogues, to Stanford University in nearby Palo Alto.
Stanford subsequently established the Anderson Collection, which opened in 2014 and has transformed the university’s ability to tell the history of art to its students and the local community. On the occasion of the museum’s opening, Moo said, “It’s good to study art in books, but something happens in the presence of the original—it affects the brain, taste, feelings and more,” adding of the decision to donate works from the collection to Stanford, “I think in order to enjoy art, you have to share it.”

From Color Fields to Light and Space
Years of passion and care went into creating such a celebrated repository of works. Moo and Hunk were inspired to start an art collection of their own in the early 1960s after a trip to Europe.
They had set out with the intention to acquire Impressionist works, but they “came to understand that the availability of those works was limited, both from an economic perspective and from the fact that most of those great works [were already] in collections,” according Jason Linetzky, director of the Anderson Collection at Stanford.

The couple had recently settled in the Bay Area, where Hunk opened the headquarters for his food service company called Saga Corporation, and they met Elsen and Oliveira, the Stanford professors, by virtue of their interest in establishing a collection and the company’s physical proximity to the college’s campus.
Among the first works that the Andersons collected were by local artists like Oliveira, Richard Diebenkorn, and Paul Wonner. But the Andersons were also early buyers of Abstract Expressionist works by Jackson Pollock, Willem de Kooning, and other major figures in the movement.
The couple corresponded with and visited New York dealers and galleries with increasing frequency as the years went by, and their interests ranged from the New York School’s Abstract Expressionist and color field works to Bay Area figuration and later California’s Light and Space movement.
“They really loved pushing the envelope,” Mary Patricia “Putter” Anderson Pence, Moo and Hunk’s daughter, told ARTnews, noting their early support and advocacy for artists like Clyfford Still and Philip Guston. “They developed wonderful friendships with many, many artists, and I think that was really important to them.”

Inviting the Community In
The Andersons would come to build what would come to be known as “a collection of collections,” Linetzky said, referring to the their collections of paintings, sculptures, and works on paper, as well as a renowned library of art historical texts and catalogues and a collection of ephemera, both of which Moo played an integral role in cultivating.
That sensibility informed not only the way that the Andersons collected artworks, but also how they shared their holdings with their community. For one, Moo and Hunk readily welcomed visitors—including Stanford students and faculty, museum curators and directors from around the world, and others—to their home to view the collection.
Steve Nash, a longtime friend of the Andersons who studied under Elsen at Stanford and went on to work as chief curator of the Fine Arts Museums of San Fransisco from 1988 to 2001, called the couple’s home “a pilgrimage point for anybody interested in modern art.”
“They were so gracious and so generous in opening up their home to anybody that had any sort of interest in their collecting areas,” Nash told ARTnews, comparing visits to the home to “being absorbed into a huge, sensuous cloud of great art.”
He added that the Andersons “inspired a lot of other people to not just collect art, but to collect it at the highest possible quality level, just as they had done.”

Local Philanthropy
It was this devotion to education and providing an enriched arts experience to the local community that led the Andersons to gift so much of their art holdings in 2011 to Stanford in the first place. Then, just before her death at age 92 in 2019, Moo made another significant contribution to Stanford with the donation of two more major works from the family collection: Jackson Pollock’s Totem Lesson 1 (1944) and Willem de Kooning’s Gansevoort Street (1949–51). The Pollock painting remains the earliest artwork in the museum’s collection.
With a collection consisting of “some of the finest works made by some of the most well-known and highly respected artists of those times,” Stanford has been able to greatly “expand opportunities for teaching and learning,” Linetzky said.
“She always loved education,” Pence said of Moo. “She was involved with neighborhood schools and giving back, and I think she resonated with the idea that [the collection] should go to a top notch university where students and the community will see this art for free forever.”
On its website, the Anderson Collection synthesizes the collectors’ philosophy with a quote: “Have we seen it before, and could we have thought of it?” Linetzky said that this mantra points to the the ways the Andersons asked themselves if a work was “really new or fresh or unique and causing us to think differently” and exemplified the way Moo herself “always welcomed curiosity.”
“She really strove for learning and was constantly inquisitive in a very open and generous way,” Linetzky said of Moo, who often attended special programs at the Anderson Collection, greeted visitors in the gallery, and developed relationships with the people who work at the museum. “There is a spirit of generosity to the collection that I hope we can live up to as we share it.”
Moo’s involvement with local organizations was also far reaching. She had created an art program at the Sacred Heart Schools in the Peninsula in the early days of her collecting, so as to bring curated exhibitions of art to students of all ages. Moo was also involved with a hospital art commission run by Stanford, and she worked with the St. Francis Center in the Bay Area, which provides essential services to low-income families.
In more recent years, Moo had collected contemporary works by artists including Kathy Butterly, Nick Cave, and McArthur Binion, among others, and she donated some 30 contemporary pieces to Sacred Heart at the end of her life. And Pence, her daughter, has taken up the familial tradition of art collecting, with pieces by Paul Anthony Smith, Jordan Nassar, and others among her own recent acquisitions.
“She really touched a lot of people,” Pence said of her mother’s legacy in the art world and beyond.