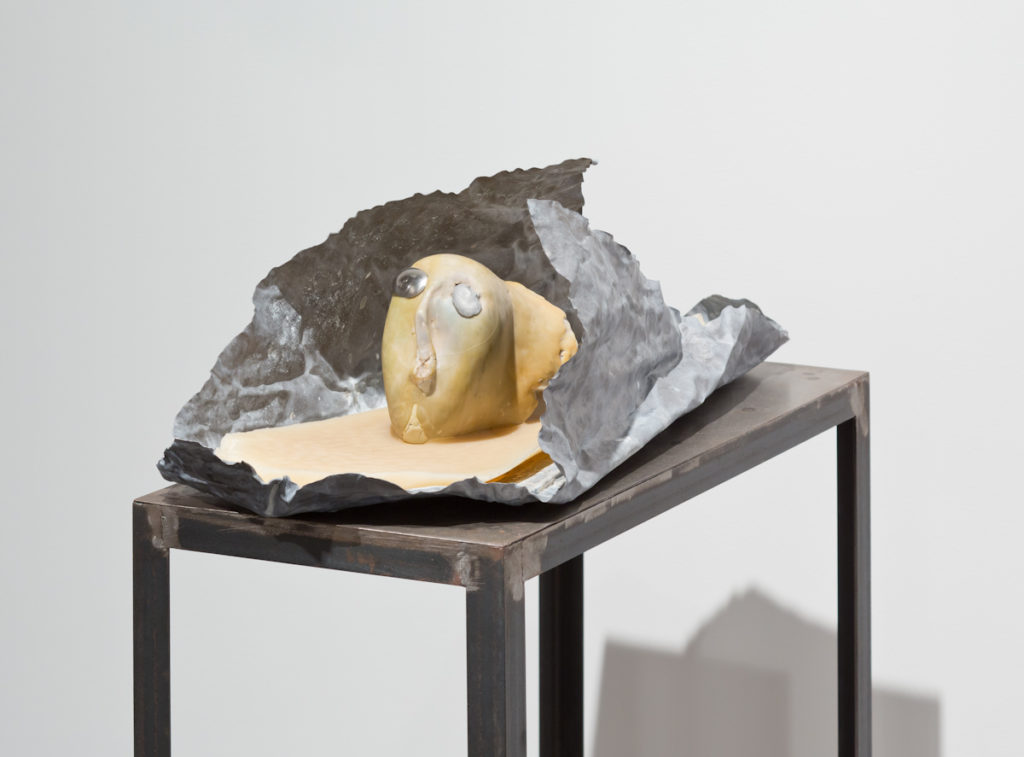 Marisa Merz, whose bewitching, enigmatic sculptures and paintings rank among the signal works of the Arte Povera movement, and of postwar European art, died Friday. She was 93.

Building assemblages from materials like unfired clay, tin, lead, and stone, or carefully stitching together wire, fabric, and thread, Merz made rough-hewn art that can look at once tough and precarious, vital and vulnerable. Her sculptures are as multivalent and complicated as people, as life.

Merz was the lone woman among a loose coterie of men who came to be grouped in late-1960s Italy under the banner of Arte Povera—”poor art”—a term coined by art critic and curator Germano Celant to denote a tendency he identified of artists using humble, raw materials. Experimenting with everything from coffee beans to cloth to tree branches to create their sculptures, they aimed to channel the symbolic force of the stuff of both everyday life and heavy industry.

Married to one of the leading exponents of that machismo-heavy movement, Mario Merz, Marisa was for decades less celebrated than him and many of their peers, though her career blossomed as time went on, and particularly over the past decade. Recent exhibitions have made it clear that she was the most versatile and inventive member of the group.

Marisa Merz was born in Turin, Italy, in 1926, and it is known that her father worked for the local Fiat plant. Beyond that, little is on the record about her biography. She rarely spoke to the press and declined to provide the standard information typically asked of artists. It is, at least, clear that she married Mario in 1960, the same year that they had a daughter, Beatrice, who founded the Fondazione Merz, an arts center in Turin. (Mario died in 2003 at the age of 78.)

In 1966, working at their home in Turin, Merz sliced up aluminum sheeting, stapling the ribbons together, painting some, and hanging them from the ceiling in the kitchen. These Living Sculptures, as she called them, have become some of her most recognizable works, recalling underwater creatures or classical modernist sculpture that has been blown up, reassembled, and made to fly.

One of Merz’s key works from this early period, Bea (1968), refers to her daughter, spelling out the letters of its title with thread in earthen tones—blue-gray, beige, forest green. The forms are craggily, suggesting plant specimens or some other kind of living being, and metal needles are stuck through it, perhaps providing support for growth but also evoking pain, even torture.

While many of her Arte Povera compatriots indulged a certain level of self-seriousness, even portentousness, in their art, especially in its more grandly scaled iterations, Merz maintained a commitment to work that invited intimate encounters, and that alluded to the body—to its care and suffering. From 1968 to the mid-1970s, she used thin nylon thread to knit little shoes—Scarpette—that evinced a potential for both protection and constraint.

Merz also forged an astonishing array of ceramic heads, their shapes or features fractured, abstracted, split open, or even melting in diffuse aways. But such deformations—an imprecise word—almost never look grotesque or cruel: the visages are calm, tranquil, even beatific, an effect amplified by the artist’s occasional use of gold leaf and judicious blasts of bright color. These beings revel in their singular forms.

A spiritual quality also pervades Merz’s drawings and paintings, disciplines that she worked in more regularly later in life. Such works are filled with ghostly, ethereal heads that can bring to mind religious icons. They are floating in space, only as visible as they would like to be.

“We mourn the visionary, great artist Marisa Merz,” Carolyn Christov-Bakargiev, the director of the Castello di Rivoli Museo d’Arte Contemporanea in Turin, said on Twitter. “She saw the world distilled through her inner eye; so keen, she was an angel on earth.

In 2017, Merz was the subject of an exhilarating retrospective that began at the Met Breuer in New York and traveled to the Hammer Museum in Los Angeles, the Serralves Museum in Porto, Portugal, and the Museum der Moderne Salzburg in Austria. It was the capstone of a late-career ascendence that had also seen her win the Golden Lion for Lifetime Achievement at the 55th Venice Biennale, in 2013.

“I recently asked her how some of her works came about, what was the thought, inspiration, or approach behind them,” Beatrice told T: The New York Times Style Magazine in 2017, in advance of that retrospective. “She answered that she always and only did what she liked, and that every work originated from the pleasure of making it, from a spontaneous gesture or finding of a particular object or material.”