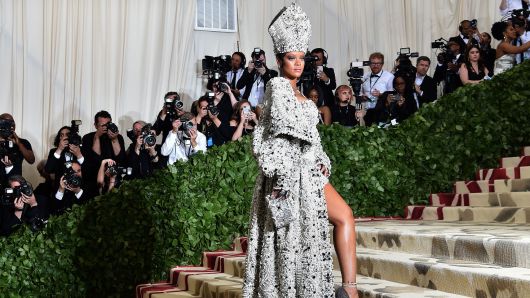 LVMH announced Friday that it will partner with Robyn Rihanna Fenty to create a new luxury fashion house under the label “Fenty.”

This would put Fenty under the same umbrella as LVMH’s other luxury fashion houses including Louis Vuitton, Christian Dior, Fendi and Givenchy.

LVMH said the Paris-based brand will launch its first line this spring. That line will feature ready to wear items developed by Rihanna, who becomes the first woman to launch an original brand at LVMH. She is also the first woman of color to head one of the group’s houses.

Rihanna said in a statement that the opportunity to design a line with LVMH is “an incredibly special moment.”

“Mr. Arnault has given me a unique opportunity to develop a fashion house in the luxury sector, with no artistic limits. I couldn’t imagine a better partner both creatively and business-wise, and I’m ready for the world to see what we have built together,” Rihanna said in a statement referring to Bernard Arnault, chairman and CEO of LVMH.

@rihanna: big day for the culture. thank you Mr.Arnault for believing in this little girl from the left side of an island, and for giving me the opportunity to grow with you at @LVMH

LVMH has recently made efforts to be more inclusive on issues of gender and race, appointing the first female designers of Givenchy and Dior in 2017 and 2016, respectively.

Since her debut as a pop star, Rihanna has turned heads at red carpet events and is seen as a fashion icon. She has since leveraged that influence into successful partnerships with brands like Mac Cosmetics and Puma.

“Everybody knows Rihanna as a wonderful singer, but through our partnership at Fenty Beauty, I discovered a true entrepreneur, a real CEO and a terrific leader,” Arnault said in a statement.

Rihanna previously partnered with LVMH in 2017 to create her beauty brand “Fenty Beauty,” which operates out of San Francisco. She also has her own lingerie brand, Savage x Fenty. These brands were lauded for their inclusivity in both promotional materials and product offerings.

With her own house in LVMH, Rihanna is now part of a luxury products group with a market valuation of more than $190 billion.

site issues have been resolved

Amazon is building its own carbon-neutral UPS, Bank of America says