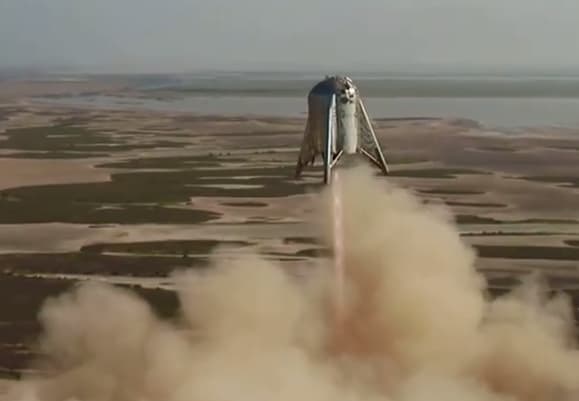 SpaceX flew its prototype rocket many times higher and longer than ever before in a test on Tuesday, pushing the company one step closer to its dream of sending humans and cargo to Mars.

Nicknamed Starhopper, the rocket is the prototype for SpaceX’s vehicle called Starship. The company is building the enormous rocket to achieve its goal of transporting up to 100 people in the space flights.

SpaceX aimed to fly Starhopper to about 500 feet altitude. The rocket returned back to the concrete pad from which it launched, landing in a cloud of dust and smoke Here’s what the test flight looked like, which appeared to last just under minute.

The flight took place at SpaceX’s facility in Boca Chica Beach, Texas. In July the company flew Starhopper to about 65 feet in the air, when it first left the ground for a few seconds. Starhopper has just one Raptor engine. The final version of Starship will have multiple Raptor engines, while the Super Heavy booster that launches it will have as many as 31 Raptor engines.

Starship is built to be fully reusable, meaning the entire rocket will be able to launch, land and launch again — more akin to an airplane than a traditional rocket. Currently, SpaceX is able to land and reuse part of its Falcon 9 and Falcon Heavy rockets. But Starship would take that to the next level and, especially, would help lower the cost per flight of a rocket launch.

The company is steadily raising funding for Starship and its internet satellite network, called Starlink. So far this year, SpaceX has sought more than $1.3 billion across three funding rounds. With over $1 billion already raised, SpaceX’s valuation has risen to more than $33.3 billion.