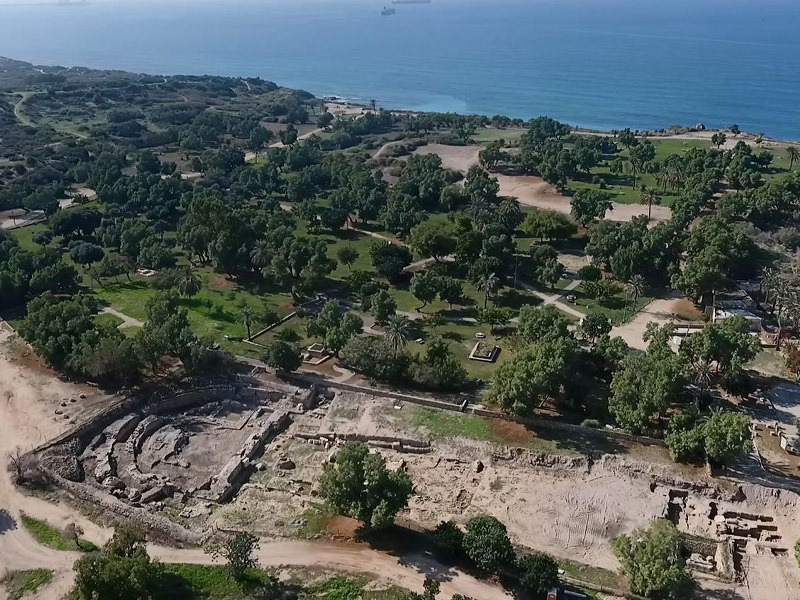 The Israel Antiquities Authority announced on Monday that archaeologists have discovered a 2,000-year-old Roman basilica established by King Herod. Unearthed in Ashkelon National Park, the basilica, found with a nearby odeon (ancient theater), is the largest structure of its kind in Israel.
King Herod the Great, who is perhaps best known from the Christian Bible for ordering the murder of Bethlehem’s infants in an attempt to kill the newborn baby Jesus, was appointed by the Roman Empire to rule over Judea, serving from 37 to 4 B.C.E. The basilica he erected stood at the heart of Ashkelon—then a major seaport with a thriving trade economy—and functioned as a hub for all aspects of public life. In the Roman Era, it was common for citizens to conduct business and legal affairs, to socialize, and to attend religious ceremonies and performances there.

The massive public building contained a central hall flanked by 40-foot marble columns and two side halls. The floors and walls throughout were made of marble, which was imported by ship from Asia Minor.
Nearly 200 marble elements, weighing hundreds of tons, were used in building the basilica. Among the findings are dozens of pillars and column capitals with plant designs in Roman Corinthian style as well as carved eagles, a symbol of the Roman Empire, and heart-shaped capitals that held a roof over the basilica.
Earlier excavations conducted by the British in the 1920s revealed large statues of the Greek goddess Nike supported by the god Atlas and a statue of the Egyptian goddess Isis, portrayed as Tyche, a Greek deity believed to control the prosperity and destiny of a city.
Cracks still visible in the basilica’s floor indicate that the building was destroyed, and ultimately abandoned, after an earthquake hit the region in 363 C.E. Slabs of the basilica’s original marble were cut into pieces and reused during the Ottoman period (late 13th to early 20th century) for paving stones and the construction of new buildings. The area itself was also later used as an industrial site.
Conservation efforts are underway to restore, repair, and rebuild the site with its original sculptures and marble columns along with accessible pathways for visitor access to both the odeon and basilica.