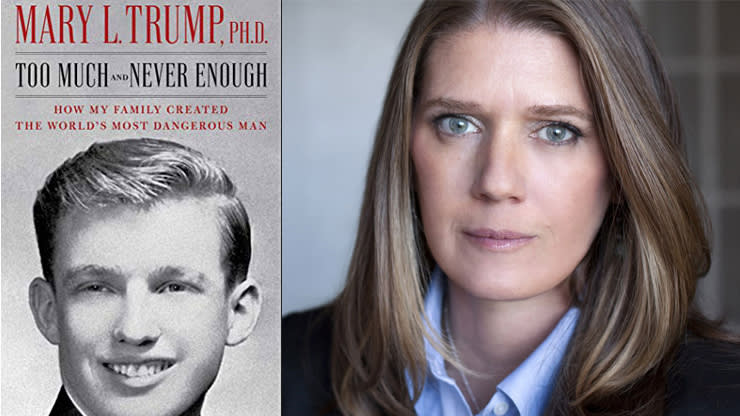 Author Mary L. Trump and her new book on Donald Trump.Photo: Peter Serling, copyright 2020A New York judge on Monday dismissed a legal challenge to the publication of Mary Trump’s tell-all book about her family — one day before its scheduled release.In a 20-page ruling, Dutchess County Supreme Court Justice Hal Greenwald said the bid by President Donald Trump’s brother Robert to block publication of his niece’s book didn’t pass legal muster — and noted news of the book’s contents had already “reached millions of people by the tremendous attention it has gained by the media.”The ruling was handed down the night before Mary Trump’s book, “Too Much and Never Enough, How My Family Created the World’s Most Dangerous Man,” goes on sale in bookstores.”The court got it right in rejecting the Trump family’s effort to squelch Mary Trump’s core political speech on important issues of public concern,” Mary Trump’s lawyer Ted Boutrous said in a statement. “Tomorrow, the American public will be able to read Mary’s important words for themselves.”The book’s publisher, Simon & Schuster, said in its own statement that “The unfettered right to publish is a sacred American freedom and a founding principle of our republic, and we applaud the Court for affirming well-established precedents against prior restraint and pre-publication injunctions.”Robert Trump, the president’s younger brother, filed suit last month seeking to block the book’s publication, arguing it violated a confidentiality agreement Mary Trump had signed ending a court fight with the president and his siblings. That court battle involved a fight over the estate of the president’s late father, Fred Trump. Mary Trump and her brother had charged that the president and his siblings deprived them of their fair share of the estate.Greenwald noted that “at the time the Agreement was agreed upon, the Trump family were New York based real estate developers and not much else. They were not elected officials or TV personalities.”The judge said Robert Trump’s contention that the agreement barred Mary Trump from ever writing about her family was overly broad, and also noted that he didn’t explain how the book’s publication would harm him, as his court filing claimed.”His allegations are unsupported and conclusory,” the judge wrote.Greenwald had initially signed a temporary restraining order in the case against Simon & Schuster, but the order was struck down by an appeals court judge. In his Monday ruling, Greenwald lifted a similar order against Mary Trump.In his ruling, the judge noted that thousands of copies of the book had already been sent to stores, and references another court’s ruling about the president’s unsuccessful bid to block publication of a book by John Bolton, his former national security adviser.”Comparing the potential enormous cost and logistical nightmare of stopping the publication, recalling and removing hundreds of thousands of books from all types of booksellers, brick and mortar and virtual, libraries and private citizens, is an insurmountable task at this time. To quote United States v. Bolton, … ‘By the looks of it the horse is not just out of the barn, it is out of the country,'” Greenwald wrote.