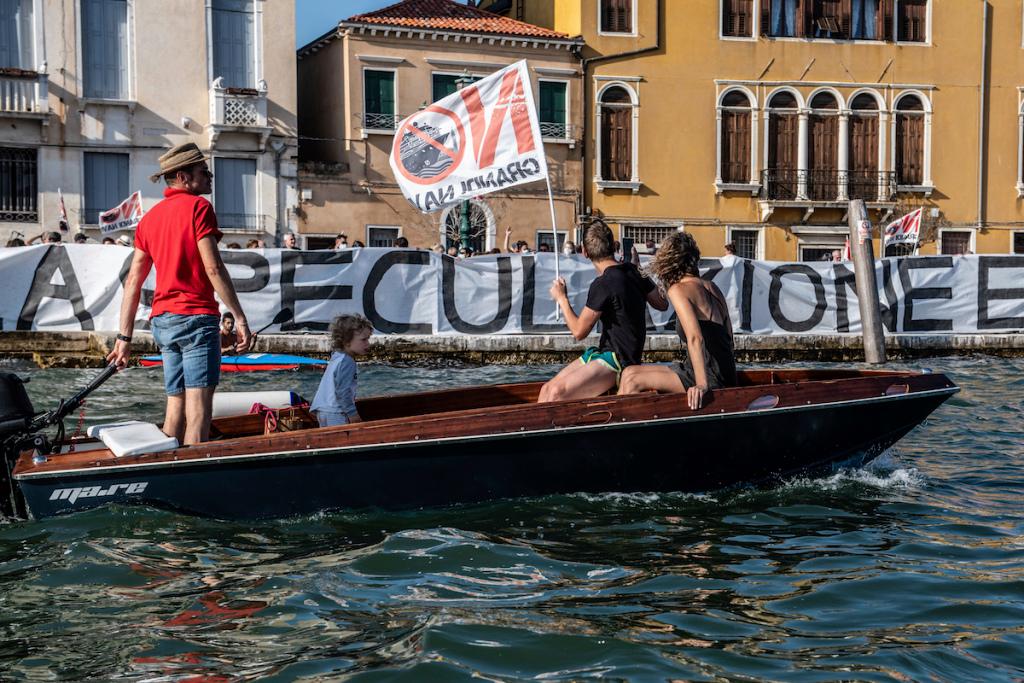 To receive Morning Links in your inbox every weekday, sign up for our Breakfast with ARTnews newsletter.
The Headlines
REMEMBER VENICE? The majestic art. The refreshing spritzes. The hulking cruise ships. The latter may not be long for this world. A new Italian decree has called on cruise operators to steer clear of the city’s historic center, Reuters reports. “Anyone who has visited Venice in recent years has been shocked to see these ships, hundreds of meters long and as tall as apartment buildings, passing through such fragile places,” the nation’s culture said. However, officials have tried this before and were thwarted by a court, so only time will tell if this works out. Meanwhile, the president of the Venice Biennale, Roberto Cicutto, spoke with the Art Newspaper about his aim to make the organization a center for research. After a one-year delay, the architecture biennale is on tap for next month; the art biennale is scheduled for next April.

FOR YEARS, COLLECTOR GEORGE LUCAS has been quietly (and not so quietly) snapping up work for the forthcoming Lucas Museum of Narrative Art in Los Angeles. This week it revealed that it had acquired a major Judith F. Baca archive. But those hoping to finally visit the museum (and ascertain what, exactly, Narrative Art is) will have to wait a bit longer than planned. The museum told the  Los Angeles Times‘ Deborah Vankin that it has pushed its unveiling from 2022 to 2023, since Covid safety protocols have slowed construction. Work on the $1 billion, Ma Yansong–designed building began in 2018. Over in San Marino, Times columnist Carolina A. Miranda has taken a look at one of Southern California’s oldest institutions, the Huntington Library, Art Museum, and Botanical Gardens , to see how it addressing its history and diversifying its staff. “Beneath every robber baron’s graceful mansion seems to lie a graveyard of questionable deeds,” Miranda begins.
The Digest
The freewheeling architect Michael Friedlander, whose designs included a New York Sanitation Department salt shed that resembles a kind of iceberg, has died at the age of 63. “I can’t think of a better public sculpture to land in New York than the shed,” critic Michael Kimmelman wrote in 2015. [The New York Times]

Patrick O’Connell, the founding director of Visual AIDS, the nonprofit that supports HIV+ artists and uses art initiatives to fight AIDS, has died. “We were living in a war zone,” he once said, of the state of the AIDS crisis in the 1980s, “but it was like a war that was some kind of deep secret only we knew about. Thousands were dying of AIDS. We felt we had to respond with a visible expression.” [Visual AIDS]
During the coronavirus pandemic, Kenya’s Lamu island has been buzzing with international visitors, from British aristos to art-world notables. “Marina Abramović filmed Confession, a performance video where she tells a donkey her deepest secrets,” there, Nimrod Kamer reports, and Lisson Gallery founder Nicholas Logsdail has a house. [Air Mail]
Phillips will offer a work by Mad Dog Jones, a.k.a. artist Micah Dowbak, at a roughly two-week online auction later this month. The opening bid: $100. A generative piece involving a depiction of a photocopier, it is apparently able to create its own NFTs for a limited period, though the artist said there is a high probability the work will malfunction. Alright. [ARTnews]
Experts who have been involved in cataloguing the work of Surrealist artist Maruja Mallo allege that, in a show last year at the Royal Galician Academy of Fine Arts in Spain, all 18 works attributed to Mallo were fake. [The Guardian]
The storied Pyramid Club in Manhattan’s East Village is closing. Over its 40-year run, it welcomed everyone from Andy Warhol to Madonna to Keith Haring. [New York Post]
A new book looks at some of the most “influential, groundbreaking, and controversial” album covers over the past four decades, which have included works by Henri Fantin-Latour (emblazoned on a New Order classic), David Shrigley (a Velvet Underground reissue), and Cindy Sherman (Arthur Doyle). [CNN]
The Kicker
FOLLOWING COMPLAINTS, WORKS BY STEVEN SHEARER that were displayed on billboards along a Vancouver greenway for the Capture Photography Festival have been removed, the Globe and Mail reports. The pieces were found photographs that the artist had selected of people sleeping. Some viewers apparently found them unpleasant, and it seems that one gripe was that the people in the images appeared to be dead. (Not so.) “There’s been a genuine public concern,” the festival’s director, Emmy Lee Wall, said. “I saw the e-mails; they were vitriolic.” [The Globe and Mail]