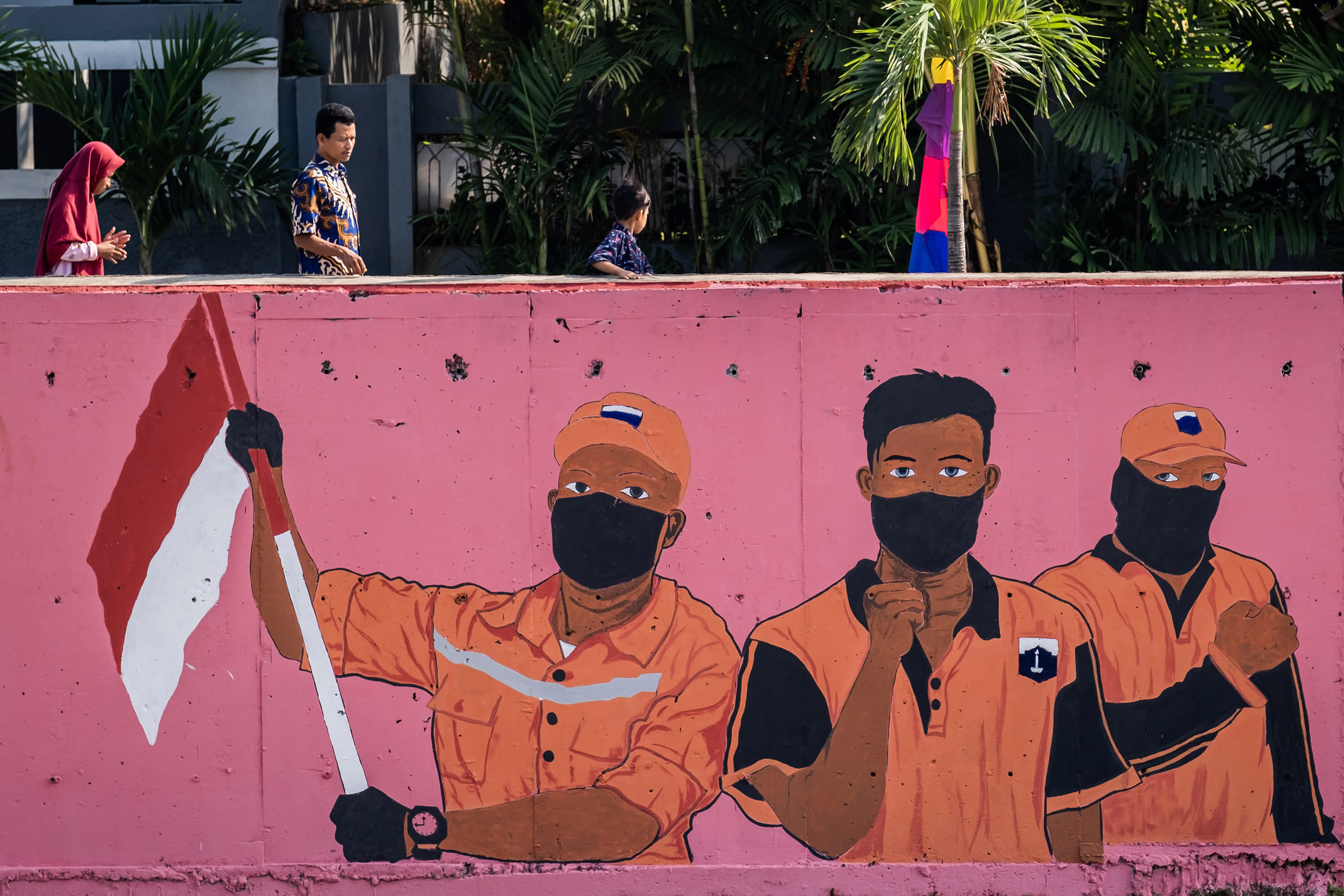 Pedestrians walk pass a mural depicting Indonesia’s fight against the coronavirus pandemic in Jakarta on August 16, 2020.Feature China | Barcroft Media via Getty ImagesSINGAPORE — Indonesia will take at least a year before a sufficient portion of its population becomes immune to Covid-19, the country’s Finance Minister Sri Mulyani Indrawati told CNBC and stressed the need for the government to keep spending to support the economy.  “We see that the pandemic is not declining, and we need to keep vigilant on that,” Sri Mulyani told CNBC on Monday as part of the coverage of World Economic Forum’s Davos Agenda.Indonesia launched its Covid-19 vaccination program earlier this month after approving for emergency use the vaccine developed by China’s Sinovac Biotech.Sri Mulyani said conservative estimates by experts showed Indonesia needs about 15 months to vaccinate around 180 million people in order to reach “herd immunity.” That occurs when enough people in a population develop protection against a disease such that it can no longer spread easily.We see that the pandemic is not declining, and we need to keep vigilant on that.Sri Mulyani IndrawatiFinance Minister, IndonesiaBut President Joko Widodo wants to “accelerate” that process to achieve herd immunity within 12 months — which is a “daunting task” given the country’s geographic spread, said Sri Mulyani. Indonesia is the world’s largest archipelago nation, with its roughly 250 million population spreading across thousands of islands.Meanwhile, Philippine Secretary of Finance Carlos Dominguez told CNBC — in a separate interview that’s also part of The Davos Agenda coverage — that his country could vaccinate “the majority of the people” by the end of 2021.The Philippines is scheduled to receive its first batch of Covid vaccines next month, said Dominguez. He didn’t specify the source of those vaccines, but a report by the Associated Press said the country is expecting a shipment of 50,000 doses from China’s Sinovac. Government spendingIndonesia and the Philippines have the highest number of cumulative Covid cases in Southeast Asia, according to data compiled by Johns Hopkins University.    Indonesia has reported more than 989,200 cumulative infections and over 27,800 deaths; while the Philippines has recorded more than 513,600 cases and over 10,200 deaths, Hopkins data showed.Dominguez said the Philippine government has set aside funds for the country’s vaccination program that’s estimated to cost around 82.5 billion Philippine pesos ($1.7 billion).Similarly, Sri Mulyani said Indonesia will prioritize spending on vaccines, as well as continued support for low-income households and small businesses. She added that the government has targeted a budget deficit of 5.7% of gross domestic product this year, lower than last year’s shortfall of 6.1% of GDP.  The Indonesian finance minister said her country has weathered the economic hit from the pandemic “relatively well” compared to many countries in the region and among the G-20 group of economies.The economy is expected to contract around 2.2% “at the deepest” in 2020, before rebounding to a growth of around 5% this year, she added.