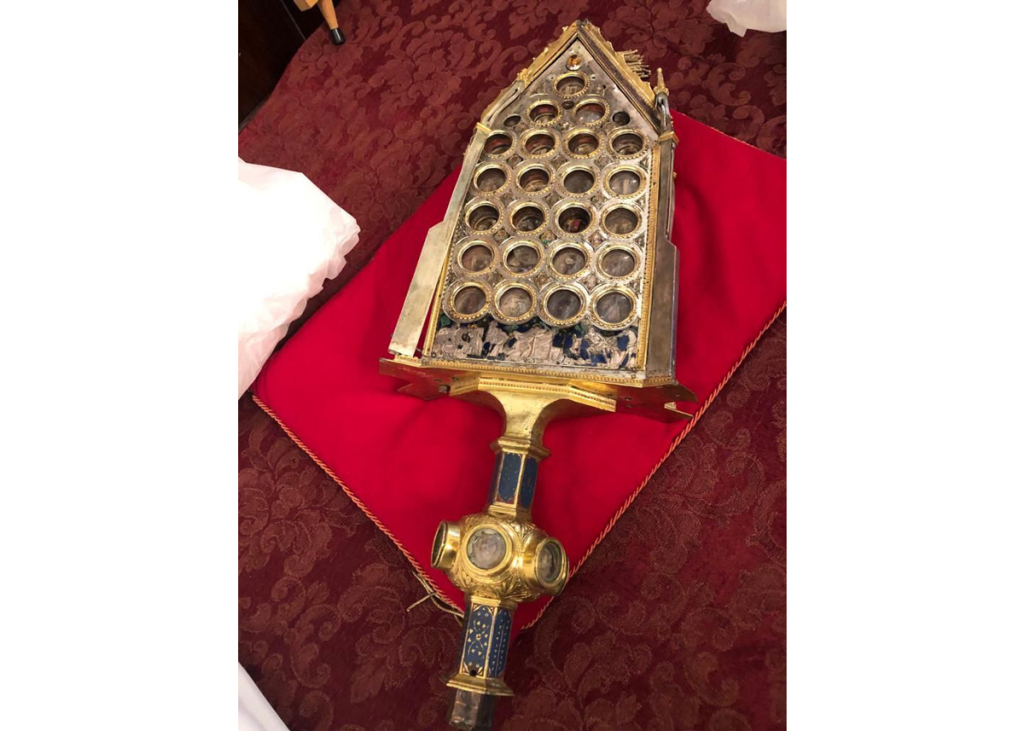 After being stolen more than 30 years ago from a village in Italy’s Tuscany region, a group of stolen medieval artifacts has been located by police in the home of an antiques collector in Sicily. In that house near Catania, the police discovered a pilfered reliquary that dates back to the 13th century, as well as other objects including a copper cross and six chalices.
The reliquary was taken from the medieval walled town of Monteriggioni in 1989, and is believed to be dedicated to Saint Galgano, a nobleman who, having seen the Archangel Michael in a vision, thrust his sword into a stone and became a hermit. The stone containing his sword is held by a museum in Montesiepi.

The Carabinieri, Italy’s police force, did not release the name of the collector who had held the artifacts. “He was not able to provide a valid explanation as to how he came to possess them,” the Carabinieri said in a statement. (The Carabinieri did not say if they were planning to bring charges against the collector related to the objects’ theft.)
What will happen next with the artifacts remains unclear, though Dario Franceschini, Italy’s culture minister, promised that they would head home. “These sacred objects will return to the place from where they were stolen many years ago,” he said in a statement.
At a press conference, experts were quick to praise the recovery effort as a significant one. Cardinal Augusto Paolo Lojudice, the archbishop of Siena, said that the group of objects constituted “a significant part of the cultural and artistic identity.” And Barbara Jatta, director of the Vatican Museums, said the recovery was of “unprecedented importance for the value of the objects.”