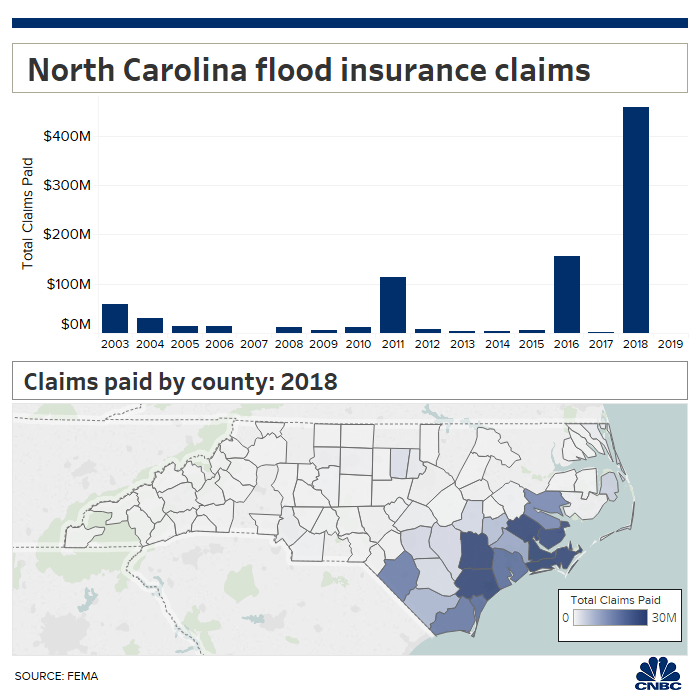 File photo of workers using farm machinery to navigate floodwaters from the Waccamaw River caused by Hurricane Florence on September 26, 2018 in Bucksport, South Carolina. Farmers brace for more flooding as Hurricane Dorian barrels down on the Carolinas.

“Florence was devastating for us. We lost everything. All our crops were destroyed,” said Jody Clemmons, a farmer of 25 years in Brunswick County, North Carolina.

“It’s hard to overcome that in one year. We had a good start this year, but here we are with another storm,” he said. “This is now three years in a row of hurricanes.”

Authorities say that Dorian, which destroyed the Bahamas and was downgraded to Category 1 early Friday, could bring North Carolina about 10 to 15 inches of rain and a storm surge of four to seven feet. It’s already knocked out power for 350,000 residents and businesses in North and South Carolina.

Despite receiving several tornado warnings, Clemmons spoke to CNBC on his cellphone while he rushed around his farm to make last minute protections from Dorian. Other farmers in different counties were struggling to harvest some of their more mature crops as the rain ensued.

But we’re already on the ropes. And a 25% or 50% reduction again from Hurricane Dorian — that could make a difference between whether we’re here next year or not.

In 2016, Matthew followed a similar path to Dorian, causing billions of dollars in damage in North Carolina and killing 28 people. Two years later, Florence brought 20 to 30 inches of rainfall to farmers who already had wet soil, resulting in huge losses.

The two hurricanes collectively caused $35 billion in damage and 102 deaths in the U.S., primarily in the Carolinas.

“In the last three to four years, we’ve had significant losses due to hurricanes,” said Mike Godley, a cotton farmer in Beaufort County, who said he expects his cotton to get pummeled in Dorian’s path.

“If we were in a strong financial position with a good savings account and war chest, a modest storm that brings a 25% loss of crops would be sad, but not a final blow,” he said.

“But we’re already on the ropes. And a 25% or 50% reduction again from Hurricane Dorian — that could make a difference between whether we’re here next year or not.”

As Dorian makes landfall, North Carolina farmers have had less than a year to recover from crop loss and flooding to their lands. Aubrey Onley, a farmer in Perquimans County, said that his cotton crop had just begun to open up, but they’ve been damaged from about 5 to 6 inches of rain and forceful winds from Dorian. He said it’s too early to tell what the exact loss will be from the storm.

Dorian’s threat piles on to a significantly rough year for farmers across the country, who have struggled through record flooding, heatwaves and trade war escalations that have lowered prices and profits this year. In the Midwest, flooding caused at least $3 billion in damage and left millions of acres unseeded.

Asked about whether they’re concerned about the impact of climate change on producing more intense storm patterns, several farmers said they were not concerned about that and expected clusters of hurricanes to arrive now and then.

“I don’t blame it on global warming. We don’t know what normal is anymore,” Clemmons said, though he acknowledged that the atmosphere is getting warmer and making storms and rains worse.

John Kilpatrick, a farmer from Craven County, said he lost all his soybeans in 2016, when Michael hit, and then lost everything again last year from Florence. He now fears that Dorian’s wind could destroy his cotton, which isn’t ready for harvest until October, and bring the ocean’s saltwater to destroy his soybeans out in the fields.

“This is a tough time for farmers. Their hard work from all year is at stake,” said Lance Grimes, an extension agent of agriculture in Martin County Center, North Carolina.

“Farmers are very hard working people and have to wear so many different hats. They work all year to provide for everyone, and may have just enough to make ends meet at the end,” he said.

Kim LeQuire, a farmer from Johnston County, said Florence destroyed 40% of her sweet potato crop and wiped out 200 acres of tobacco last year.

“We still haven’t recovered from that,” she said. “The last thing we need at this point, less than a year after Florence, is another Hurricane like Dorian. When you’re a farmer, your livelihood depends on the weather.”

“We’re hopeful and optimistic, and praying that Dorian will break up.”

Endgame’ taught us something really important about 3D

Under Armour CEO says ready to ‘reset ourselves’ in North America