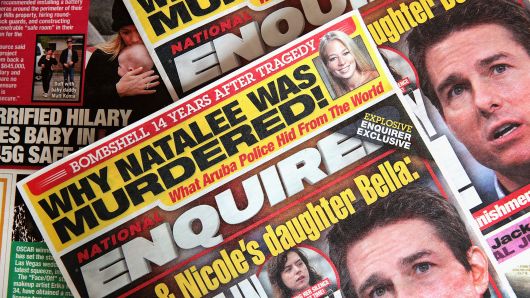 In this photo illustration, celebrity gossip dominates the cover of a National Enquirer magazine on April 11, 2019 in Chicago, Illinois.

American Media said on Thursday it is selling its tabloid the National Enquirer to James Cohen, chief executive officer of Hudson Media.

The National Enquirer had admitted to paying hush money to help U.S. President Donald Trump get elected and been accused of attempting to blackmail Amazon founder Jeff Bezos.

The weekly tabloid, along with two of its sister publications, will be purchased by the head of Hudson Media, which is known for its airport newsstands.

This comes a week after AMI said it was looking at “strategic options” for the National Enquirer as well as for the Globe and the National Examiner brands.

The sale is expected to reduce AMI’s debt to $355 million.

Earlier in the day, the Washington Post reported about the AMI’s decision to sell its tabloid to the head of Hudson News for $100 million.

Last week, the New York Times reported that owners of the National Enquirer were in talks to sell the tabloid to the California-based billionaire Ronald Burkle.

Besides, Paul Pope, one of the heirs of the National Enquirer founder Generoso Pope Jr, had also been in the list of bidders, according to media reports.

On Tuesday, Pope dropped his bid to buy the supermarket tabloid from American Media, the New York Post report said.

Over its 92-year history, the National Enquirer has enticed readers in supermarket checkout lines with sensational headlines and photos about celebrities. The tabloid’s website claims it has a viewership of 5 million.