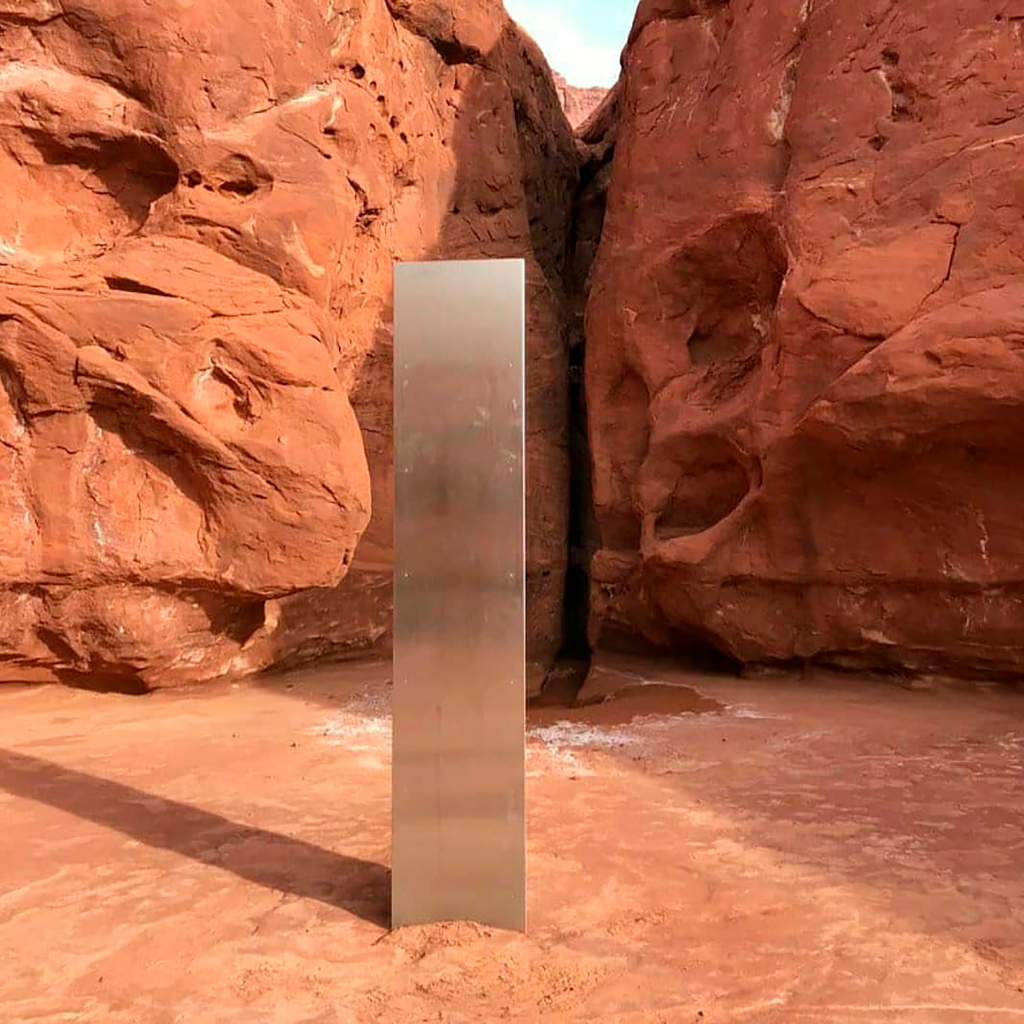 It’s rare that an anonymous work of art makes international headlines, especially given the political and pandemic news cycles of the past year. But 2020’s final surprise might be a nearly 10-foot-tall stainless-steel pillar in the Utah desert. The monolith, as it is now referred to (it already has a lengthy Wikipedia entry), was installed by an unknown party some time between July and October 2016, according to satellite imagery, in a red sandstone slot canyon in Lockhart Basin, a site that had been part of public lands until the Trump administration removed it. It was discovered on November 18 of this year, when state biologists spotted it during a helicopter trip to survey bighorn sheep. The piece was carefully planned, with a hole drilled into the rock.

Monolith mania took hold almost immediately on social media. A few hours after the Utah Department of Public Services announced the discovery, a Reddit user named Tim Slane had identified its exact location. Over the following days tourists flooded the area, trekking as one traveler did “four hours in the car, hiking nine miles with over 2000 feet of elevation” just to see the polished metal stand in the middle of the rock basin, the perfect manmade geometry of Minimalist sculpture contrasting with the organic curves of geology and the force of erosion. The monolith became an Instagram trap, like a mural of angel wings in a gentrifying neighborhood: there are now more than a thousand Instagram photos tagged #utahmonolith. A photographer named Dave Koch dressed up in a gorilla suit and posed next to it, referencing the alien monolith of 2001: A Space Odyssey.
The monolith’s perfection seemed otherworldly — was it extraterrestrial? Or was it perhaps made by the artist John McCracken, creator of many metal monoliths? That speculation was backed up by David Zwirner gallery and a comment recalled by the artist’s son that McCracken wanted to install his work in remote places to be discovered later. “He was inspired by the idea of alien visitors leaving objects that resembled his work, or that his work resembled,” Patrick McCracken told the New York Times. The Postmasters gallerist Magda Sawon suggested it might instead be the work of prankster-artist Maurizio Cattelan.
By Friday, November 27, however, the monolith was gone, removed in the night by a group of four men, as documented by photographer Ross Bernards. Utah residents Sylvan Christensen and Andy Lewis, who runs an outdoorsy YouTube channel called MrSlackline, later admitted to the act. They arrived with a truck and toppled the monument, which was actually a hollow structure made of thin sheets of metal over plywood. “This is why you don’t leave trash in the desert,” Bernards recounts the men saying. “Leave no trace.” The crew was trying to protect the landscape rather than requisition their artwork, though they did inexplicably leave the triangular top of the sculpture at the site. According to the Art Newspaper, a note reading “Bye bitch” was also found.

But then another monolith showed up, this time in Neamt, Romania, at the archaeological site of the Petrodava Dacian Fortress, built around 80 BCE. Sloppily welded and haphazardly polished, the second monolith clearly didn’t belong to the same creator. After a day, it, too disappeared. Then, on December 2, a third monolith appeared on a hiking trail in Southern California, closer in appearance to the clean Utah sculpture than the Romanian. A vigilante group of iconoclasts destroyed that one, too, and replaced it with a wooden cross while chanting “Christ is king.” Must be aliens, right? The serial appearances and vanishings were the tipping point: From an obscure piece of installation art, perhaps never meant to be found, the monolith became a straight-up Internet meme.

The monolith in Romania, before it was dismantled.
AP