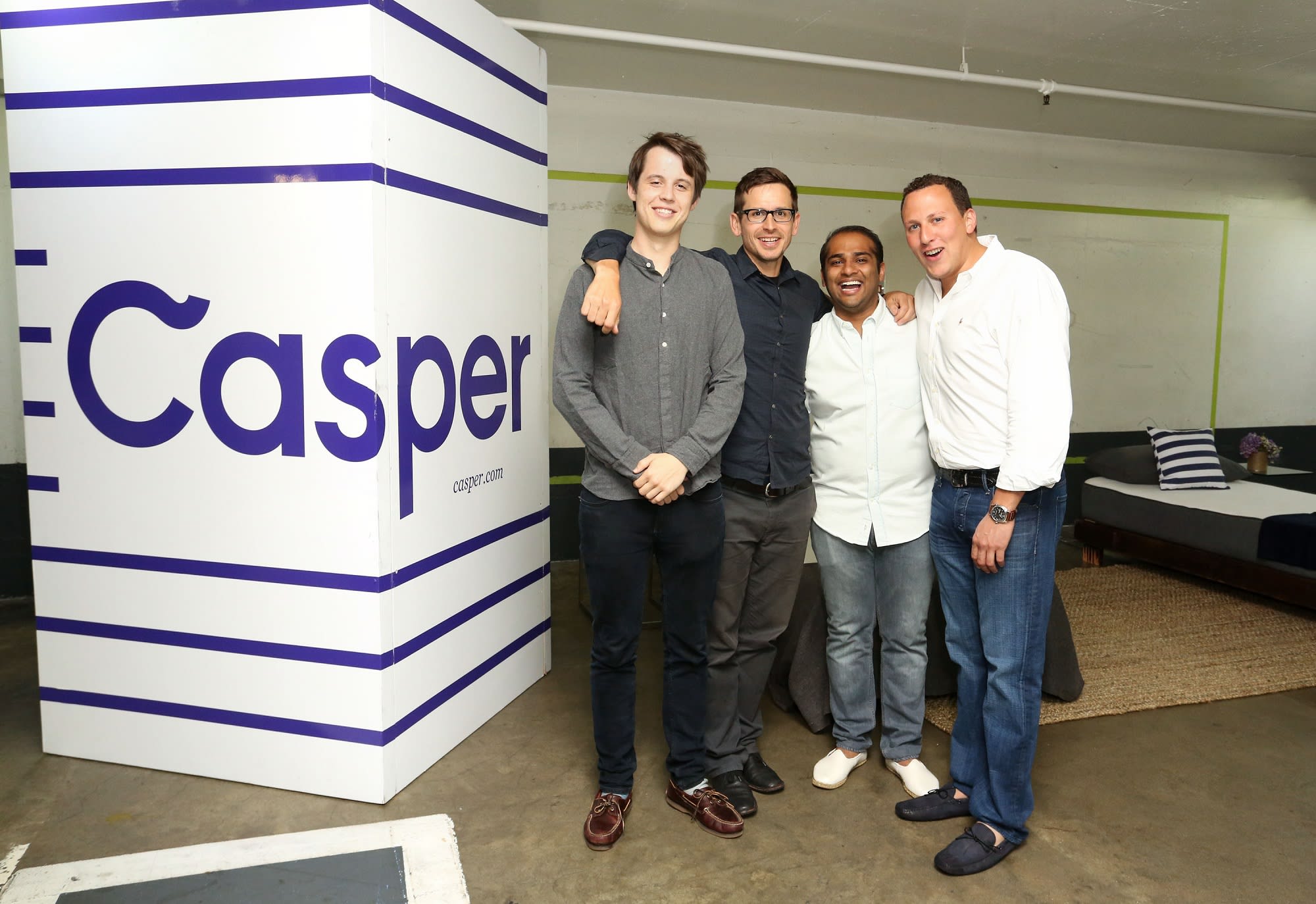 Singer John Legend at the PLUS launch event in New York CityTom VickersCasper, the bed-in-a-box start-up that reached a $1 billion valuation selling mattresses over the internet, is getting more serious about providing customers better sleep. This week it launched a new line of melatonin and CBD-infused gummies in partnership with Plus Products, a San Mateo, California-based company that makes THC edibles in California.Getting into the CBD market may seem like a gimmick timed to the first frenzy in the cannabis capitalism market, but Casper has been looking at the CBD market for years under the direction of its co-founder and chief strategy officer, Neil Parikh, who comes from a medical background and is a CBD user himself.Casper co-founder and CEO Philip Krim told CNBC that Parikh, who attended medical school prior to founding Casper and whose father is a pulmonologist, has been the most progressive with regard to the emerging health trends that the company’s five co-founders have studied over time.”Neil was pretty early to the emergence of CBD, its potential for helping people sleep and how it helps him sleep personally,” Krim said. “Because we saw the killer application of CBD products helping people sleep, we are approached all the time by different companies that want to get into this space. As we got to know Plus over a pretty long period of time and we looked at really everyone else out there … we found that this was the right partnership for us.”CBD gummies are the latest in a series of sleep-improvement products that the retailer, which ranked No. 8 on the CNBC Disruptor 50 2019 list, has introduced since its 2014 launch, when consumers first latched on to the idea of purchasing a mattress without ever stepping into a store. At the beginning of the year, Casper also introduced an $89 nightlight called “Glow,” which was created to produce a warm hue rather than giving out blue light that has been shown to disrupt natural sleep rhythms.Casper, which was treated to a lengthy New York Times feature last week about its plans to become the “Nike of sleep,” sees the CBD business as one more phase in a continuously evolving story.”We’re always exploring new ways to improve sleep across the entire sleep arc, from sunset to sunrise,” Parikh said in a statement announcing the CBD deal. “Like Plus, we believe sleep is a key part of the wellness equation.”The Times’ story began with Parikh’s sleep problems and his use of a sleep band called Oura that tracked things like REM sleep and heart rate, and his reliance on Dr. Frank Lipman, a sleep specialist who has been treating the executive for a year and a half.A trillion-dollar sleep problemSleep is an even bigger market opportunity than CBD. It is estimated that bad sleep is a trillion-dollar health-care problem. Meanwhile, the science of sleep continues to demonstrate that work productivity and success — as well as general health and longevity — require a good night’s sleep for the vast majority of people.A study conducted in 2010 analyzed the huge costs to companies caused by lack of sleep, and sleep disorders in particular.The sleep-deprived will have to dish out $35 for a package of 14 CBD Sleep Gummies, each of which include chamomile extract, 25mg of CBD and 1mg of melatonin. The new line will include three distinct products, developed by Plus’ team of scientists, entrepreneurs and chefs: Balance in blueberry flavor, Uplift in grapefruit flavor, and Sleep in blackberry tea flavor.In addition to a celebrity lineup of investors like actor Leonardo DiCaprio and rapper 50 Cent, Casper has enlisted musician John Legend to be the face of its new CBD product. Legend isn’t the only celebrity getting in on CBD: Earlier this month former New England Patriots star Rob Gronkowski announced that the next phase of his post-NFL career will include a partnership with CBD products company CBDMedic to create a line of topical pain treatments using the cannabis-derived compound.Some studies have suggested the CBD may help with insomnia and other sleep issues, but the only widely accepted health finding related to CBD effectiveness is for childhood epilepsy — the only CBD-based drug approved by the FDA is for this use, which was approved in September 2018.According to Harvard Medical School professor Peter Grinspoon, “We need more research, but CBD may prove to be an option for managing anxiety, insomnia and chronic pain. Without sufficient high-quality evidence in human studies, we can’t pinpoint effective doses, and because CBD is currently mostly available as an unregulated supplement, it’s difficult to know exactly what you are getting.”CBD has raised concerns among federal regulators as the U.S. market continues to swell: According to a May report by BDS Analytics, sales are expected to hit $20 billion in the next five years.Both Casper and Legend said part of the reason they wanted to work with Plus relates to its approach to the market at a time of regulatory scrutiny.For Casper the CBD market entry comes at a time of rumors about an initial public offering. In March it was reported that the mattress retailer was seeking IPO underwriters and had plans to interview investment banks.New York-based Casper was most recently valued at $1.1 billion, according to PitchBook data, but the mattress market has become more crowded with mattress and sleep start-ups, including Nectar, Leesa Sleep and Tuft & Needle. Tempur-Pedic mattress maker Tempur Sealy recently introduced its first bed in a box, called the Tempur Cloud.The start-up has expanded into the brick-and-mortar mattress market, with 20 retail stores around the country and plans to add 200 more. It also has a string of retail partners that sell its mattresses, pillows and bed frames.Casper has investment backing from Target, which reportedly considered buying Casper for $1 billion but ended up investing in the company instead.Krim did not comment on the possibility of an upcoming Casper IPO but did tell CNBC that “it remains an exciting time to go public.”

Jamie Dimon says his gut tells him a recession is ‘not imminent’
What changed in the new statement
To Top
error: Content is protected !!