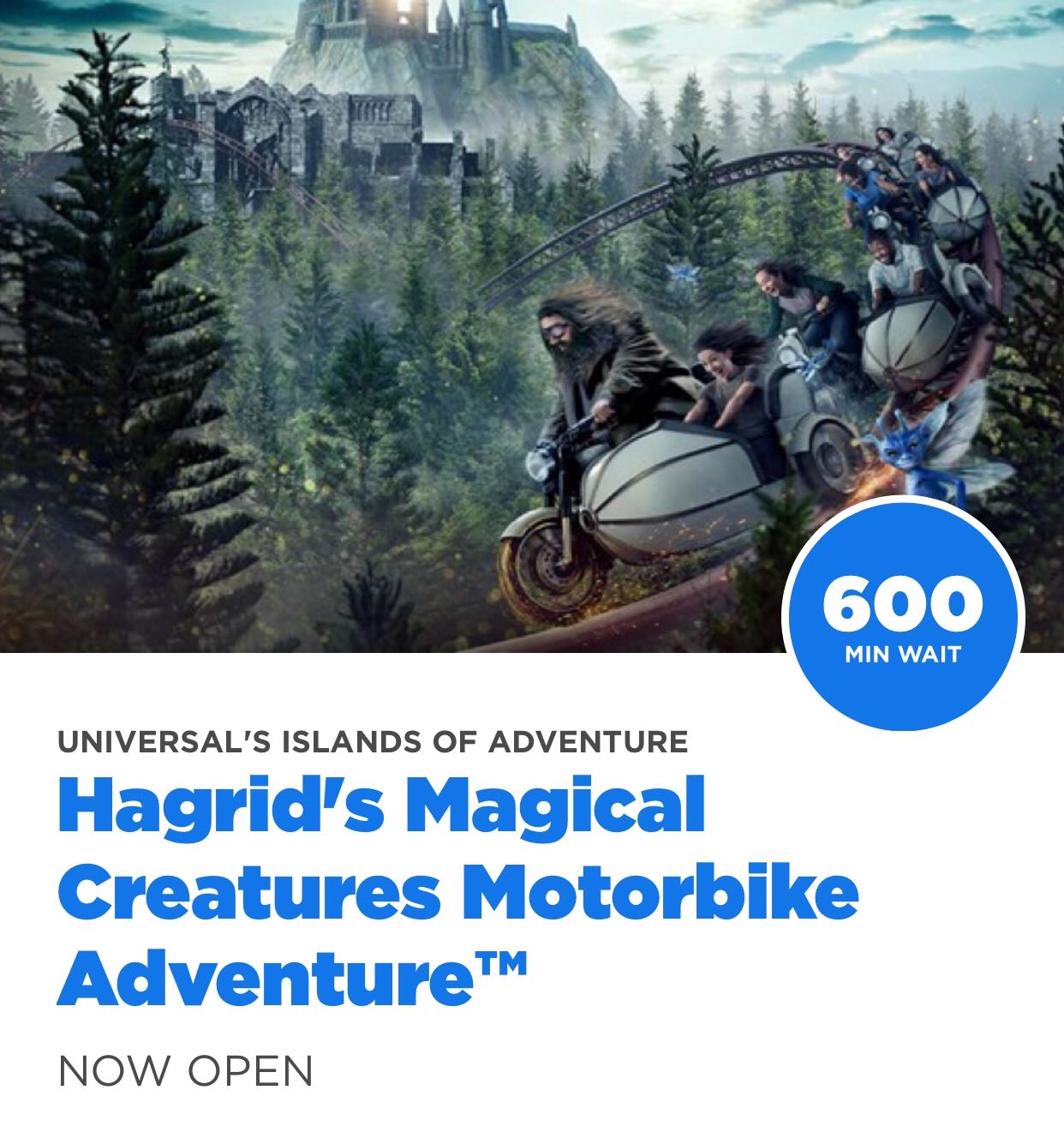 An epic new addition to The Wizarding World of Harry Potter, Hagrid’s Magical Creatures Motorbike Adventure allows parkegoers to fly deep into the wilds of the Forbidden Forest, beyond the grounds of Hogwarts castle.

Within an hour of opening on Thursday, Universal’s newest Harry Potter ride in Orlando, Florida, has a 10-hour wait.

Hagrid’s Magical Creatures Motorbike ride at Islands of Adventure is a $300 million investment from Universal that takes parkgoers on a mile-long journey through the infamous Forbidden Forest on Hagrid’s iconic motorbike.

It replaced the Wizarding World of Harry Potter’s Dragon Challenge roller coasters, which was originally called Dueling Dragons. The immersive ride had been under construction for nearly two years.

Fans who wanted to be the first to ride the new coaster arrived before the sun came up Thursday and could be in line until the sun goes down. The Universal Orlando mobile app estimates the wait for the ride to be between eight and 10 hours.

Photos and videos on Twitter show a cordoned-off line stretching from Harry Potter land through the Lost Continent area and all the way back to the Dr. Seuss area of the park. Because of the massive line, fans who just want to visit Hogsmeade are being rerouted through the Jurassic Park area on the opposite side of Islands of Adventure.

Starting Friday, the park will be using a virtual queue so that fans won’t have to wait around in a massive stand-by line. Parkgoers will be alerted when it is time for them to return to the queue.

Hagrid’s ride has a record-breaking number of launches, with a total of seven. Launches are moments when the roller coaster is physically propelled forward instead of using momentum from gravity. It also is only the second coaster in the nation to feature a vertical drop — a 17-foot free fall.

The ride itself isn’t the only attraction of this adventure. Like the Forbidden Journey ride through Hogwarts Castle and the Escape from Gringotts ride in the Diagon Alley portion of the Wizarding World over in Universal Studios, Hagrid’s motorbike ride features a massive queuing area filled with props and ambiance.

More than 1,200 trees were planted within the attraction to make riders feel like they are actually in a forest.

This experiential part of the attraction is also likely why the ride cost $300 million. Traditionally, coasters cost less than $100 million for just the physical steel coaster.

For example, Expedition Everest at Disney’s Animal Kingdom cost $100 million to build. The next most-expensive coaster is the Steel Dragon at the Nagashima Spa Land amusement park in Japan, which opened in 2000.

It’s not uncommon for major theme-park companies to revamp their attractions. The Wizarding World of Harry Potter first opened in 2010 in Universal’s Islands of Adventure park and attendance has jumped by about 50%.

This newest overhaul and new ride is just another way for Universal to entice visitors to its parks.

“Since 2010, yearly attendance at Universal Studios Orlando and Islands of Adventure has increased from a combined 12 million guests to nearly an estimated 20 million,” Ryan Roth, IBISWorld’s lead industry analyst, told USA Today. “Additionally, revenue generated from NBCUniversal’s theme parks has increased more than 50% over the 10 years to 2019.”

Not to mention Universal now has to compete with Disney’s new Star Wars: Galaxy’s Edge theme park, which is about to open in Orlando at the end of August. Already, the California park is driving massive traffic, and it’s only in its soft launch.

Representatives for Universal did not immediately respond to CNBC’s request for comment.