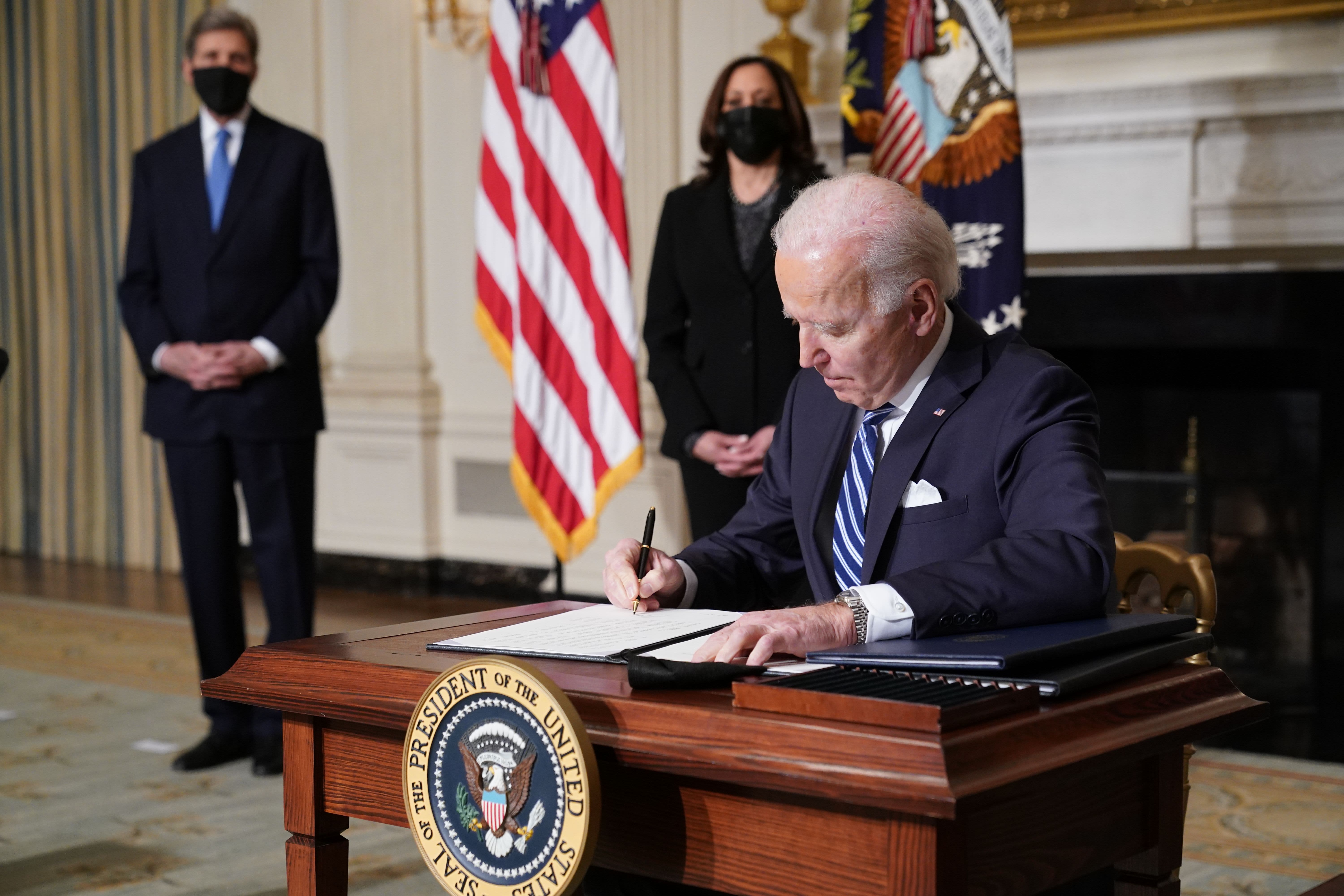 Vice President Kamala Harris (2-L) and Special Presidential Envoy for Climate John Kerry (L) watch as US President Joe Biden signs executive orders after speaking on tackling climate change, creating jobs, and restoring scientific integrity in the State Dining Room of the White House in Washington, DC on January 27, 2021.Mandel Ngan | AFP | Getty ImagesPresident Joe Biden on Wednesday introduced a massive infrastructure proposal to reshape the U.S. economy and build out clean energy infrastructure as part of a broader effort to curb climate change.If signed into law, the proposal would rank as one of the largest federal efforts ever to curb the country’s greenhouse gas emissions and advance the president’s commitment to put the country on a path to net-zero carbon emissions by 2050.The measure, called the American Jobs Plan, includes $174 billion in spending to boost the electric vehicle market and shift away from gas-powered cars. It proposes replacing all the country’s lead pipes and updating water systems to ensure drinking water is safe.The administration’s plan, which also includes measures unrelated to climate and infrastructure, is ambitious and could be difficult to impose even if it does pass through both chambers of Congress.CNBC InfrastructurePresident Joe Biden has proposed spending more than $2 trillion to fix and update America’s infrastructure, including roads, bridges, ports and green energy technology. Read more of CNBC’s infrastructure coverage here:The initiatives involve funding to install half a million charging stations across the country by 2030, incentives for Americans to buy EVs and money to retool factories and boost domestic supply of materials. Electric cars only make up about 2% of new auto sales in the U.S.The proposal also includes $100 billion in funding to update the country’s electric grid and make it more resilient to worsening climate disasters, such as the recent winter storm that caused widespread blackouts in Texas.As global temperatures rise, the U.S. will update aging infrastructure like roads and bridges to be more resilient to weather events like droughts, floods and wildfires. The plan will retrofit millions of homes to increase energy efficiency, with efforts focused on the low-income and minority communities most vulnerable to climate change.Biden also proposes the creation of a “Energy Efficiency and Clean Electricity Standard,” a mandate that would require a portion of U.S. electricity come from zero-carbon sources like wind and solar power. The mandate would require congressional approval.CNBC PoliticsRead more of CNBC’s politics coverage:The president is calling on Congress to invest $35 billion in research and development for projects on technologies to mitigate climate change and create jobs, such as carbon capture and storage, hydrogen, offshore wind, and electric vehicles.In an effort to help fossil fuel workers transition to new jobs, the plan also includes $16 billion to employ those workers to cap oil and gas wells and reclaim old coal mines to curb methane leaks. Another $10 billion would establish a “Civilian Climate Corps” to employ people to restore land.Some environmental advocates and liberal Democrats criticized the proposal as insufficient to tackle climate change, pointing to Biden’s vows to spend $2 trillion over four years to transition the economy to net-zero emissions.”This is not nearly enough,” Rep. Alexandria Ocasio-Cortez, D-N.Y., wrote in a tweet about the infrastructure plan.Brett Hartl, government affairs director at the Center for Biological Diversity, said Biden’s plan is “industry-friendly” and falls short on the president’s promise to cut emissions and decarbonize the electricity sector.Other environmental groups praised Biden’s plan as boosting clean energy and confronting the threats of worsening climate disasters.”President Biden is demonstrating today that he is committed to building a better society for all people,” Mitchell Bernard, president of the Natural Resources Defense Council, said in a statement.”Congress must now work expeditiously to turn this vision into reality by passing legislation to invest in clean energy, safe drinking water, public transit, affordable housing — and much, much more,” Bernard said.The administration would fund part of the spending by eliminating tax credits and subsidies for fossil fuel producers. Biden plans to fund a bulk of the plan by raising the corporate tax rate to 28%, after the Trump administration cut the levy to 21% from 35% as part of a tax law in 2017.

Germany suspends use of AstraZeneca’s Covid shot for the under-60s, dealing another blow to drugmaker
‘Everyone here is confused’: Europe’s see-sawing over AstraZeneca’s vaccine is stoking uncertainty
To Top
error: Content is protected !!