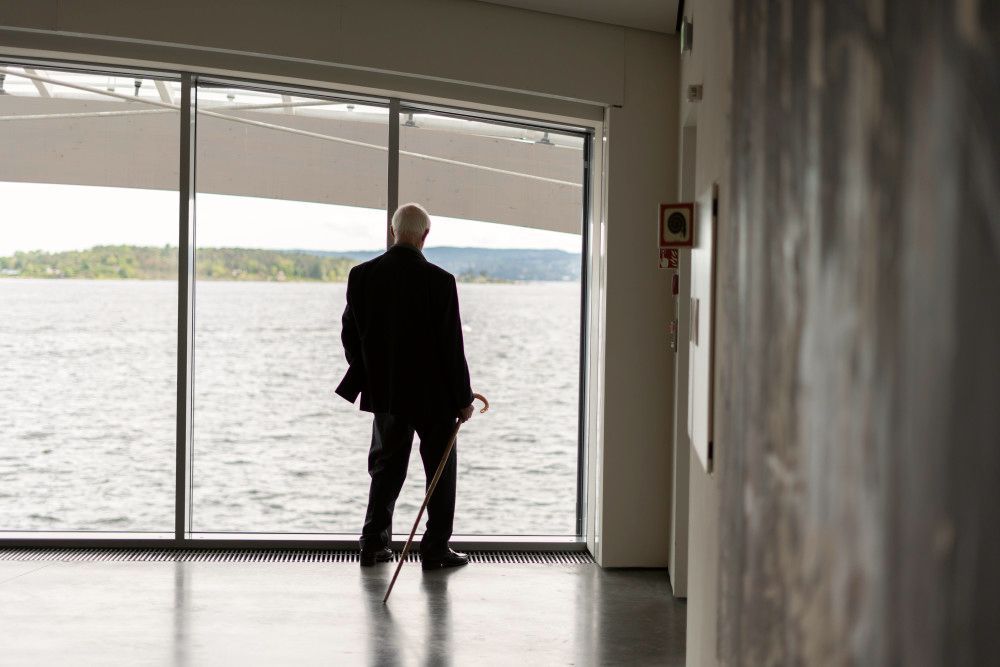 Hans Rasmus Astrup, the scion of a Norwegian shipping empire who built a world-class museum for his vast collection of contemporary art, has died at 82. In an Instagram post, his museum, the Astrup Fearnley Museet in Oslo, wrote that he died on Friday morning.
“We are struck with sadness and will always treasure his extraordinary philanthropy and cultural leadership that has impacted so many in so many ways,” the museum wrote in its statement.
Astrup, who ranked on ARTnews‘s annual Top 200 Collectors list each year between 1992 and 2020, was known throughout Europe as a collector with a penchant for cutting-edge art. One of Norway’s richest men, he made his fortune in the shipping and real-estate businesses, and is believed to have been worth around $1 billion. In 2013, he donated all of his commercial assets, including his company’s art collection, to his namesake foundation in order to support the Astrup Fearnley Museet, which is now considered one of the world’s top private museums.

The Astrup Fearnley Museet is home to the nearly 1,500 works in Astrup’s holdings. These include an array of pieces by today’s most famous artists, from Cindy Sherman to Cao Fei. Notably, his collection features a mix of work by blue-chip artists and emerging artists, with stars like Anselm Kiefer, Christopher Wool, and Matthew Barney sharing space with up-and-comers like Korakrit Arunanondchai and Juliana Huxtable.

Astrup took an interest in certain market giants early on. In 1993, for example, he bought Damien Hirst’s sculpture Mother and Child Divided (1993), which features a bisected cow and calf suspended in formaldehyde. “When I was making the formaldehyde works, they were big pieces to buy, a big commitment, and he buys it without knowing where it’s going to go or how you transport it,” Hirst said in a 2008 interview with the Norwegian TV network NRK, adding, “It’s a rare breed, that kind of person. You don’t meet many like that today.”
At auction, Astrup’s purchases even set records. In 2001, Sotheby’s sold Jeff Koons’s 1988 sculpture Michael Jackson with Bubbles, featuring the famed singer alongside his pet chimpanzee. Astrup bought the work at that sale for $5.6 million, at the time setting a new benchmark for Koons, who is now the world’s most expensive living artist. In 2018, Astrup’s Michael Jackson with Bubbles was shown at the Met Breuer’s survey “Like Life: Sculpture, Color, and the Body (1300–Now).”

In July 2020, the sale of a work from Astrup’s holdings generated headlines. The Astrup Fearnley Museet announced that it would sell Francis Bacon’s Triptych Inspired by the Oresteia of Aeschylus (1981) at Sotheby’s in order to “provide significant funding to further develop and diversify the collection through future acquisitions.” It sold for $84.5 million, becoming the most expensive lot of 2020 and the third-most expensive Bacon ever to sell at auction.

Hans Rasmus Astrup was born in 1939 and largely kept a low profile. He attended the University of Oslo, where he received a master’s degree in law in 1972, and he went on to take over his family’s business, the shipping brokerage firm Fearnley & Eger A/S.
Astrup formed the Astrup Fearnley Museet in 1993, though the museum didn’t become the subject of greater international attention until 2012, when it relocated to Oslo’s harbor with a new $110 million building designed by Renzo Piano. “This museum now becomes our identity,” Gunnar B. Kvaran, the museum’s director, told the New York Times in 2012. “We now have the possibility to expose the collection, giving us a totally new profile in the city and in the art life of Oslo.”
For museum officials based outside Norway, the new museum signaled a major entry into the European art scene. “Each [museum] has a different era in its DNA: The Louisiana has the 1950s, Moderna the ’60s. This is a museum of the twenty-first century,” Guggenheim Museum director Richard Armstrong told Artforum upon its opening. “They’ve really upped it by 300 percent.”

The museum’s reopening in a new location was not without its controversy, however. Norwegian critics pilloried the Astrup Fearnley Museum for partnering with Lundin, an oil company that is being investigated in Sweden for its involvement in war crimes and genocide in South Sudan. (That inquiry is still ongoing.) The editor of Kunstkritikk, Norway’s most prominent art publication, accused the museum of leading “an effort to launder the image of a company that has exploited resources in the Third World since the 1970s.” In 2020, Kunstkritikk reported that Lundin was no longer a sponsor of the Astrup Fearnley Museet; the museum’s chairman said that an agreement with the company ended in 2019.
The Astrup Fearnley Museet now ranks among Oslo’s most-visited institutions, alongside the National Museum and the Munch Museum. Now in its 28th year, the museum has grown its ambitions to also include a grand exhibition program. Among its current offerings is Europe’s biggest Nicole Eisenman exhibition ever; it has also staged surveys devoted to contemporary Brazilian art, Josh Kline’s work, and Cindy Sherman’s horror-inflected photography in recent years. Alongside these presentations, the museum still shows the most famous works from Astrup’s holdings, among them Anselm Kiefer’s sculpture The High Priestess/ Zweistromland (1985–89), which features 196 lead books on a shelf strewn with copper wire.
In a rare interview with NRK in 2018, Astrup said that he hoped the Astrup Fearnley Museet would contribute to Oslo’s art scene in the long term. “We plan for it to exist forever,” he said. “You can never be one hundred percent sure of that, but we try to add up both the quality and not least, the expenses, so that we can exist in a hundred years. These are the kind of goals you need to set. And that is one of the goals we have set [for] ourselves.”