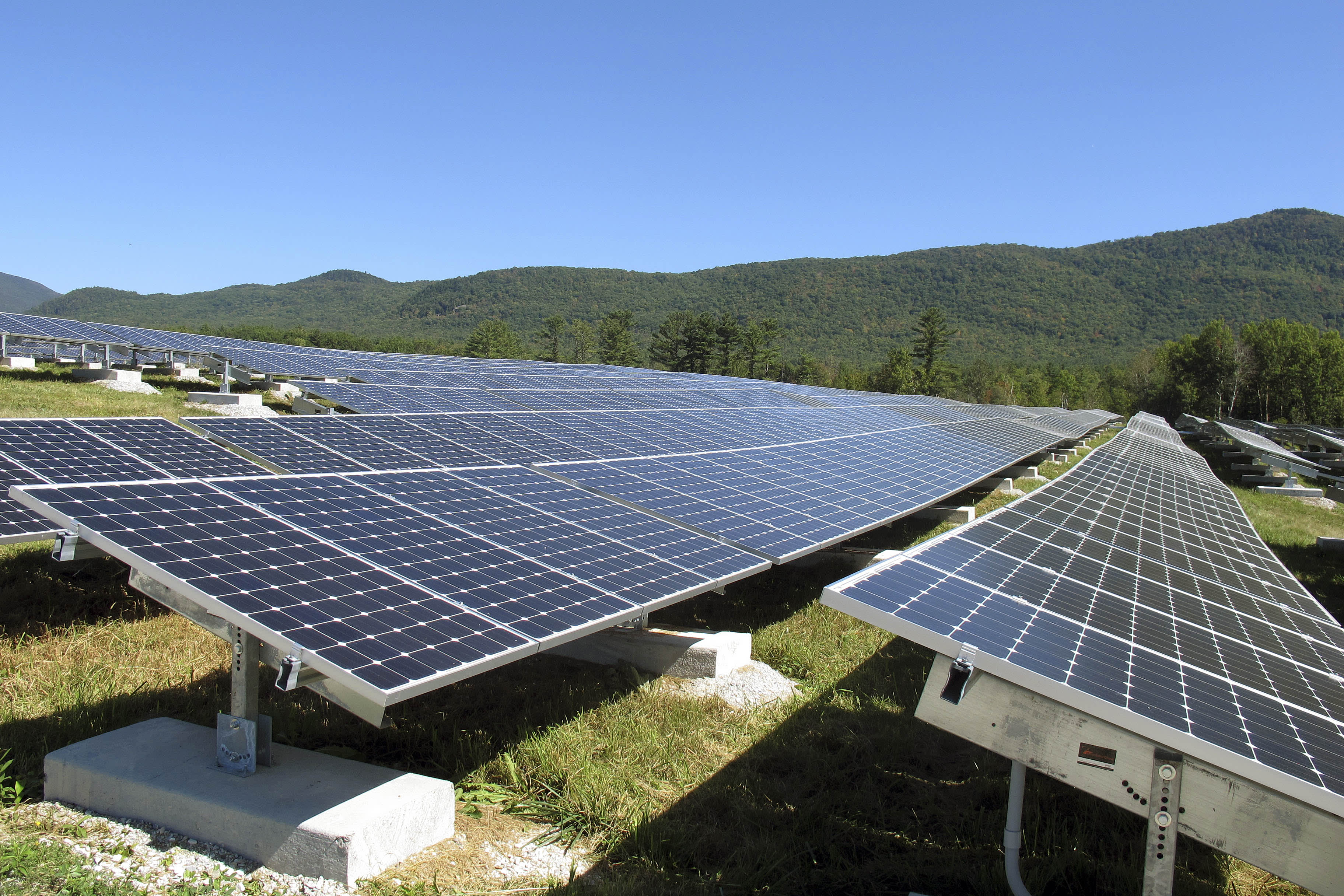 A portion of the Stafford Hill solar power project gathers energy from the sun in Rutland, Vt., on Tuesday, Sept. 15, 2015. With the completion of the project developed by Green Mountain Power, Vermont’s largest electric utility, the city of Rutland claimed it has more solar capacity, 7.8 megawatts, per capita than any other city in the New England region.Wilson Ring | APLONDON — Google is backing a climate change start-up founded by an ex-DeepMind employee through its philanthropic arm, Google.org.Open Climate Fix, a non-profit lab focused on reducing greenhouse gas emissions, announced Tuesday that it had been awarded over £500,000 ($686,350) by Google.org’s Impact Challenge on Climate, which has committed 10 million euros to funding new green technologies.The London-headquartered start-up is aiming to build an online solar electricity forecasting service for the U.K. and Europe.The service will aim to predict cloud cover, which determines how much electricity solar panels can generate, through a combination of satellite images and new artificial intelligence software.Jack Kelly, the co-founder of Open Climate Fix and a former research engineer at Alphabet-owned DeepMind, told CNBC on Tuesday that the U.K. currently has to keep “lots of fossil fuel generators spinning at less than their full capacity” in case “a large cloud comes along and covers Cornwall.”These generators are a lot less efficient when they’re ramped down, said Kelly.”It would be more fuel efficient and more cost efficient to run a small number of generators at nearer to their max, but that requires that we have better forecasts because to do that you’re running the system with less headroom,” he added.Open Climate Fix hopes that its solar forecasting service will provide better forecasts to electricity grid operators so they can make more accurate predictions.Kelly said the company is currently in talks with National Grid, which owns and operates the infrastructure that provides electricity to homes and businesses around Britain. National Grid was also talking to DeepMind at one stage but ultimately the talks didn’t come to anything and climate change has fallen down the agenda at DeepMind.The entrepreneur added that a lot of legacy energy companies are not very good at innovating.”That’s not their fault,” he said. “They have heritage, of 100 plus years, (of) building large bits of physical hardware and they haven’t historically been innovators in software and data.””We hope that by taking cutting edge research and modern approaches to building computer systems that it’s possible to massively improve the efficiency of the electricity system.”DeepMind co-founder and CEO Demis Hassabis told The Guardian newspaper in 2016 that no one had ever left his company, despite it being five years old with hundreds of staff. Fast forward a few years, and DeepMind now has around 1,000 staff and several former employees have quit to start their own businesses.Other examples include former DeepMind energy lead Jim Gao, and staff research engineer Vedavyas Panneershelvam, who now runs an AI company called Phaidra. Elsewhere, former DeepMind engineering executive Andrew Eland left to set up a new startup that aims to find ways to improve towns and cities.Rowan Barnett, head of Google.org for EMEA and APAC, said in a statement: “Among the many applications we’ve received to our Google.org Impact Challenge on Climate, the expert jury were convinced by Open Climate Fix’s innovative and tech driven approach.””We know that artificial intelligence can have a transformative impact when applied to challenges in the climate change sector, and we’re excited to be supporting this work.”Kelly said the money from Google will mostly be used to expand the size of his team, which currently sits at three people.Google also backed a company called Normative, which helps companies automatically compile carbon reports, and Dark Matter Labs, which is building a financial platform to support investments in urban forest management and restoration.Other tech giants including Microsoft and Amazon are also investing heavily in technologies that have the potential to reduce carbon emissions, as are the company’s billionaire founders.