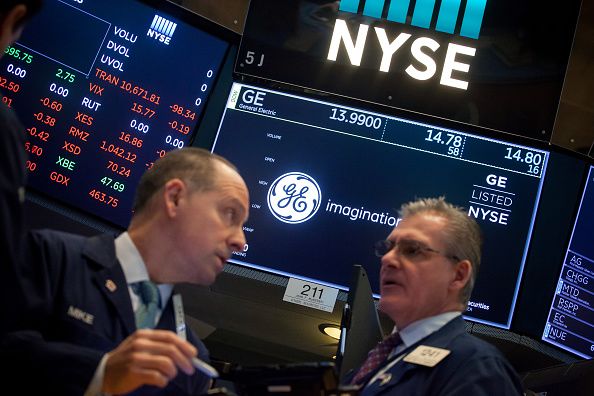 Traders work beneath a monitor displaying General Electric Co. signage on the floor of the New York Stock Exchange.

General Electric— Shares of GE plummeted 11.3% after Madoff whistleblower Harry Markopolos accused the company of issuing fraudulent financial statements to cover up its problems. Markopolos took aim at past and present executives in his report and said that GE is “a bigger fraud than Enron.”

Tapestry— Shares of Coach and Kate Spade owner Tapestry cratered 22.6% after the company missed on its fourth-quarter revenue. Tapestry reported revenue of $1.514 billion, missing analysts estimates of $1.533 billion, according to FactSet. A glaring weak spot in the report was Kate Spade’s larger-than-expected drop in same-store sales of 6%, while analysts expected a drop of 1.39%.

Cisco— Cisco shares plunged 8.6% after the tech giant gave poor guidance, saying its earnings would be lighter than expected as a “significant impact” from the U.S.-China trade war weighted on the business. The tech giant also said China revenue fell 25% last quarter on an annualized basis.

Pivotal Software— Pivotal surged a whopping 68.7% after VMware said it’s in talks to acquire the software company’s Class A shares for $15 a piece. Pivotal’s stock had declined 66% in the past year before the announcement as the company took a hit from weakening demand for its cloud applications.

Shake Shack— Shares of Shake Shack rose 7.1% and hit a new 52-week high on Thursday after SunTrust raised its price target on the restaurant chain to $102 per share from $86 per share. The analysts at SunTrust said they expect the company to add new menu items next year and for it to benefit from an exclusive delivery partnership with Grubhub.

Alibaba— Shares of the e-commerce company rose 2.9% after announcing better-than-expected revenue and earnings for the June quarter. The company reported diluted earnings per share of 12.55 yuan, compared to the expected 10.25 yuan according to Refinitiv estimates. The company has experienced growth with its successful cloud division and core commerce business, including the shopping platforms Tmall and Taobao.

— CNBC’s Elizabeth Myong and Jesse Pound contributed to this report.