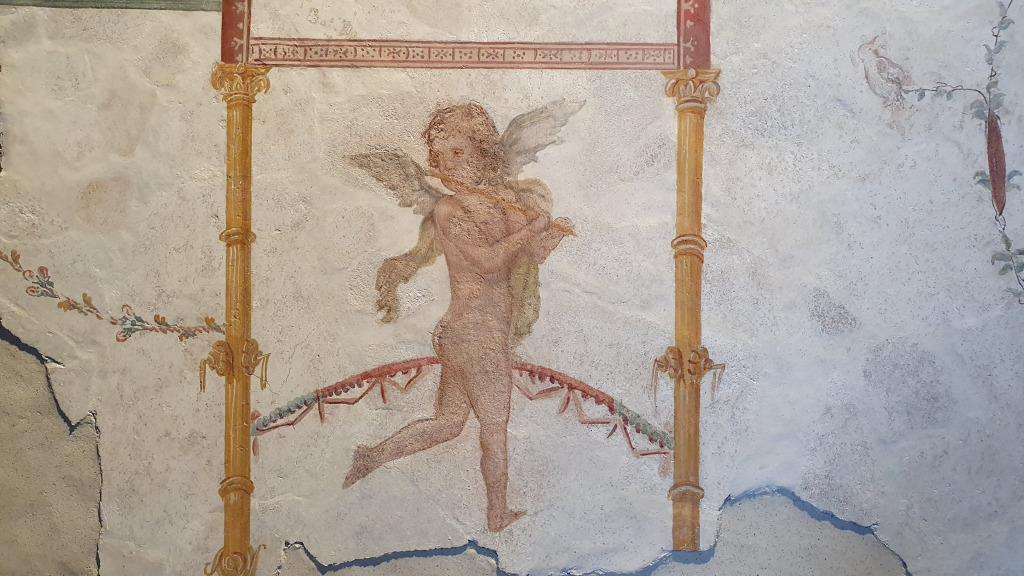 The archaeological park at Pompeii is celebrating the return of six Roman frescoes that have been recovered following an investigation by Italy’s cultural heritage protection unit, the Guardian reports.
Three of the frescoes were removed in the 1970s from the walls of Villa Arianna and Villa San Marco in the ancient city of Stabiae. After being smuggled out of the country, they were bought in the 1990s by antique dealers in Britain, Switzerland, and the United States.

The frescoes date to the first century C.E. and feature a variety of motifs. One panel from Villa Arianna depicts a dancing woman holding a tray. A second from the same location shows a flute-playing cherub under a pavilion decorated with plants and two griffin statues. A piece from Villa San Marco features a woman’s face on a dark background with a wreath of laurel leaves.

Three other fragments come from Civita Giuliana, a rural villa north of Pompeii. Before archaeological work there began in 2017, the site was the target of clandestine excavations. Investigations by the Italian police revealed that thieves had tunneled into the Roman villa through a covered hole in the ground.
In 2020, archaeologists at Civita Giuliana uncovered a stable with the remains of three horses and a four-wheeled ceremonial chariot, as well as two intact victims of the eruption of Mt. Vesuvius.
The ancient Roman city of Pompeii was almost perfectly preserved when the nearby volcano erupted in 79 C.E. Twenty feet of ash and volcanic debris quickly descended, and the ruins lay undisturbed for almost 2,000 years, providing invaluable insights into the life and times of its residents. Gabriel Zuchtriegel, director of the Archaeological Park of Pompeii, said “the city of Pompeii was part of an ancient landscape made up of communication routes, villas, farms, necropoli, and rural settlements,” noting its “immense value of the archaeological heritage” in the region.

After Multiple Postponements, TEFAF Maastricht Cancels 2021 In-Person Fair
How Artists Are Supporting Victims of the Israeli-Palestinian Conflict
To Top
error: Content is protected !!