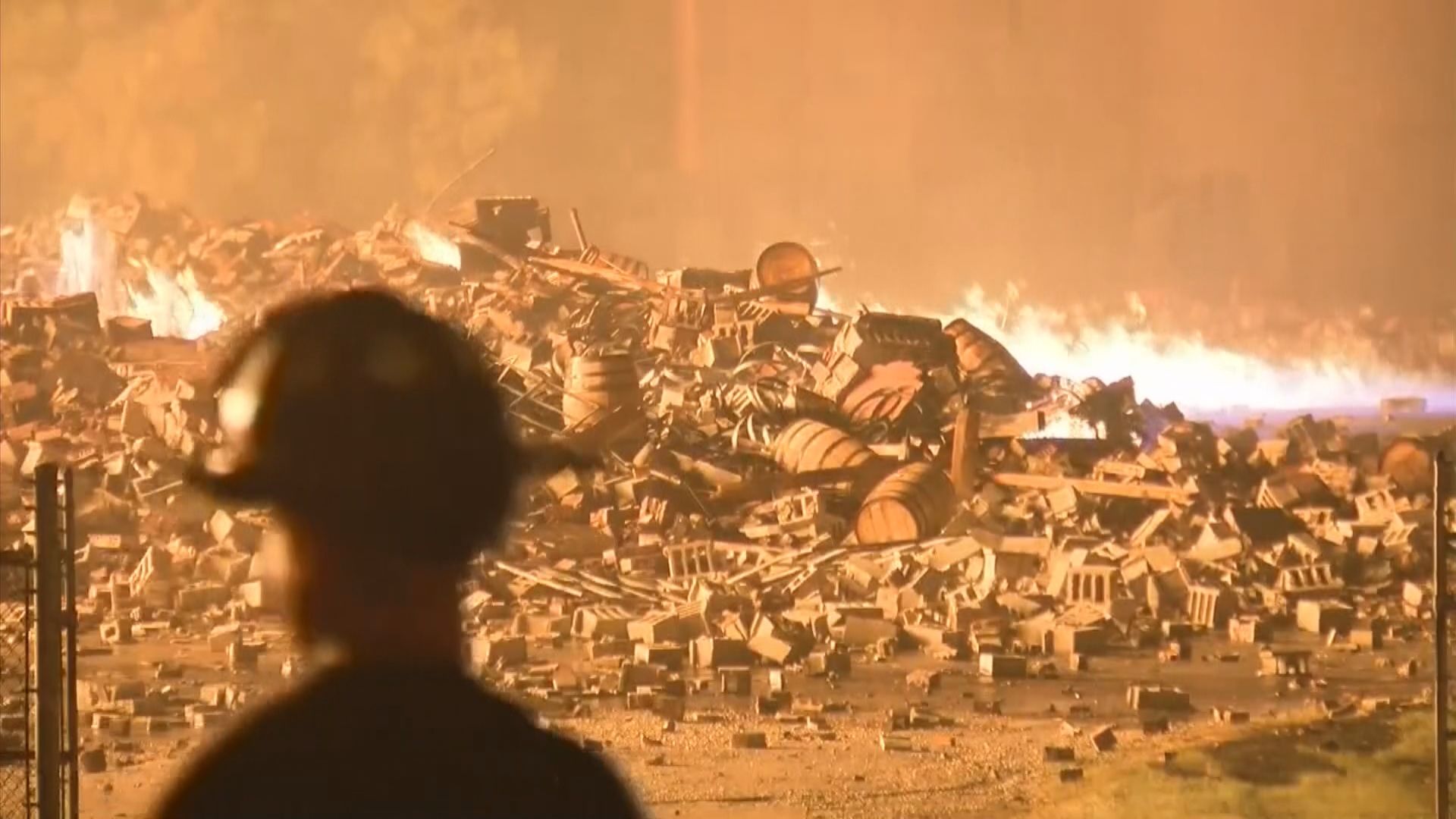 A firefighter on site of a fire at the Jim Beam warehouse in Woodford County, KY.

The fire that destroyed a massive Jim Beam warehouse filled with aging bourbon in Kentucky continued to burn Thursday as officials said the decision on whether to extinguish is still a day or two away.

Woodford County Emergency Management Director Drew Chandler said in a telephone interview the only thing left burning is ethanol fumes. Officials believe letting the fumes burn will have less environmental impact than spraying the fire with water, which could wash the bourbon into a nearby creek that flows into the Kentucky River.

An unknown amount of bourbon has already entered the water and was clearly visible on the Kentucky River on Wednesday. Officials from the Environmental Protection Agency have been on the scene since Thursday to help assess and contain the damage.

No one was injured in the blaze that erupted late Tuesday in the warehouse near the Woodford-Franklin county line, where about 45,000 barrels of bourbon were stored. It sent flames that could be seen for miles, shooting into the night sky and generating so much heat that firetruck lights melted.

Lightning might have been a factor, but fire investigators haven’t been able to start looking for the cause.

Chandler said Thursday that all the barrels have burned and the liquid has pooled in the foundation.

“But there’s so much debris, we can’t see how much liquid is left,” he said. The debris includes bricks, cinder blocks and metal, including the bands that held the barrels together.

Chandler said heavy equipment is being brought in to move the debris, but so far the fire is too hot for the equipment to get very near the site. A fire crew was standing by on Thursday and law enforcement agents were at the site to prevent trespassing, he said.

The Kentucky Energy and Environment Cabinet said in a news release that runoff from the fire is expected to create low dissolved oxygen levels in the Kentucky River and its tributary, Glenns Creek, which could result in substantial fish kills.

Beam Suntory officials said they are working with authorities to assess environmental effects.

The distilling company said the multistory warehouse contained “relatively young whiskey,” meaning it had not reached maturity for bottling for consumers. Bourbon acquires its color and flavor while aging for years in charred new oak barrels.

“Given the age of the lost whiskey, this fire will not impact the availability of Jim Beam for consumers,” the spirits company said in a statement. The destroyed whiskey amounted to about 1% of Beam’s bourbon inventory, it said.