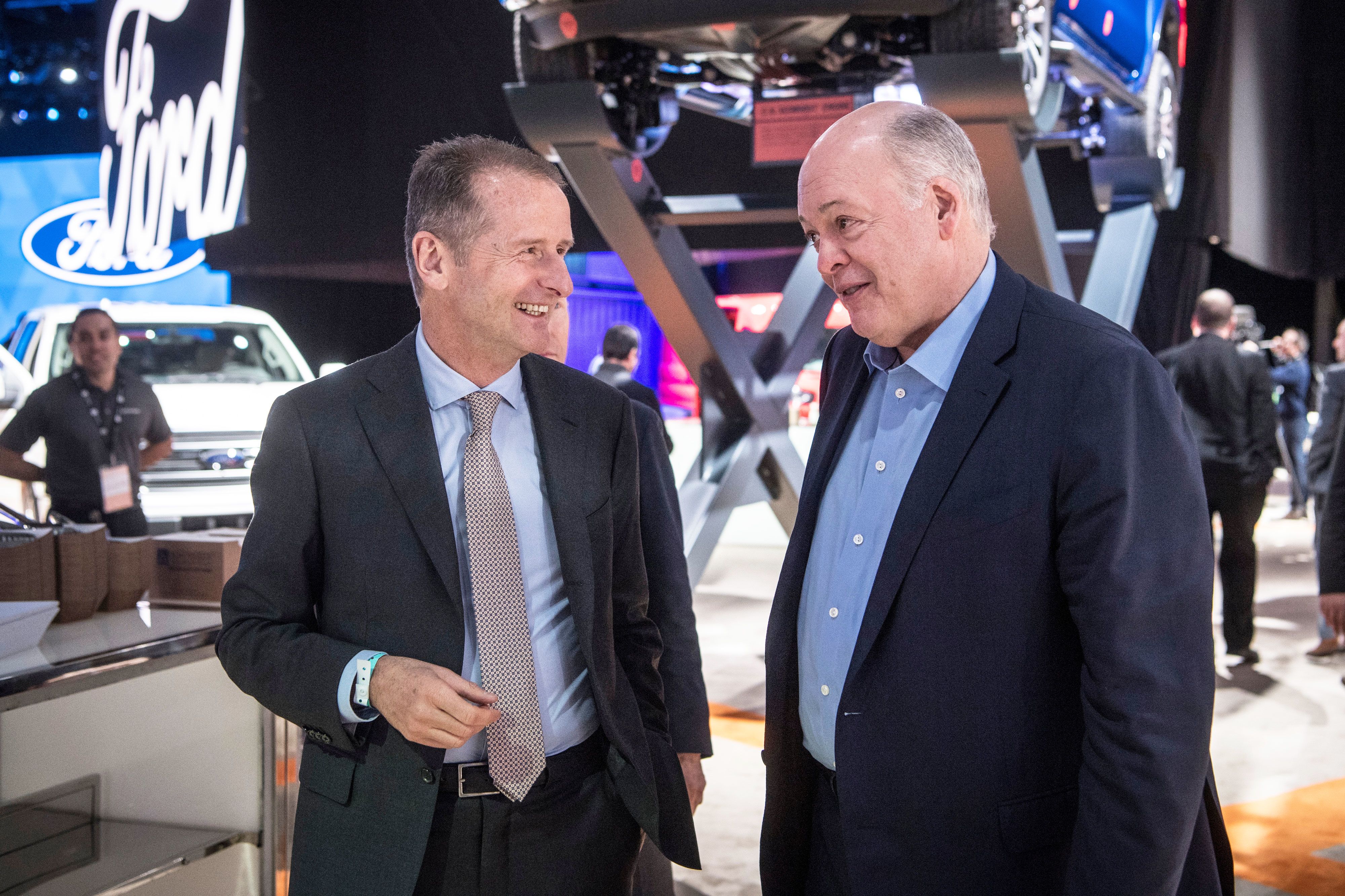 Ford and Volkswagen plan to announce Friday new joint ventures on autonomous and electric vehicles, two technologies considered critical to the future of the auto industry.

The deal calls for “billions of dollars” in investments and will allow the companies to share both intellectual property and hardware, according to company executives with first-hand knowledge of the negotiations.

The companies have scheduled a joint press conference at 8 a.m. ET in New York Friday, saying they will “provide an update on their global alliance” and “share details of new collaborations also aimed at better serving their customers while improving each company’s competitiveness and capital efficiency.”

The companies declined to provide further details on their announcement.

But the executives, who asked not to be identified because the deal wasn’t yet public, say Volkswagen will provide Ford with access to the underlying platform that will anchor dozens of electric vehicles the German automaker plans to bring to market by mid-decade.

VW also will become an investor in Argo AI, a Pittsburgh-based research firm specializing in autonomous vehicle development, the executives said. Ford became a lead investor in Argo in 2017 with an initial investment of $1 billion.

Ford and VW have been discussing ways to team up on a variety of business operations for more than a year. In January, they announced their first tie-up, a joint venture focused on commercial vehicles, such as the Ford Transit van.

At the time, officials from both companies confirmed they were looking at other opportunities.

“In such [a competitive] environment, it just makes sense to share investments, pool innovation capabilities and create scale effects that are clearly defined,” Volkswagen CEO Herbert Diess said at the time.

Scale will be one of the benefits the two manufacturers hope to leverage with the joint ventures, both of which are being presented to the Ford and VW boards for final sign-off Thursday, the executives said. Together, the automakers produced about 18 million vehicles in 2018, or roughly 20% of the global new vehicle market.

As part of the new joint venture, Volkswagen will also invest in Argo, which operates as an independent company. One of the executives said VW’s investment in Argo will “be in the billions,” reflecting the significant increase in value of the tech firm since Ford took its stake more than two years ago.

The race to come up with self-driving vehicles has been joined by dozens of global automakers, as well as tech companies like Waymo and China’s Pony.ai. A study released by AlixPartners last month estimated the industry’s annual spending on autonomous driving and electric vehicles will reach a combined $85 billion and $225 billion, respectively, by 2025.

That is something that will strain corporate budgets, drive down profits and lead to even more joint ventures like the one Ford and VW are announcing, said Mark Wakefield, the head of the consulting firm’s auto practice.

It could also lead to “consolidation happening in the next couple of years,” James Peng, the co-founder and CEO of Pony.ai said on an interview on CNBC that aired Wednesday.

Volkswagen has committed 9 billion euros, or more than $10 billion, on its “electrification” program so far. That includes hybrids, plug-ins and pure battery-electric vehicles, or BEVs, with for nearly 50 different hybrid and electric vehicles by 2025 through its various brands, including  its flagship VW, as well as Porsche, Audi and Bentley.

In March, CEO Diess increased the German automaker’s estimate of BEV sales over the next decade from 15 million to 22 million euros, declaring, “The supertanker is picking up speed.”

The joint venture, as it currently stands, calls for VW to provide Ford with access to its MEB platform which serves as a base for the ID.3, the first long-range all-electric Volkswagen model, as well as a range of other products to be sold by brands such as Audi. The deal isn’t expected to give Ford access to a more advanced electric vehicle platform that will be used for VW’s high-line models such as the Audi e-tron GT set to go on sale in a couple years.

Argo AI will set up its first office in Europe to work closely with VW, said one of the executives. The company’s currently testing modified Ford products in 5 U.S. cities and will add similar programs in Europe.

Ford, which has committed $11 billion to battery-car development will share some of its own know-how, but not all of it. The U.S. automaker is developing its own long-range BEV platform which will make its debut later this year in a high-performance, “Mustang-influenced” SUV. And VW will not participate in the new joint venture pairing Ford with Rivian, a battery-electric vehicle start-up based in the Detroit suburbs.