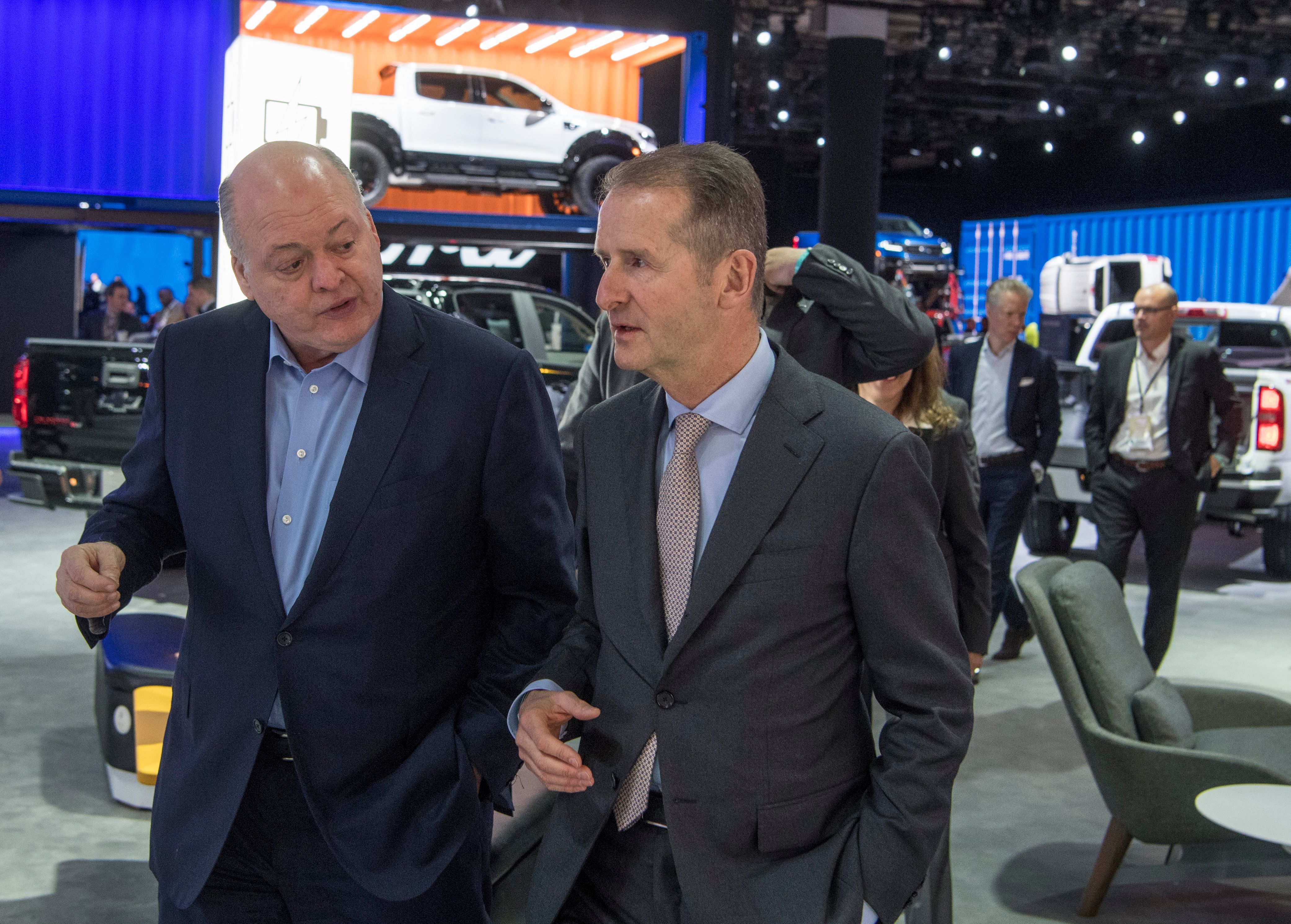 Ford Motor and Volkswagen officially announced the expansion of their global “collaboration” Friday morning, adding autonomous and electrified vehicles to the list of projects that began with January’s announcement of a joint venture covering commercial vehicles.

The expanded alliance now will add two of the most significant, albeit costly, technologies expected to dramatically reshape the global auto industry over the coming decades. The high costs involved in the development of self-driving and battery-electric vehicles already have fostered a series of joint ventures and other collaborations across the auto industry, often involving traditional competitors like General Motors and Honda, as well as BMW and Daimler.

Ford and VW will remain “independent and fiercely competitive in the marketplace,” the Detroit automaker’s CEO Jim Hackett said in a statement released ahead of a joint Friday morning news conference in New York City. However, Hackett added, “Unlocking the synergies across a range of areas allows us to showcase the power of our global alliance in this era of smart vehicles for a smart world.”

What one Ford official described as “the big deal” involves the development of autonomous vehicles, a technology proving more difficult to bring to market than many experts anticipated just a few years ago, said Sam Abuelsamid, a principle researcher with Navigant Research, a high-tech consulting company. It’s also proving far more costly than expected, according to a study by AlixPartners released last month that estimated industry-wide spending on self-driving vehicles will climb to $85 billion annually by 2025.

Ford has already invested billions by, among other things, setting up an outpost in Silicon Valley to tap that region’s know-how. In February 2017, it announced an investment of $1 billion in Pittsburgh-based Argo AI, a self-driving vehicle start-up.

Argo, which operates as an independent enterprise, focuses on what is known as “Level 4” autonomy, vehicles capable of operating without a driver, albeit in “geo-fenced” areas with well-marked roads and in reasonably good weather conditions. Argo already has test fleets operating in five U.S. cities, including Pittsburgh, Palo Alto, Detroit, Miami and Washington, D.C.

Volkswagen, according to a joint statement outlining the details of the expanded VW-Ford collaboration, “will invest $2.6 billion in Argo AI by committing $1 billion in funding and contributing its $1.6 billion Autonomous Intelligent Driving (AID) company.” That’s the automaker’s in-house autonomous vehicle development unit which currently has 200 employees. VW will also purchase $500 million in Argo shares over the next three years.

In turn, Argo will now set up operations in Europe that will include localized testing.

“This is a real validation of what Argo is doing,” said analyst Abuelsamid, since VW could have continued focusing on in-house development efforts. The German automaker recently ended its relationship with another self-driving start-up, Aurora.

Several senior executives who have discussed the Ford-VW plans in recent days said there were a number of potential advantages to the collaboration. Sharing costs is seen as a major plus, as is the scale of their combined operations which, in 2018, sold about 18 million vehicles worldwide.

There’s also the global footprint of the two companies, noted Argo CEO Bryan Salesky, who said in the joint statement his company’s “technology could one day reach nearly every market in North America and Europe, applied across multiple brands and to a multitude of vehicle architectures.”

Friday’s announcement also highlights the way Ford and Volkswagen plan to work together on the development of battery-electric vehicles, an area in which global automakers are expected to invest $225 billion from 2019 to 2023, according to the AlixPartners study.

VW so far has committed 9 billion euros, about $10 billion, to EV development. CEO Herbert Diess earlier this year upped his sales forecast for the coming decade from 15 million to 22 million battery-electric vehicles (BEV). The German company plans to have about 50 BEVs in production by 2025.

Ford, meanwhile, plans to invest $11 billion over the next five years, launching its first long-range BEV, a high-performance SUV, later this year. A mix of plug-in hybrids and all-electric models will follow. That now will include “at least one high-volume fully electric vehicle in Europe by 2023,” the joint statement noted, based on the modular MEB platform VW developed to underpin the majority of its future battery cars.

Abuelsamid said he believes that is “just the beginning,” and expects Ford will use the MEB “architecture” for still more products moving forward to gain even further economies of scale.

As is the case with so many of the current wave of auto industry joint ventures, alliances and other collaborations, the ones pairing Ford and VW won’t be monogamous. Ford, for one thing, will move forward with a separate partnership with Rivian, a suburban Detroit battery-electric vehicle start-up in which it announced in April a $500 million investment.