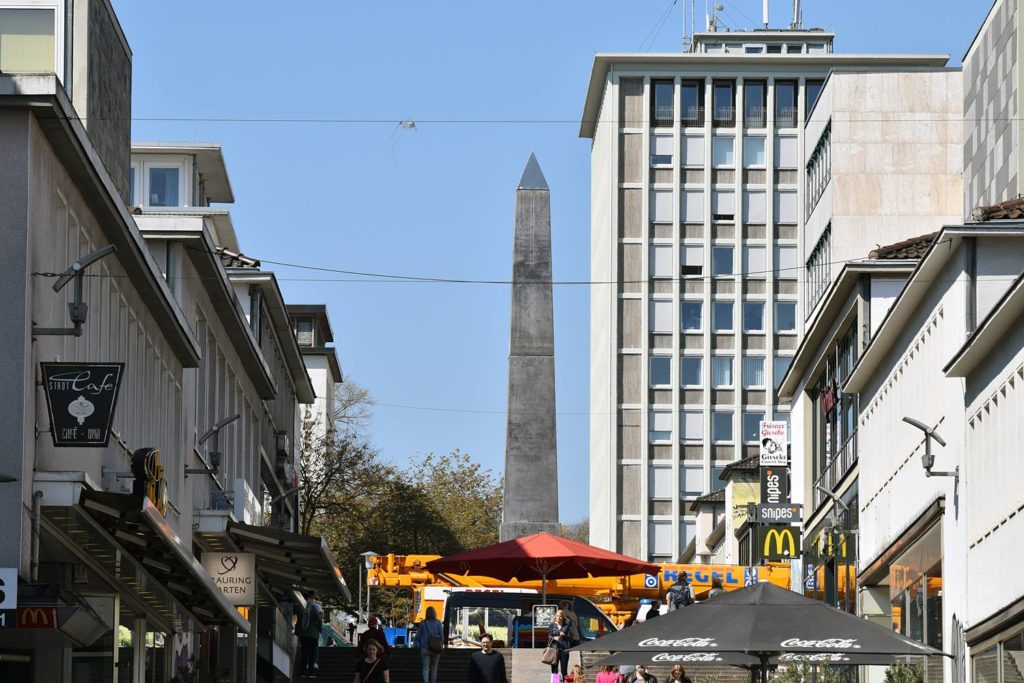 Though it only debuted two years ago, in 2017, at Documenta 14 in Kassel, Germany, Olu Oguibe’s 50-foot-tall obelisk sculpture Das Fremdlinge und Flüchtlinge Monument (Monument for strangers and refugees) has already had a complicated history. Originally shown in Kassel’s main square, it was acquired by the city government but entered a limbo state after being taken down at the conclusion of Documenta. But now—for the time being, at least—the controversy surrounding the work has come to an end, as the obelisk officially returned to Kassel on Thursday, this time in a square nearby its first location.

“It means a lot to me that this important Documenta 14 art work is now permanently back in Kassel’s center,” Sabine Schormann, the director general of Documenta, said in a statement, adding that “the city society is now invited to welcome the obelisk to its new location at a citizens’ festivity.”

In a statement, Oguibe said, “I am glad that the obelisk will be rebuilt.”

From the first time it was shown, Oguibe’s work was viewed as a provocation by some local politicians. The work, which was shown in the city’s Königsplatz square during Documenta, features a quote from the Book of Matthew, “I was a stranger and you took me in,” in four different languages—Turkish, Arabic, German, and English. It celebrates the influx of foreign peoples in a country that has, in recent years, made attempts to close off its borders and restrict immigration, and so the work drew the ire of conservatives within country. In spite of this, Das Fremdlinge und Flüchtlinge Monument won Oguibe the Arnold Bode Prize, an award given during each edition of Documenta to one participating artist that comes with a €10,000 ($11,200) grant.

The controversy did not end there, however. When the city of Kassel announced in 2018 that it was acquiring the work for €126,000 (or about $140,000), via funds raised through crowdsourcing, with the intention of keeping it in the central Königsplatz location, right-wing officials lashed out. The price had been one source of contention—Oguibe originally said he would sell the work to the city for €600,000 (about $675,000), causing one person to scrawl the words “€600,000? Are you crazy?” onto the monument. The ideas behind the work were also an issue. Members of the far-right Alternative für Deutschland (AfD) party began targeting the work, decrying its message, and in October of last year, the city said it would remove the work, even after Oguibe tried to arrange for it to appear in a less central location.

“To say that the city leaders tried in so many ways over the course of the past year to avoid acquiring the work would be a gross understatement,” Oguibe told Hyperallergic at the time.

Then, a couple weeks after the removal was announced, the city went back on its decision and said it would display the work, with the stipulation that it could not appear in the Königsplatz. “We thank Olu Oguibe for conceding to the wishes of many people in our city,” Christian Geselle, the mayor of Kassel, said at the time. Now the work is situated in the Treppenstrasse, a street with shops and other works that have previously been acquired by Documenta, by artists such as Jonathan Borofsky, Janet Cardiff & George Bures Miller, and Lois Weinberger. To celebrate the work’s re-installation, the city will hold a street festival on May 11.