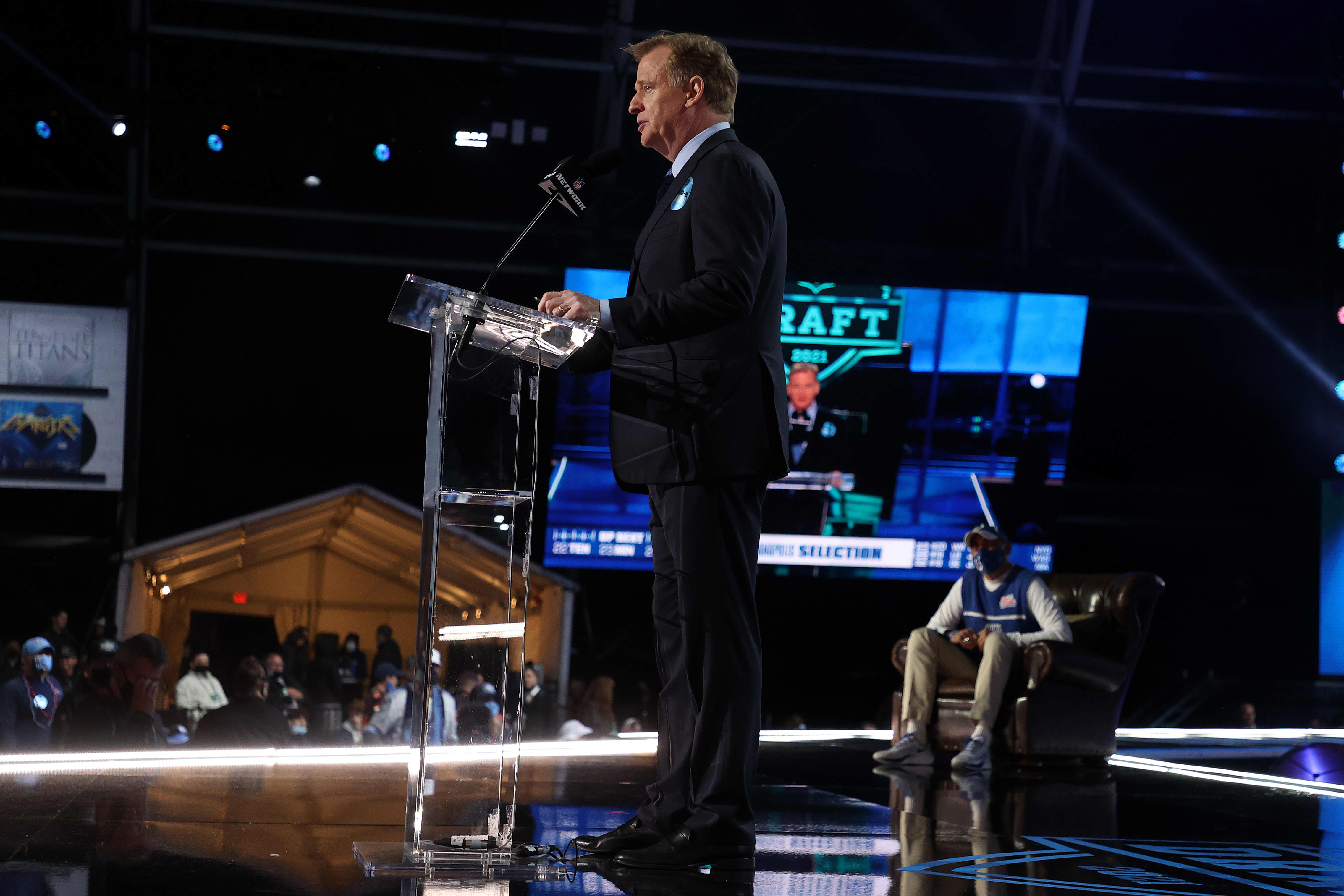 NFL Commissioner Roger Goodell announces Kwity Paye as the 21st selection by the Indianapolis Colts during round one of the 2021 NFL Draft at the Great Lakes Science Center in Cleveland, Ohio. (Photo by Gregory Shamus/Getty Images)Gregory Shamus | Getty Images Sport | Getty ImagesThe National Football League’s opening night of its annual draft event averaged 12.6 million viewers across three networks including ESPN and ABC.It didn’t top last year’s all-time high of 15.5 million viewers, but it was up 11 percent compared to 2019 draft (11.4 million). Prior to last year, the all-time high was 12.4 million viewers in 2014.  The 2020 NFL Draft was an all-virtual event due to Covid-19.The Jacksonville Jaguars drafted ex-Clemson quarterback Trevor Lawrence with the 2021 first overall pick, followed by the New York Jets taking BYU’s Zach Wilson. Overall, five quarterbacks were selected in the first round and 18 offensive players. It’s the most since teams drafted 19 offensive players in 2009.This year’s draft returned to a live event format on public grounds in Cleveland. A vaccinated Roger Gooddell embraced players who were drafted, and the NFL commissioner was also accompanied by one fan on stage for each pick.Las Vegas is selected to host the NFL Draft in 2022. The draft event was initially scheduled in the city last April but canceled due to the pandemic.Ja’Marr Chase, Trey Lance, Kyle Pitts and Rashawn Slater stand onstage prior to the start of round one of the 2021 NFL Draft at the Great Lakes Science Center in Cleveland, Ohio.Gregory Shamus | Getty Images Sport | Getty ImagesThe 2021 draft continues Friday with rounds two and three. The remaining rounds (four through seven) are scheduled for Saturday. The draft is televised on Disney properties ABC and ESPN and the league-owned NFL Network.

As more retailers turn to tech, Macy’s store employees score victory in challenging self-checkout in mobile app
Live music concerts are starting to reemerge in the Covid-19 recovery. Here’s what you can expect if you go
To Top
error: Content is protected !!