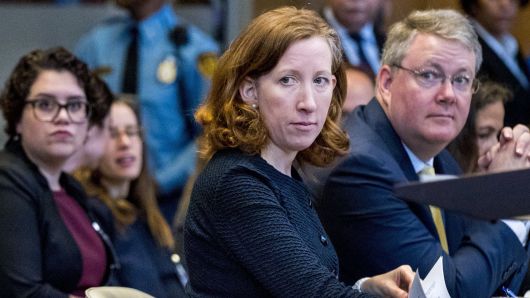 Jennifer G Newstead (C), lawyer of lawyer for the United States is pictured during the opening of case between Iran and the United States at the The International Court of Justice (ICJ) in the Hague, August 27, 2018.

Facebook announced on Monday that it’s bringing in a new general counsel and vice president of communications as it tries to rebuild its image following a year filled with scandals.

The company said Jennifer Newstead, the legal adviser to the U.S. State Department, is joining the company as its general counsel, replacing Colin Stretch, who said last year that he would be departing. Facebook also named John Pinette as vice president of global communications, succeeding Caryn Marooney, who announced her plans to leave in February.

Newstead, who was confirmed by the Senate in December 2017, is a government veteran, having previously worked at the Office of Management and Budget, the Department of Justice and as an associate White House counsel.

“Jennifer is a seasoned leader whose global perspective and experience will help us fulfill our mission,” said Sheryl Sandberg, Facebook’s Chief Operating Officer, in a blog post.

Pinette most recently worked as vice president of marketing and communications at Vulcan, the business and philanthropic group started by Microsoft co-founder Paul Allen. Before that, he led communications for Bill Gates’ private office and also worked at Google.

Facebook has seen an exodus of top talent since the company became embroiled in controversy following the 2016 presidential election, when the platform was manipulated by foreign actors and flooded with fake news. The company is now trying to regain the trust of users, lawmakers and even advertisers, and CEO Mark Zuckerberg has laid out his plans for a “privacy-focused” future.

Luckin Coffee files for US IPO
Apple 2020 iPhones will have 5G
To Top
error: Content is protected !!